The costs of Australia’s endless pursuit of growth

Our pursuit of 'population, participation and productivity' has created a strong economy. But it doesn't necessarily create a strong society.

After 28 years of steady economic growth, Australia is richer than almost anywhere in the world. But we’re also bitter, angry and divided. How can this be?

There are precisely two ways to generate economic growth. One is to use more inputs; the second is to combine inputs more effectively.

The latter is all about “productivity” (a dreadful and dreary word that economists love). Changes in technology and practice are the key to rising living standards, allowing us to make more from less. The fact a shirt cost a month’s wages in the 18th century and an hour’s wages today is because we can now combine inputs more effectively. Science, baby: the invention of the loom, the application of scientific principles to agriculture, etc.

The ballad of Ken Henry

This has been Australia’s plan. Former treasury secretary Ken Henry’s “three Ps” model (productivity, population and participation) put emphasis on using more inputs to grow the economy. The model was developed in the early 2000s, and soon became “integrated into the mainstream of policy thinking in Canberra”. 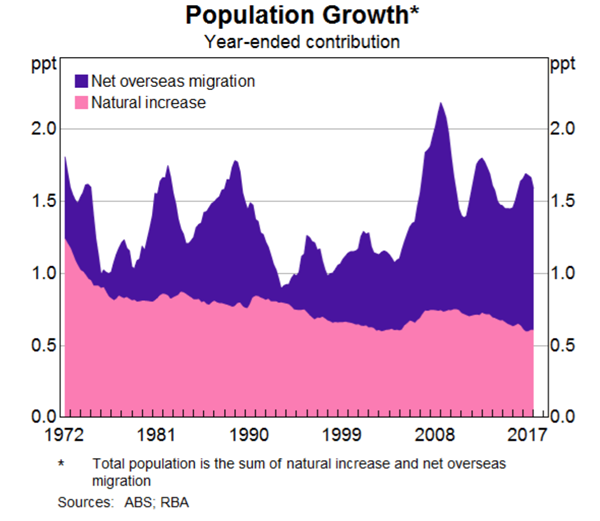 It is also around this time that Australia’s productivity growth falls: 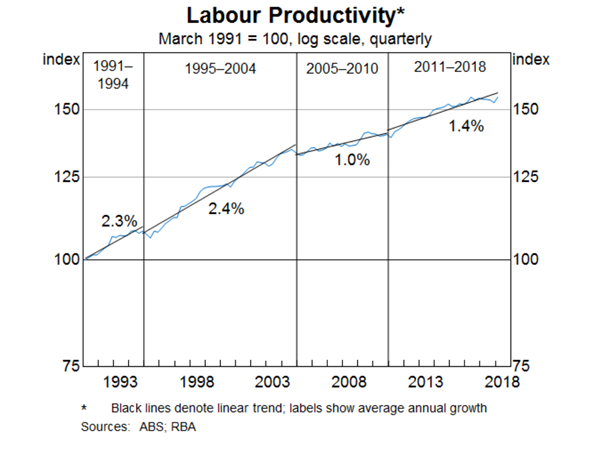 The influence of the three Ps model on Australian policy thinking remains pervasive in 2019. And that means the costs of growth are primarily found by looking at the downsides of population, productivity and participation.

You can create economic growth for a nation by growing its population — a policy Australia has pursued with vigour. This isn’t necessarily a bad thing. The benefits of a rising population are real and the costs can be managed if you build sufficient new homes and infrastructure.

But rising house prices in Melbourne and Sydney tell us that the number of new homes built may not have kept pace. And, as anyone who has tried to commute in an Australian city knows, higher population growth is straining transport infrastructure too.

Many of the frustrations and inequities of contemporary urban life — that feeling of being stuck in traffic trying to pay off a house — are exacerbated by the ways in which we have chosen to accelerate economic growth.

That frustration flows through to our politics, manifesting in policies that blame the migrants, rather than the policy-makers who failed to grow infrastructure and housing stock.

Australia’s labour force participation was expected to tumble as our population aged. Instead it has soared:

That retirement you were looking forward to? Ha. Time off to spend with your kids? Also not happening. No wonder we feel strained!

The lack of recent productivity growth reveals that the advances of the internet era have not created an enormous boom — at least not one that shows up in the statistics. This has sharpened calls to create productivity through economic reform.

Economic reform has a strong bipartisan legacy in Australia as a source of growth, from Whitlam’s tariff cuts to Howard’s privatisations. But these efforts to improve efficiency are not as good as scientific progress, because they are a one-off — not an ongoing process.

The pursuit of productivity through economic reform is at least partially responsible for our rising social exclusion and dislocation.

Of course, the costs of pursuing the three Ps framework have almost certainly been worth bearing. Nearly three decades of economic growth is without doubt better than the alternative and it is no use being wistful for the road not taken. Had we not pursued the three Ps framework, we would simply have other frictions and strains. But by focusing on these costs of growth we can better isolate them, better understand them, and better manage them.

Australian economic policy-making shouldn’t just be about creating growth; it also needs to manage the costs.

Another outcome of PPP: our continent is heading towards becoming an uninhabitable desert.

No worries, she’ll be right mate. The ultra-rich (ie, the true beneficiaries of PPP) will just sail off into the sunset in their mega-yachts while the rest of us starve as we deserve.

I don’t think life in Australia now is better than it was thirty years ago. I think that in many ways, it’s much, much worse.

Agreed. Melbourne hasnt had one area of improvement since the early 90s. Nothing better but a long list of things that are worse.

YOu cannot have infinite growth on a finite planet. It is time we learnt to manage without massive migration . According to Jared Diamond the sustainable population of Australia is about 8 million. Whoops.

Australia’s population growth is now 1.7% per annum. Well and truly in line with developing countries. Two thirds is down to immigration.
This is not acjeremiad about the evils of immigrants per se (I live with one) but the notion that growing the economy simply by relentlessly accelerating population sounds like economic theory 101 taught by at a TAFE course for property developers.
Despite our 28 year economic “miracle” per capita income has been falling. Surely that’s the only metric that counts?
As for the effect of our population growth on the environment: where to start?
Let’s go with CO2 emissions. The carbon footprint of a person increases 5-10 fold by moving him/her from a developing country to a developed country. Moving people from one place to another is more than shifting the deck chairs on the titanic.
Amenity: traffic anyone?
The endless circle where you build infrastructure to cope with population growth which in turn is required to fund said infrastructure is intellectually vacuous.
And is therefore trotted out endlessly.
Finally if turbocharged population growth is such a great idea why aren’t all western countries doing it?

I think that the reason that we haven’t seen the productivity growth expected from the internet boom as you put it is down to the nature of our economy: we are largely a primary producer – ie. Our main exports are agricultural and minerals. While we have seen productivity increases in these industries due to technologies like robotics and big data analytics, these industries are probably not as capable of productivity ‘revolutions’ as something like high-tech manufacturing or similar. It wasn’t enough to just expect a productivity boom from technology alone, we needed to have an economy and industrial landscape that was receptive to it.

‘After 28 years of steady economic growth, Australia is richer than almost anywhere in the world. But we’re also bitter, angry and divided. How can this be?’

Every privatisation has meant a short term gain to govt, massive profits to corporations and nothing but misery and higher costs for the hoi polloi. Housing prices through the roof. We’re still one of the highest land clearing nations and we wonder about changing rainfall patterns. The employment graph above needs a red line showing the decline in 40 hour jobs. Our drug laws are amongst the least effective in the world. We have a partisan parliament with luddites on one side and cowards on the other.

This is just a short list. No need to wonder why we are bitter, angry and divided?