Facebook has effectively washed its hands of doing anything to fix the spread of fake news and hate speech ⁠— and Australian politics will continue to suffer the consequences.

Now, in a US speaking tour, Mark Zuckerberg is making it clear that the platform is refusing to do anything about this. It’s obviously a huge issue in the US, where the twists and turns of Trumpian melodrama are shaped by fake news. But it’s also reflected in Australia’s own post-truth politics.

The world where politics was shaped by the open contention between truth and falsehood (as Milton declared some 400 years ago) seems gone. In its place, we have a world where the big tech platforms drown us in information, where objective truth is displaced from the centre of political debate by likes, shares and thumbs-up emojis.

Late last month, Facebook’s vice president of global affairs and communications (and former UK Lib Dem Party leader) Nick Clegg announced that Facebook will not apply its usual “community standards” to politicians’ speech on the basis that anything a politician says is “newsworthy content that should, as a general rule, be seen and heard”. Clegg also confirmed that the company would continue to exempt political advertising from third-party fact-checking.

The Clegg speech fell neatly after a private meeting between Zuckerberg and Trump — and just before Trump launched a $10 million ad buy on Facebook with false attacks on the Democratic co-front-runner Joe Biden.

It also coincided with reports of Zuckerberg meeting with other US right-wing figures. A leaked transcript showed Zuckerberg attacking Elizabeth Warren’s plan to break up Facebook. He was quoted saying: “if someone’s going to try to threaten something that existential, you go to the mat and you fight”.

These events have come together all at once to mark a seismic moment in how we should understand social media.

It’s not just that Facebook (and the other social media platforms) provide an opportunity for spreading soiled or destructive information, or that social media is polluted with bots and trolls; rather, it’s that the ad tech and algorithms that drive the revenue for the business, reward this sort of information by design. And it seems that the tech companies are unwilling to sacrifice the money they make by changing them.

Because any existential threat to Facebook can only come from US regulators, most reporting and analysis on these events has focused on what it means in a solely American context. But, its impact is just as great in Australia.

Take the “death taxes” lie, which was so influential in the recent federal election. This could not have occurred without the distribution that social media provided — enabling the targeting of demographics least likely to doubt, and most likely to spread misinformation through shares.

The removal of restraints on politicians’ speech is being exploited by extreme right-wing politicians, such as Pauline Hanson and Malcolm Roberts, in what is now a vicious circle: elected politicians can spread talking points on Facebook without restraint — providing an almost irresistible weapon to get themselves re-elected.

Traditional media once played the critical role of holding politicians to account on a standard of honesty, and real-time fact-checking and truth-telling. Thanks to this scrutiny, as recently as 2014, Barry O’Farrell stepped down as NSW premier for a misstatement over a gift.

This kept a self-serving relativism out of day-to-day political debate. Zuckerberg, on the other hand, can now dismiss demands for action by Facebook with a shrug: “misinformation is a pretty broad category”, he said in a recent Georgetown speech. Sure, we know that. But journalism spent close to 200 years building ethical codes and professional practices to deal with that very conundrum.

Of course, the work of journalism was often clunky and ineffective — go back no further to the industry’s embarrassment over Iraq and WMDs. It was often profoundly imperfect. But the striving for truth that underpinned the best of the craft provided better guardrails for political debate than the post-truth (non-truth) world that social media seems intent on leading us towards. 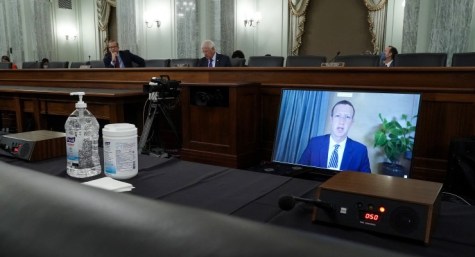 Christopher seems deeply confused about the difference between journalism and advertising, especially as it pertains to Australian politics. Or perhaps I am. Perhaps Facebook is showing that the difference is not what we thought it was.

Australian politicians have explicit exemptions from Trade Practices legislation about truth in advertising. They have always explicitly been allowed to lie in advertising. The lying that is being discussed here, by Trump, One Nation’s senators and around “death taxes” is being done through advertising, not journalistic or editorial output. Facebook is a publisher, but it does no journalism or editorial. It just provides a pipe large enough to shovel whatever content advertisers are prepared to pay for, for as many viewer-minutes as subscribers are prepared to consume it. Community standards applied to non-politician advertisements notwithstanding.

It’s true that there doesn’t seem to be any semblance of shame or contrition from the liars. Was there ever, though? Perhaps that’s where some of that Journalism should be being brought to bear.

I want to go along there Christopher but I keep thinking about the stock excuses for our phalanx of police state laws. Pedophiles and terrorists when the real targets are opponents and whistleblowers.

So I get dubious about social media restrictions just being about “fake news, hate speech and climate denial.” Like it or not Zuckerberg is right about fake news being a slippery concept. Everybody gets their own internet megaphone now if they want, not just RWNJs. I’d say a diet of “fake news, hate speech and climate denial“ is a pretty good description of a number of major traditional style media outfits that well pre date FB.

Yes, indeed, Mark, I am utterly tired of the dead tree media whingeing about social media as if it’s the cause of all their – and our – problems.
Politics and the media have been a dirty business forever, it’s just that now the journoes are not in the inner circle to the degree they used to be and are having a big whinge.
I certainly agree on regulating – and breaking up – facebook. But because of their power, not because of their supposed destruction of journalism and society.

And, while we’re at it, let’s stop calling them social media, they’re long past the point when they were largely user-controlled and -generated, us users are now far more consumers than creators on facebook and all the rest of the transnational digital platforms.

There nothing ambivalent about tech companies being “unwilling to sacrifice the money they make” it’s a core function of any business to maximize profits. A moral code doesn’t apply unless it’s applied from above or by external forces. Clearly Zuckerberg has no morals nor has his company. Socially this is unacceptable.

Mark Zuckerberg and Nick Clegg should think again, about the company the keep, as well as the company they run.
I was living in Sausalito, California when Ma Bell got broken up for being a monopoly and acting like a law unto itself.
Surely Nic remembers what it felt like when his doppelganger David Cameron stole his party and his power base out from under him. Some comfort could be derived from the resignation speech outside No 10, but, it won’t fix the past.

If Zuckerberg continues with the “hands off” approach to the forthcoming US and UK elections, and I know Facebook has good lawyers,they may find themselves tied up for years and facing jail time.

Facebook can not claim to be the innocent “social media”, the company; along with Snap chat and to a lessor degree twitter are just the latest advertising and publishing media and in the US the freedom of the press is guaranteed by the constitution, which is not so in the UK.

There are some acts which prohibit the rallying to violence, and other publications may come under a number of security acts including being agents for foreign interference.

As the tide of public opinion turns away from the loud psychopath as slowly but surely it is.
The people who were swayed and realize that they have been lied to, by what they had read on Facebook, and other unregulated publishers, their attitudes will harden.

I suspect it will be a matter of “Is it the truth or did you read it on Facebook”, in time.

Zuckerberg has lost, probably his only chance to save his business for the long run, by being to be non partisan

“Of course, the work of journalism was often clunky and ineffective — go back no further to the industry’s embarrassment over Iraq and WMDs.”

Jeez, that’s a bit of an own goal! A lie – and a patently obvious one – was ignored by “the industry”, even though there were some of the largest mass mobilisations against the war that the first world had seen for decades. A few relatively minor mistruths hardly compare to this massive lie that resulted in hundreds of thousands, if not millions, of deaths and continues to wreak havoc in the Middle East.

Come on dead tree media – move on! Your decades of contempt for your readers and viewers have come home to roost and there are few mourning your demise, as bad as that may ultimately be for society as a whole.