Via the Nine staff newsletter, Costello has diagnosed the rise of populism around the world as the consequence of central banks holding interest rates down. Low interest rates have “exacerbated this division between people with assets and people without assets … what’s going on at the moment is also exacerbating a division between savers and borrowers.” Having successfully diagnosed the problem, Costello prescribed the cure: deregulation. “I would argue monetary policy has run its course, fiscal policy has run its course, what we have to do now … is take away some of the handbrakes that are now applying to the economy … there has been a very big build-up in regulation in this country.”

The rise of populism has vexed politicians, economists, business people and sundry commentators the world over in recent years. Some of us have written books about it. Costello’s take at least has the refreshing character of novelty. But we confess we’re having difficulty following it.

We’re happy to put aside that as a politician Costello happily campaigned under the claim — wrong, as it turned out — that interest rates would always be lower under the Coalition. But his thesis seems to be that “sophisticated people” who borrow to acquire assets have benefited from low interest rates, while “poor people” (presumably too unsophisticated to borrow money?) haven’t. 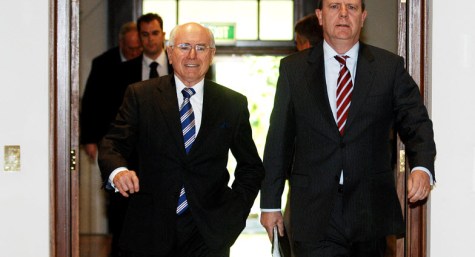 As for his prescription of deregulation, what kind of deregulation would he like? Industrial relations deregulation, like his WorkChoices program? That smashed labour productivity and drove the Howard government from office. How about financial services deregulation and the neutering of financial regulators, which Costello also presided over as treasurer? That was an inspired idea — we’re still counting the cost in billions in compensation from the big banks, hundreds of thousands of ripped-off customers, discredited regulators, hundreds of shattered lives and a banking sector that has fled from the integrated service model Costello helped them construct. How about energy deregulation? Yep, another winner from the ’90s and ’00s — so much so that Costello’s successors have introduced the most dramatic interventionist program in recent Australian history as a response.

Indeed, this is where Costello manages the impressive feat of being fundamentally wrong both in diagnosis and prescription. It was exactly the policy agenda that he presided over that helped create populism and the disgust for neoliberalism that his successors are now having to deal with via increased regulation.

The Howard-Costello agenda of deregulation, stripping industrial relations protections, destroying unions, undermining regulators and handing ever-greater power to corporations was what created the furious resentment of voters in recent years in Australia, as it did in other countries. They were furious because they endured wage stagnation imposed by powerful corporations while those corporations ripped them off, and avoided and evaded tax, while governments did nothing — or in the case of Howard and Costello, cheered them on.

Voters felt powerless in a political and economic system that worked for corporations and the politicians, like Costello, that they funded; inevitably, many turned to self-styled outsiders like Pauline Hanson or Donald Trump who promised to shake the whole system up.

Blaming central banks for trying to use monetary policy to address stagnation is a distraction from the real culprits — smirking neoliberal politicians who let corporations abuse their power so much that eventually electorates exploded in rage. That’s you, Pete. 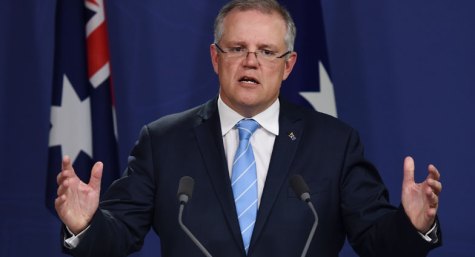 “The World According to Peter Cosjello” – has Howard been making these decisions for him too?

Negative gearing – rendering homes less affordable for “poor people”, as multi-holdings asset-rich competitors (buoyed by incentives paid from taxes of the less well-off) outbid/outpay “poor people” for houses/real estate.
Franking credits – “a tax return – to a person – of a tax not paid personally”?
On-going middle-class welfare paid for from the proceeds of their mining boom and ‘sanga and a milk-shake’ tax cuts rendered to buy votes; that restrict the capacity to raise sufficient future government revenue, needed to fund infrastructure for those increasingly “poor people”.

[Who wants to campaign on “raising taxes to meet necessary expenditure” – rectifying previous short-sighted, politically motivated, unsustainable, profligate (Howard-Costello) government policy – so services and infrastructure give way in whatever “present”.
Universities emasculated of funds turned to foreign students/China to fill that funding void? Look at that Howard/Costello “legacy”?]

Another brain fart from Dollar Sweetie. For his cohort the answer to pretty much any question is more flexibility and deregulation. Perhaps we could take his bullshit by the horns and suggest deregulating contract law or fraud or blackmail.

Even by the standards of this dullard this latest effort is just plain ridiculous.

Please keep in mind that this is one of the culprits in the removal of the Australian Standards Board and deregulation of just about everything.

With the teeth pulled from the Australian standards we have ignorantly assumed that things like dry board or cement board that goes in bathrooms and toilets for tiling would asbestos free; not so my dear chap! The use of asbestos isn’t illegal in China and so the discovery of it on a building being built by the government of Singapore, for the Queensland Government (thank you Campbell, we will have paid for it twice over by the time our lease runs out).

The PB (Poor Bastards) who have bought apartments with buildings covered by flammable cladding, down to them, why should the government ensure that building materials manufactured elsewhere and imported here not come up to standard.

Thank you so much for deregulation, it has been a god send to the CEO’s and chairmen of each of the boards, who had the good sense to take their bonuses derived from the destruction of so many lives by institutions and the deliberate under funding of APRA and ASIC and the ACCC who could have stopped the importation of all the dodgy financial products and activities that were so 1980’s USA style.

From the people living in sheds and caravans and with family as a result of the collapse of Storm financial, I’m sure you will get a rousing cheer!

The smirker is all you say Bernard and Glenn. The difficulty is, like the rest of his ilk, he’s still got his snout in the trough. No amount of outrage will dislodge him. Like the weather, he’s impervious to criticism and unaccountable.

Yep so outraged they voted the Libs/Nats, Torries and GOP back into power. And will probably do the same in Canada in a few weeks and NZ next year. Viva La Revolution.

Mate, the only reason the LNP slide in was because Joh Bejlke Petersen’s old spin doctor and leader of a party that doesn’t have a seat in parliament “The United Australia Party”, Clive Palmer spent $68,000,000 running an anti-Labor Party, mostly the primary vote stayed the same.

For all but the 3 seats that were treated to a “Death Tax” and grim reaper with Bill Shorten as the face and a clear explanation including how after mum and dad pop off they would be receiving 25% less than whatever the house was sold for.Shared 2,000,000 times about 5 times the population targeted and all on Facebook.

I wonder how many of them, now believe the Death Tax and how many of the desperate people of Townsville actually got paid the rest of their entitlements from the defunct Queensland Nickel,after receiving threatening texts, just prior to the election.

One wonders what will happen when the people planning on jobs at the Adani site or the now not needed rail line think.

Compering Canada and New Zealand to Australia is a stretch at the best of times and if the rise of the white supremacist and populist movements are anything to go by Australia, Canada and New Zealand have much further to go to reach that sort bottom of the barrel stuff.
What with Boris crashing the UK economy and the Trumpster acting like a petty thief , one hopes we will never get there.

They sort of do have mortgages. Their rent pays off the landlord’s mortgage.