JACKPOT! Is there a ‘good’ time to buy a lottery ticket?

Is there any point in playing the lottery? Crikey crunches the numbers behind the weekly Powerball draw.

The trick to running a successful lottery is simple: don’t give away the prize.

That’s the business model Australia’s licensed lottery operator has landed on with its weekly Powerball draw. And players don’t mind — quite the reverse. Call it a jackpot, add it to next week’s prize, and watch the ticket numbers soar.

In April 2018, Australia’s lottery operator — The Lott, owned by Tabcorp — dramatically changed the odds of Powerball such that winning the top prize was much harder, but winning the lowest prize (usually worth around $10.50) was easier. The odds of taking home division one with a single entry are now worse than one in 134 million.

Decreasing the odds of victory to such microscopic levels proved a masterstroke, with jackpots remaining un-won for months at a time and mounting to record levels. In September, Powerball had a $150 million jackpot and sold more than 200 million tickets. The following graph shows the last two years of Powerball, with the rule change occurring about six months in: 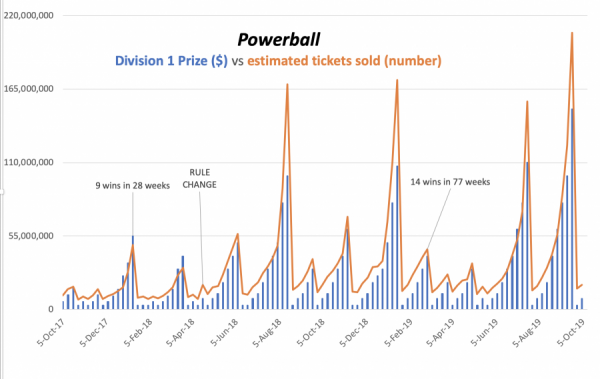 The response to a high jackpot is dramatic. Tickets sales rise 10-fold or more. In a 2019 press release from the lottery operator, one franchisee enthused about how the big jackpot was drawing crowds into his suburban Melbourne newsagency. “We’d had a big week before in the lead-up to the $80 million draw, but from Friday morning onwards when everyone saw the Powerball jackpot to $100 million, tickets were flying out the door.”

Big jackpots help sell tickets even after they’ve been won. The graph above shows the lowest ticket sales in the contemporary era are in May 2019. That lull followed a series of low jackpots. It is always hard to sell a lot of tickets for a $3 million division one prize. But it is a little bit easier the week after a big jackpot, when new players with a fresh taste for lotteries are still remembering how much of a thrill they got from having a ticket.

Life could be a dream…

The allures of a big jackpot are many: a house with harbour views, endless tropical holidays, telling your boss quite specifically what you think of them. But is there any more solid rationale to playing the lottery?

When the $150 million division one prize went off in September there were three winners who each took home $50 million. Big prizes attract more entries, and as the number of entries rise, so do the odds that someone chose the same numbers you did. Each time the jackpot has risen to $110 million or above, there have been multiple division one winners. Take that into account and the expected value plunges.

Nevertheless, the expected value of playing Powerball in a week with a high jackpot is much better than in a week where it’s a lowly $3 million. In this sense, there is some logic in the way lottery players respond to the higher jackpot.

The link from the size of the prize to the number of entries is not a mathematical one. It depends on how excited Australians get about a big prize. Record high jackpots tend to make the news and get people talking. But a record can be set only once. In August 2018, a $100 million jackpot was enough to sell an estimated 170 million Powerball tickets. By September 2019, the same jackpot led to only 130 million ticket sales.

Last week the The Sydney Morning Herald reported analysis by JP Morgan that forecast lottery ticket sales to fall 7% next year as jackpot fatigue takes hold. But for Tabcorp, which recorded an after-tax profit of $362 million in the financial year just finished, that’s unlikely to bother them too much. They’re still full of jackpot glee.

I refuse to ‘play’ the Lotto, particularly after I heard someone correctly state that if Jesus of Nazareth had played Lotto (if it existed 2,000 years ago)each week, and he was still alive today, he’d still be waiting to win a 1st division prize. You’d have to take a systems 7 ticket weekly for around 15,000 years to have a 50-50 chance of winning a 1st division prize, apparently.

Another reason is that I don’t need the money. An extra million, let alone 50 million, dollars won’t change my life. Not for the better.

I’m reminded of people’s unjustifiable hopes and expectations by the story of one Adolf Hitler and his friend August Kubicek buying a lottery ticket when they were schoolboys, and making highly ambitious plans as to what expensive items and property they’d buy when they won. They didn’t. I wonder whether AH’s unfounded expectations were a sign of a psychological disorder. Or whether the disappointment triggered the disorder.

When learning combinations and permutations at school our teacher said the Tattslotto divisions and payouts were incorrectly matched at that time. We calculated it and he was right. This was apparently known and legal though.

Gambling is mostly for mugs though and the best description is it preys on the mathematically illiterate. I’ve bought very small outlay lotto tickets for decades though on the premise that if you buy a ticket you probably won’t win but if you don’t buy you definitely won’t win.

I work on the assumption that if I don’t buy Lotto tickets, I will definitely win in not losing money, wasting time looking up the results and raising unwarranted hope of a win.