Good morning, early birds. Australia is predicted to miss its Paris Agreement targets by a large margin, and Turkey warns Australia against joining any sanctions movements as Ankara's invasion of Kurdish territory continues. It's the news you need to know, with Rachel Withers.

International Monetary Fund research shows that Australia is unlikely to reach its Paris Agreement commitment, even with a $111-per-tonne carbon tax, Nine reports.

The report argues that carbon taxes are the “most powerful and efficient tools” to limit global warming, finding most countries could reach their goal with a US$25 (A$37) per-tonne tax — but not coal-reliant Australia. “Even the US$75 [A$111] a tonne carbon tax falls short,” the report said, contradicting the government’s claims that Australia will reach its 2030 emissions reduction target in a “canter”. The fund also released a report on Thursday arguing that firms that ignore social issues risk going out of business.

The government has dispatched the Australian ambassador in Turkey to call for a halt to the Turkish invasion of Syria, and has called-in the Turkish ambassador to Australia to raise concerns over the attack, Nine reports.

Australian ambassador to Ankara Marc Innes-Brown, former ambassador to Iran and Iraq, has put the government’s concerns to counterparts in the Turkish capital, while Turkish ambassador Korhan Karakoç has brushed them off, warning Australia against joining potential sanctions. “If Australia joins the others in sanctions there will be a reaction from my side,” he told Nine. The Turkish offensive “continued successfully” on Thursday, with forces advancing deeper into Syria and targeting villages along the border.

MEETING OF THE MONEY MINDS

Federal and state treasurers will meet in Canberra today to discuss infrastructure and reform, in the first meeting of the Council on Federal Financial Relations since the May election, Nine reports.

The treasurers will look at ways to fast-track infrastructure projects, following demands from the Reserve Bank for governments to act, as well as considering “economy-building reforms”. Federal treasurer Josh Frydenberg refused a request from Queensland treasurer Jackie Trad for RBA deputy governor Guy Debelle to address the meeting on climate change, The Guardian reports, while Victorian Treasurer Tim Pallas has warned that state budgets will all be hit by the slowing economy.

We know that sometimes that will hurt in the short term, sometimes it will sting our passionate supporters who might prefer a pyrrhic parliamentary victory. But so be it.

The ALP deputy says the party must be prepared to disappoint supporters by helping the Morrison government pass legislation, as senior Labor Right MPs ­agitate for a policy overhaul to appeal to working-class ­voters ($).

Scott Cam: Coalition refuses to say how much TV star is being paid as ‘careers ambassador’

Call for increased scrutiny of research collaborations with China ($) 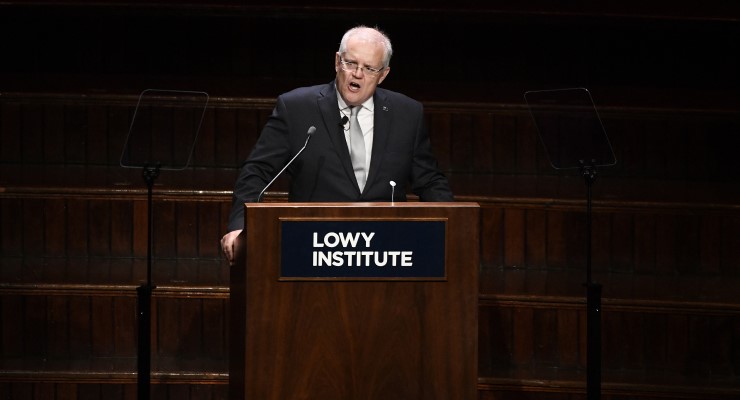 “Morrison and his team have crafted a global vision for local people, and in so doing renewed centre-right politics with a new mediation between populism and establishment liberal-conservatism which is right on the money. The only tiny problem is that it’s all a national pseudo-consensus based on our hugely leveraged and highly-sectionalised prosperity, which demands relentless growth. The whole thing will come apart very quickly if there’s any sort of serious faltering, and “the promise to/of Australia” will be a broken one. I’d take some political hope from that, if Labor weren’t tucking into the slipstream behind the Coalition hoping to glide to a narrow victory, and thus be even less likely to see the bump in the unquestioned ‘road ahead’, or the gap where it falls away entirely.”

“Trump’s former UN ambassador Nikki Haley argued that the US had to continue to, in effect, guarantee Kurdish security because of their contribution to the defeat of IS. But think that logic through: IS was created as a direct result of the illegal Western attack on Iraq by George W. Bush, Tony Blair, John Howard and other miscreants. IS then became the pretext for another military venture in the Middle East in 2014. Now we’re told that, as a consequence of that secondary venture, Western forces must remain there. These are literally ‘Endless Wars’, with each one creating the pretext for another venture justified by neoconservatives and the foreign policy establishment as crucial to security, stability and that precious commodity of ‘credibility’. For Trump’s critics there will never be a point at which the US, and other Western countries, should end their interventionism.”

“It’s rare that entrepreneurs implore governments to put them out of business by flooding the market — but that’s exactly what the duo behind a black market medicinal cannabis company want. A new Australian documentary, Green Light, follows two men running an underground medicinal marijuana ring as they prescribe and administer cannabinoids to patients who struggle to access it legally. Treating everything from a face tumour the size of a saucer, to a bump on a horse’s nose, the duo have tens of thousands of patients across the country.”

It’s no accident that girls are leading the climate movement – Niamh O’Connor Smith (The Age/Sydney Morning Herald): “School Strike for Climate started with just one girl: Greta Thunberg. Now it is a huge movement; 7 million people strong. In Australia, Milou, Harriet and Callum started the strikes in my home town, Castlemaine. You may have noticed some of the key players in this movement are girls. The person who started it all is a girl. Two of the three people who got the strikes going in Australia are girls. This empowers me and fills me with courage for the future of girls in leadership.”

Free trade gives wealth for toil ($) – Dave Sharma (The Australian): “The proposition linking growing trade with rising prosperity is under threat — from protectionist sentiments, increasing trade tensions and deadlock within the multilateral trading system of the World Trade Organisation. Australia has been a huge beneficiary from the liberalisation of the global economy. The ability to trade freely around the world on the basis of transparent and predictable rules has delivered us improved living standards, better jobs, higher wages and greater choice. This is why it is important for Australia to stand up for the global trading system and play our part to maintain and improve its liberal and open character.”

Is our PM Scott Morrison Trump-lite or a Trump true believer? – Micahel Pascoe (The New Daily): “Trump raves ignorantly about China’s developing nation status and Scott Morrison parrots that. Trump rants at the United Nations about patriots before globalists and Scott Morrison echoes that. And there was no need for the Australian Prime Minister to do any of the above. These were not cases of not wanting to offend the febrile American president. Each has been an unnecessary endorsement of Mad King Donald, the stuff of Rupert Murdoch’s Fox News commentators.”