How to make it big, big, BIG in investment publishing

Port Phillip Publishing is the largest independent investment publisher in the country. But its sensational approach has seen the business run afoul of regulators, competitors and even their own subscribers.

“A potential gold boom worth over 2000%!” “The Australian government, nationalising YOUR super?” “A USD implosion literally ending the American Empire.”

No, these headlines haven’t been ripped from a strange, libertarian, post-apocalyptic film, but from Australia’s largest independent investment publisher, Port Phillip Publishing (PPP), and its American owner Agora.

PPP made headlines last month when it was fined $600,000 by the Australian Securities and Investments Commission (ASIC) over a misleading article that promoted an investment strategy purporting to offer a “piggyback” on the government’s Future Fund. Former CEO Kristan Sayce was also fined $50,000 and disqualified from managing a corporation for 12 months.

This follows a 2016 infringement notice over its claim the government was nationalising superannuation. Earlier this year, IT consultant Steven Oakes was imprisoned for hacking into PPP’s private computer network.

Launched in Melbourne in 2005, Port Phillip Publishing has over 240,000 readers of their free newsletters and more than 40,000 paid subscribers. That Oakes spent four years hacking its system in order to get its stock tips ahead of publication should go some way to demonstrate the company’s influence.

The company puts out four free financial newsletters — often multiple times a day — and 15 paid newsletters, which cost between $149 and $3499 a year. It also publishes books, guides, and other syndicated publications.

A strong indicator of the company’s style can be found in editor Greg Canavan’s latest gold-centric campaign, which launched with a 14,000-word post spruiking a 1970s-like gold rush and consisted of two new reports and a trial for his “Crisis and Opportunity” newsletter. 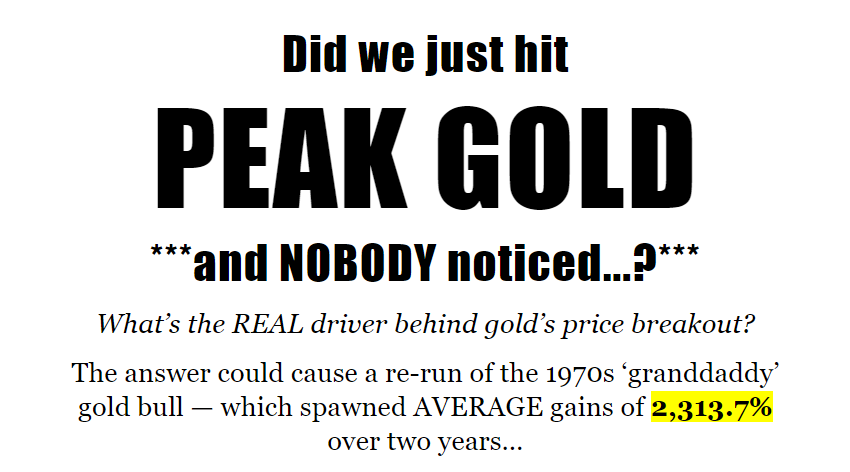 While the writing does make stock advice interesting, or at the very least readable, some observers say the company’s recent scandals are a natural consequence of the tightrope it walks with a business model founded, primarily, on copywriting.

“There’s two kinds of providers out there,” co-founder of trading advisory and research website The Chartist Nick Radge said. “There’s those that just kind of give straight information, and then those that use a lot of hype, a lot of fear, to deliver more or less the same kind of information. And Port Phillip Publishing, just like their parent company Agora in the US, fall into that second category, where, in my view, they sell reasonably simplistic types of products using fear, greed, hype.”

PPP makes some sensational claims. In maybe the most egregious example, US contributor Jim Rickards published an article, video and doomsday clock for a 2017 “trigger event” that would “effectively END (sic) the American Empire”. PPP is also renowned for absolutely pumping out content. One free subscriber tells Inq they received 51 emails from PPP in one week in September.

At a time when Australian newsrooms are shedding staff, PPP is also notable for a steady flow of SEEK advertisements, largely for copywriting roles with no financial qualifications required. Canavan told Inq the company employs 41 salaried staff and five contractors, who are supervised by an experienced copy chief.

“Given the unique nature of our industry and our business, it’s difficult to find copywriters ‘off-the-shelf’ to write long-form financial promotions,” Canavan said. “That’s why all new trainee copywriters — regardless of experience — have to undergo a six-month probation, and they are put through a comprehensive training, education and mentorship program before they are given a full promotion to write.”

But while PPP’s official analysts are qualified, ASIC found during the Future Fund case that the line between author and copywriters was blurred. Not only was credited author Matt Hibbard not the primary author of the promo letter nor a retirement income expert, but parts of the promo letter were copied by a PPP copywriter from a promotion published by a related entity of PPP in the US about piggybacking off Canadian social security.

Canavan told Inq that, as a consequence of the Future Fund “experience”, PPP had taken a number of steps to improve its compliance framework and internal controls, including the use of an online workflow system.

Whatever the editorial standards, a quick glance at investor forums finds two major complaints from PPP’s readers. The first is the erratic tone of its messaging, which ranges “from doomsayers to wildly enthusiastic”. The second is the daily barrage of emails — “none of which”, a former paid subscriber told Inq, “tell you anything except at the bottom, when you find out that you have to subscribe to a service which contains the information which was offered in the first place”.

But PPP is not alone among financial advice newsletters running afoul of the regulator. One competitor, Fat Prophets, was told by ASIC in 2002 to email subscribers and slash 10% off all its recommendations.

Still, complaints about receiving emails titled “Why the market could crash 10% in 11 days’ time” and, minutes later, “Why you’re waiting for a crash that will not happen”, have apparently not gone unnoticed by the publisher. The final query on their frequently asked questions page is about “mixed messages from different authors”, and leaves with a faintly hilarious piece of buyer beware advice:

“Ultimately, we have no idea of what the future holds.”

Back to school for investors: ASIC’s exam for ‘complex’ buys

Is it safe to hand your banking passwords over to finance apps?

Some thieves are getting literate, sophisticated, ever more cunning, in the quest for reward by evil filth, rather than honesty. Business and any publicity, advice, advertising, online report , etc, is useless, a manipulation and inducement to part with what they want that you have. Life wasn’t meant to be sleazy.

The constant resort by PPP to sensationalist narrative appears to be targetted at the more unsophisticated end of the ‘mum-and-dad’ investor spectrum, and this has long sapped their credibility. More credible erstwhile associates, such as Philip J. Anderson, have demonstrably eased themselves away from the relationship. The business model is quite flawed.