It's not just Kerri-Anne. The Australian media has had an overtly hostile response to the climate activists.

Extinction Rebellion, the raucous climate activist group holding rallies and civil disruptions across Australia, has made a lot of people mad for mildly inconveniencing motorists this month.

Nothing sums up that anger better than Studio 10 host Kerri-Anne Kennerley’s bizarre screed Wednesday morning, where she appeared to advocate running over protesters with cars. “Use them as a speedbump,” Kennerley said. “Put them in jail, forget to feed them!” Channel 10 later released a statement claiming Kennerley’s comments were “clearly a joke”.

Still, much coverage of Extinction Rebellion has been similarly shrill, and overwhelmingly framed in a negative light. In Queensland, where the protests have been particularly robust — people chained to roads, a man hanging off Brisbane’s Story Bridge — the response has been extreme. The Palaszczuk government has fast-tracked new anti-protest laws straight out of the Joh Bjelke-Petersen era, and The Courier-Mail — which has been a major cheerleader for those laws — has devoted two front pages to attacking the group in the last four days (in between stories about Queensland’s heat wave).

The paper also provided full names and personal information about protesters who “bring misery to the lives of Brisbane commuters”.

On Monday, the Rebellion hit the streets of Sydney, and The Daily Telegraph sent a reporter “undercover” in a bee costume to infiltrate the group, a “sting” operation that also landed on the front page. Amid making several cringey bee puns (which will not be repeated in these pages), the Tele’s brave correspondent wrote that the protest felt “more like a bush doof or a Year 9 drama class”.

On Wednesday, The Australian’s Jack the Insider (whose name is not actually Jack) opined that the group was losing hearts and minds because hippies are smelly.

Other coverage swapped hostility for confused trolling. With protesters set to march on The West Australian’s offices in Perth over the paper’s alleged indifference to climate change, the paper bizarrely made its front page blank, to be used as placards. 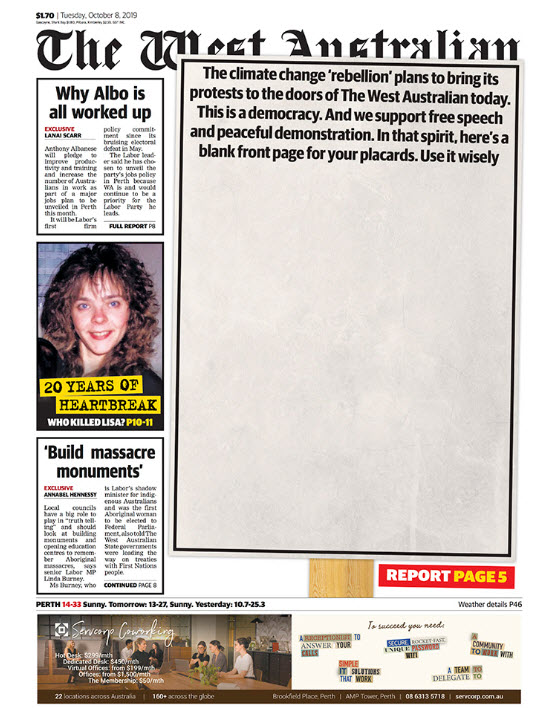 Elsewhere, coverage was slightly more nuanced. Both the Ninefax papers and The Guardian reported on how protesters were hit with highly restrictive bail conditions normally reserved for bikie gangs. The ABC even ran an opinion piece from a protester apologetically explaining why she would be disrupting people’s commutes.

What do you think of the media’s hostile response to Extinction Rebellion? Send your comments to [email protected]. Please include your full name for publication.

Before joining Crikey in 2018, Kishor was an editor of the University of Sydney’s student paper Honi Soit, an intern at The Sydney Morning Herald on the state news beat, a casual legal reporter for Justinian and the Gazette of Law and Journalism, and a research assistant at the Australian Human Rights Commission. In his spare time, he is completing a law degree at the University of Sydney. Kishor will be covering issues with respect to immigration, race and religion.

28 thoughts on “Extinction Rebellion has media frothing at the mouth”