Who’s writing ‘the climate change story’ at the Oz?

A curious ad under the heading “The Climate Change Story” ran in The Australian and the Herald Sun yesterday. Packed with dramatic tables and charts of dubious providence, it complains of the billions spent on renewable energy in Australia and concludes “the serious economic and social impact of current energy policy requires urgent remedial action to prevent a future energy crisis”. The ad is attributed to the The Climate Study Group. 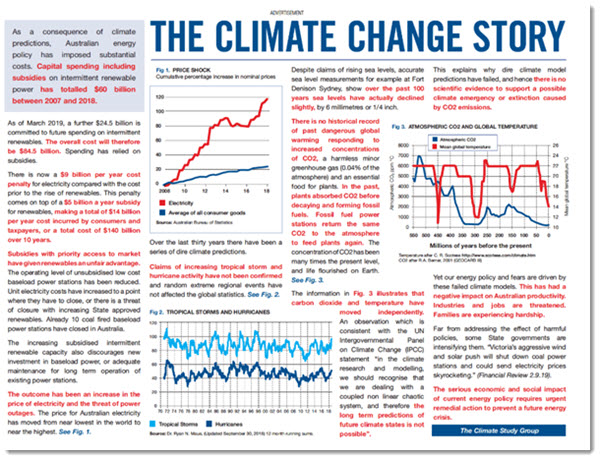 The group is led by two former directors of the Institute of Public Affairs (IPA), Tom Quirk and Bob Officer. Quirk was also director of the Australian Environment Foundation, which you may remember as the IPA-founded think tank previously helmed by Don Burke, and featuring climate skeptics such as Peter Ridd and Alan Moran.

This is far from the first time the Climate Study Group has bubbled to the surface. It’s been putting ads featuring the same combination of climate change skepticism and “newsletter-you-made-with-Windows-1998” production values in the Oz for years. It caused a particular stir in 2017 with an extremely clever ad, “proving” CO2 is not the problem climate activists say it is, using “logic” and fictional conversation between (get this) Socrates and “Mr Smith”, a hypothetical “strong believer in climate change”. Sample dialogue:

“Mr Smith: I find the implication of your questions provocative and disturbing. You should know there is a move to bring charges against you for corrupting youth with your philosophical questions.

“Socrates: I am well aware that people are disturbed by my philosophical enquiries which reveal the truth with compelling logic and facts which refute long held beliefs. Our conversation has been no exception.

The group came to Crikey’s attention back in 2015 when it sent a bizarre study entitled “Psychology, Behavioural Economists and Climate Change” to the Office of Prime Minister and Cabinet in an attempt to influence Australia’s position leading up to the Paris climate talks. The paper, which earned a stinging rebuke from the Australian Psychological Society, relied on the work of Dr William Sargant, a discredited fanatic who practised psychosurgery, electroconvulsive therapy, insulin shock and deep sleep treatment on patients in 1960s London. Sargant’s foremost Australian disciple was charged with manslaughter after using Sargant’s techniques.

Point is, the latest ad could be worse. Sure, the science is questionable, but at least it’s not based on a made-up conversation or the endorsement of a horror movie villain.

“Packed with dramatic tables and charts of dubious providence…” Dubious maybe, but not divine I assume.

No one reads that rag anyway.

Unfortunately still too many people. This morning I had a conversation with someone who I regard as pretty sensible and well informed and not a raving right winger and she regurgitated this twaddle as if it was fact. We had to agree to disagree.

By some miracle The Oz has maintained its reputation as a quality newspaper in the minds of a goodly chunk of its readers. This is despite the bent of the publication changing markedly since inception in the 1960s.

Many readers were akin to slowly boiling frogs, unaware of what was happening &, decades later, continue under the delusion the paper has gravitas & reports facts.

I bought the first edition for 6d. I wouldn’t pay half of that for it now.

Aha! I’m on to you Crikey mob now!

You keep on running pieces like this about The Oz so all we mug punter subscribers think to ourselves, “Thank God I have Crikey and don’t have to read that Oz rubbish to stay informed. I must remember to renew my Crikey subscription this year.”

Best decision I ever made 🙂

The science is questionable only to the degree of risk : will the consequences be mild, severe or catastrophic. Murdoch Snr is too old but Murdoch Jnr should expect repercussions.