Why the world loves watching animals

A Melbourne nest of peregrine falcons is the focus of one of Australia's most wholesome fandoms. How and why did we become so obsessed?

Peregrine falcons have been nesting in a box high on the roof of 367 Collins Street Melbourne since the early 1990s. For most of that time, a crude closed circuit video has broadcast their comings and goings to a monitor in the foyer. In 2017, the management replaced the old equipment with a modern webcam — and thus gave rise to one of the country’s most wholesome fandoms.

This year, the falcons screen via Facebook live, which, perhaps unexpectedly, adds a new pleasure: you can now witness the birds, as well as the unadulterated joy they bring to their many viewers.

“It is absolutely the best thing,” writes someone.

“I could just watch them all day,” says someone else.

With the great extinction grinding on, birds as a whole fare about as well — or, if you prefer, about as poorly — as you might expect.

A recent North American study reported a 29% decline in populations across the US and Canada over the last 50 years — a disappearance of something like 3 billion birds. Across the Atlantic, the European Bird Census Council says that populations of farmland birds in 28 different countries have fallen 55% in three decades.

Amidst so much death, there’s something genuinely touching about the concern shown by falcon watchers about every possible threat menacing the Collins Street nest.

“Is it a night vision camera or is there a light shining on them?” asks Angela, while watching the female peregrine of an evening. “She looks annoyed!”

Indeed she is. Most of the time, the camera records her (or her much smaller mate) sitting serenely on three little fluff balls — and then, every so often, one of the birds appears with a recently deceased pigeon, which then gets ripped apart in grisly fashion. 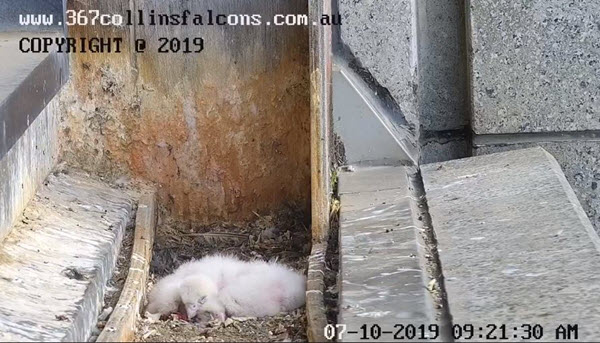 You can find these kind of animal cams all over the internet. Animal Planet L!VE, for instance, offers a veritable Noah’s ark of streaming talent, from “leafcutter ant cam” to “black eagle cam“, “puffin cam” and “sea turtle cam“.

When I tuned in, the polar bear feed had gone temporarily extinct but I did catch some walruses putting on a spectacular show of grunting and snorting. Jelly cam was undeniably trippy and the stream broadcasting from underwater on an Australian reef presented a relaxing combination of tropical fish and seaweed.

Still, I found myself coming back to the peregrines.

Why look at animals? John Berger poses the question in his famous essay lamenting the decline of our intimate contact with the wild. Today, we view animals mostly from a position of control, as in the spectacular but staged shots of nature photography — or, in particular, a zoo or nature reserve. But, for Berger, we can’t truly “see” an animal under such circumstances because its extraction from nature changes it totally, replacing its wildness with a dependence on the humans around it.

“Everywhere animals disappear,” he says. “In zoos they constitute the living monument to their own disappearance.”

Unlike many of the Animal Planet streets, the Collins Street falcons don’t live in zoo. But they don’t inhabit a forest, either — and, in many ways, it’s their reappropriation of the modern city that makes them so compelling.

Modernity, says Berger, means the reduction of the animal, as part of the same process by which humans have been “reduced to isolated productive and consuming units”.

Surely that’s why so many of us cubicle drones obsess over the falcons: revelling in the incongruity of their wildness in in a street synonymous with Melbourne finance.

“They are so stunning.” That, and similar sentiments, appear again and again on the livestream.

For Berger, such moments of aesthetic pleasure represent hope, even in the midst of deep alienation from the natural world. “That we find a crystal or a poppy beautiful,” he says, “means that we are less alone, that we are more deeply inserted into existence than the course of a single life would lead us to believe.”

There’s something of that in a city falcon.

Nominative determinism at play here Jeff? You must be relieved that sparrows are a mite small to figure on the Peregrine radar. Starlings however do feature on the menu.

Animals like to watch animals ..It’s an aesthetics of eat and be eaten fight or flight drive (sex/death/food and all that stuff ).Homo Sapien domesticus gets some of the best views in the house ..

Modern humans have spent 300 000 odd years depending on the natural world in an up close and personal way. The last few hundred of our modern destructivism has not washed that away yet.

It is entirely plausible that homo sapiens will be a part of the current sixth extinction. Providing that not all plants and insects become extinct, then the birds will have the planet to themselves without having to contend with homo sapiens mowing them down in cars. It is likely that most of the higher mammals will join us in extinction.

I live in a the country on a block. When we got here twenty one years ago there were very few birds. We planted hundreds of indigenous trees and now we have over fifty bird species either permanent residents or like the satin bower birds, seasonal. There are a few like the butcher-bird and gang-gang cockatoos that visit very rarely.

I love the birds. The smart ones like the corvids, (magpies, crows) currawongs and parrots get to know you. The magpies nest in the gums around the place, but we never get swooped when they are reproducing as they see us as a harmless part of the environment.