How the treasurer could save Christmas

'Australia’s Christmas bonus' has a nice ring to it. Will Josh Frydenberg save Christmas with a fiscal miracle?

Australia’s economy has a grim outlook. Growth is terrifyingly low, matched only by consumer confidence, and the prospect of a dire Christmas period is looming over the nation’s retailers.

Last year, December retail spending was a nasty surprise, coming in at -0.5%, seasonally adjusted. If that happens again, it will drag all our economic problems into the new year: lower earnings, lower employment, weaker confidence, etc.

Christmas spending matters, as the next chart shows. In an average month, Aussies might spend $26 billion. In December we ramp that up by about a third, and spend $35 billion. October and November are usually dragged up by yuletide cheer too. 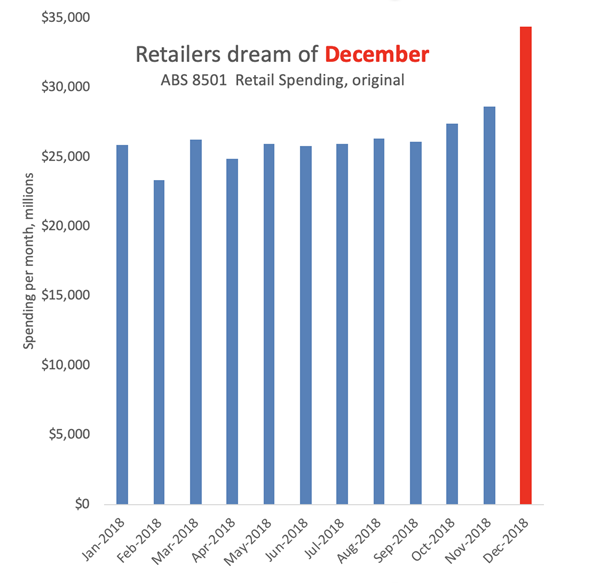 Let’s not forget the importance of retail spending. For all the talk of infrastructure, of mining exports, and of construction, household consumption remains the biggest part of our economy.

This is the key to our whole puzzle: our economy is weak because our household consumption is weak, which is because our wages growth is weak. But the latter two points feed into one another. Weak consumption is, in part, to blame for weak wages growth. That’s why we could really use a Christmas miracle.

The man to deliver this gift is Treasurer Josh Frydenberg. Frydenberg controls the mid-year economic and fiscal outlook — a tool of very elastic power. Most years the MYEFO is little more than a summary of the bottom line, released in the days before Christmas when not too many people are paying attention. But it has the capacity to expand and become a mini-budget of sorts.

There is a decent case for a mini-budget. For one thing, the budget forecasts have been blown out of the water. Household consumption was forecast to grow at 2.75% over this financial year. The RBA now has that at 2.1%. Wages were forecast at 2.75% this year, the RBA now expects wages growth at 2.3%. And the course of monetary policy has changed dramatically. We have had three cuts to record levels.

In May, the RBA was hoping for wages growth. Announcing that interest rates would stay on hold at 1.5%, RBA Governor Philip Lowe said: “Some pick-up in growth in household disposable income is expected and this should support consumption”.

But by October, the tide of enthusiasm had well and truly ebbed. Announcing for the third time in five months an interest rate cut to lows hitherto unseen, Lowe’s tone was as muted as the wages growth he had expected.

“Wages growth remains subdued and there is little upward pressure at present,” he conceded.

The RBA has even said it is thinking about how it would apply quantitative easing in the case that is required. The monetary policy ship is clearly at all hands on deck! But glance across to the fiscal policy ship and, despite the growing storm, they are still snoozing in their cabins.

MYEFO presents an excellent opportunity to rouse the crew, set sails and right the course. Frydenberg can do something to save Christmas. A very smart thing to do would be to provide some sort of immediate fiscal stimulus to households.

If we want this to happen — and we should — we need to find ways for it to be politically viable. It can’t go out under the banner of “Economy doomed, Treasurer flip-flops to adopting Rudd tactics”.

Surely Frydenberg can find ways to spin it that don’t sound so much like the Keynesianism his party’s barrackers despise. When Thatcher reduced military spending after the Cold War, she called it a “peace dividend”. Maybe Frydenberg can call this “the surplus dividend”.

Obviously, once it’s delivered back to households it no longer counts toward the surplus, but that is by-the-by. In fact, it is likely revenues have been quite strong in recent months, so Frydenberg may be able to deliver a fiscal stimulus to households and also run a narrow surplus.

He can call it whatever he wants. “Australia’s Christmas bonus” has a nice simple ring to it. I can see the cartoonists drawing a red suit and a white beard on their caricatures of the treasurer already. The great thing about a Christmas bonus is that it tends to get spent, and spending is just what our economy needs.

Should Frydenberg try and spin a Christmas miracle? Send your thoughts to [email protected]. Please include your full name for publication.

When it comes to pandemic spending, Australia’s got the goods

In order to mitigate climate change, we need to reduce the impact of our material consumption on the environment: we need to shrink our economy, not grow it. This is a necessity for our continued survival. In the absence of a national strategy to deal with climate change, which would presumably include strategies to limit the negative social impacts of this de-growth, all we can do as individuals is limit our overall consumption as much as possible. We need to withdraw from the capitalist system wherever we can. There is considerable irony in the fact that the political party that denies the existence of a climate threat is inadvertently making a significant contribution to dealing with it through the implementation of one of their other draconian core tenets: the disempowerment of workers and workers’ rights to the benefit of the owners of capital. And, as a result, crushing the purchasing power that many of these same capitalists are dependent upon for their fortune.

The capitalist hijacking of culture – in this case, one of the key celebratory periods of our society – in order to further its own ends is something we must all learn to reject. How much of the billions of dollars of additional consumption that occurs through October to December represents satisfaction of actual human needs, versus surrender to social expectations that have been carefully encouraged by capitalist manipulation for decades? I’m not saying we should cancel Christmas. It’s a great time of year, even if you’re not of the religious persuasion that originally gave rise to the festival, but there are ways of celebrating it that don’t depend on ostentatious consumption of the planet’s resources. If you really want to give your kids a present for Christmas, give them a planet with a future. That’s of much greater value than a new video games machine or new plastic toy that, like as not, will end up in the back of the cupboard or in landfill within a few weeks.

Rejecting capitalism is something all we quiet Australians can do. We can do it quietly, without having to ask permission of those who seek to control and exploit us. At the same time, we can give a good slap in the face to those who so richly deserve it.

The trickle up effect, by not trickling at all. Starve the capitalists out.

Of course a Christmas bonus to lower income and midde income Australians is the answer.Rudd and Swan did it in 2009 and it saved Australia from the GFC, making Australia one of the few countries to survive more or less intact.Anyone on $200, 000 or more should be excluded as they have had their Christmas present already.

And here’s me thinking that the Ozzie Battler has already collected their $1080 tax refund and blown it on a wide screen TV from HNorman or used it to book a cruise. In truth I suspect more money has been spent advertising it than has been paid out. The sad fact is that boosting retail consumption since the adoption of globalisation and neoliberal policies is more a boost for employment in Asia where the consumer goods are made. The margins and employment in Oz are those of the Importer, distributor and retailer. Very often those three functions are vertically integrated to allow profits to be taken where they are most tax efficient. Tough one for Joshie as the previous policy outcomes land in his lap and Dr Lowe has prematurely fired his artillery. The only certainty is that neither of them will be financially affected personally, that’s the mark of the neoliberal economy that its failures are as unequally distributed as its rewards.

Alas, frydebrain now cannot do a Rudd and swan and save us from scomos recession because they bagged that stimulus to the high heavens and would be admitting their own stupidity if they copied Rudd and Swannie now, just lifting newstart by $75 would nearly be enought to lift the economy and kick start consumer demand but dont hold your breath waiting for this mob of fiscal illiterates do do anything remotely economically responsible.

For all the bombastic nonsense we hear from ‘experts’ about the economy, at least this article points out that Australia’s economic growth is fundamentally dependent on us all buying more shit we don’t need. That, as Graeski points out above, is just another reason the Muppets do not have the ticker to do we we need to do about the obvious environmental catastrophe we are busily creating. We must have ‘economic growth’ even if that is what is destroying the planet.

The best Xmas prezzie this mob could give us is to loose their majority in Govt. and get out.

Dunno Jason. Giving Joshie marketing advice on how to manipulate the punters for a feel good sugar hit. A bit like having your toenails cut when what’s needed is amputation of the leg.