A BP employee will appeal the Fair Work Commission’s ruling that it was fair to sack him over a popular online Hitler meme. The case is the latest in a line of examples of social media blurring the lines between work and recreation.

There are a handful of events that have forever changed the face of employment relations in this country. The Eureka Stockade. The Stonemasons strike. The Accord. The waterfront. And now, a bloke who used a decade-old meme to poke fun at his boss.

A BP employee will appeal the Fair Work Commission’s ruling that it was fair to sack him over a popular online Hitler meme, the AFR reported last night. The meme puts fake captions over a scene from the German film Downfall showing Hitler reacting to his generals’ advice that he had lost WWII. It’s been popular for more than a decade, and is called “Downfall”, “Hitler Reacts To”, or “Hitler Finds Out”.

Long-serving technician Scott Tracey wrote captions joking about management’s wage negotiations with the Australian Workers Union. “We made several changes to the Enterprise Agreement. We deleted key clauses and put in confusing wording statements here and here,” one officer tells Hitler. “Why didn’t they vote for it? Why haven’t they broken?” Hitler yells. “They see through our tricks. They can’t be bullied,” the officer responds. 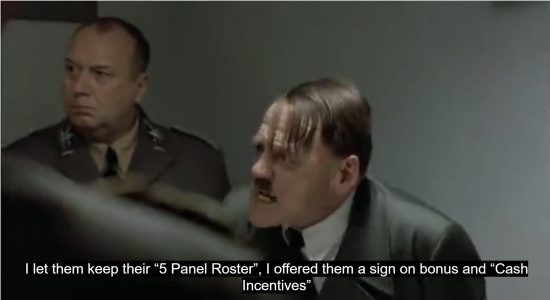 Fair Work deputy president Melanie Binet found the meme likened management to Hitler, Nazis or mass murderers, while the appeal will argue the dismissal was “incredibly harsh” for a parody meme.

Another version of the meme has emerged, this time mocking the Fair Work Commission’s decision and misunderstanding of the meme. “The meme was not funny, it was insubordination,” Hitler says. “But … it is funny though,” the officer responds. “I ordered that a reasonable person would agree with me!” Hitler yells. “If the public disagrees, they are a bunch of unreasonable morons!” Both videos have more than 3000 views.

People’s “extremely online” behaviour has blurred the lines between work and recreation, and completely disrupted traditional ideas of unfair dismissal in Australia. Early unfair dismissal cases involving posts to Facebook (a hairdresser fired for complaining about her bonus in a status update, a truckie fired for a series of racist and sexist comments on Facebook) generally held those dismissals to unfair or harsh . As social media became less of a novelty and more of a constant background hum, businesses developed more in depth and sophisticated social media policies, and employees sacked for posts had less and less recourse (Israel Folau is just the most high profile case).

Meme sharing in particular is a new area for Fair Work commissioners to deal with — in 2016 a University of Western Australia academic was sacked for sharing memes critical of the university’s vice-chancellor, but this appears to have not proceeded to the commission. So however it turns out, this will be a significant precedent. Now, we wait on the first person to be sacked for posting a subtweet or a thirst trap.

Amber previously worked for Nine News and The Age and created student comedy talk show The Struggle. She was a Young Walkley finalist, Jacoby-Walkley scholar, and won an Ossie Our Watch award. Amber holds a Masters in International Relations and Journalism and is fluent in Spanish.

Been very happily uninformed about what a ‘meme’ is for presumably 10 years now. Thanks for this demo. The two Hitler vids are very very funny. Lucky the tools at FWA weren’t around when Bob Hawke gave his famous “Bosses are bums” line after the 80’s Americas cup win.

This is on top of the recent frightening decision on the former Immigration employee.
And now that more people are taking work home, acessing the employer’s network or using employer provided IT equipment the old boundaries are breaking down indeed.

At some point very soon we’re going to reach a parity point with totalitarian China.