Underskilled, understaffed and gagged: how hospitals rort the nursing system

Hospitals are exploiting a glaring loophole in the rostering system in states across Australia, and exhausted nurses are paying the price.

A glaring loophole in the nurse-patient staffing model in states across Australia has allowed a number of hospitals to employ cheaper, underqualified nurses and pocket the proceeds, with some nurses warned to keep the issues under the radar and off the official incident management record.

New South Wales, Australian Capital Territory and Western Australia use a Nursing Hours per Patient Day (NHPPD) staffing model instead of a direct nurse-to-patient ratio, as used in Victoria and Queensland. (South Australia, Tasmania and the Northern Territory also use variations of the NHPPD staffing model, but haven’t reported similar issues.)

The NHPPD allocates each patient a number of hours of a nurse’s time — usually between six and eight — per 24 hours of a patient’s stay. But it doesn’t define a nurse’s skillset, meaning wards are left understaffed and underskilled when hospitals go cheap.

The legislation doesn’t specify nurse qualifications, says Christine Duffield, a former clinical nurse and professor at the University of Technology Sydney. “It doesn’t mandate the staff must be registered nurses,” she told INQ.

But even if registered and enrolled nurses are officially rostered, when they take leave — be it sick, annual or even maternity — there has been a growing trend to use an assistant nurse in their place. One investigation found nearly 7000 nursing care hours were missing across seven months in 2017 at the John Hunter Hospital in NSW.

Assistant nurses can be as young as 16. They need a Certificate III in Health Services Assistance — a qualification which can be finished online in under six months. They can only complete basic tasks in care and must be supervised. Unsurprisingly, assistant nurses are significantly cheaper than registered or enrolled nurses. 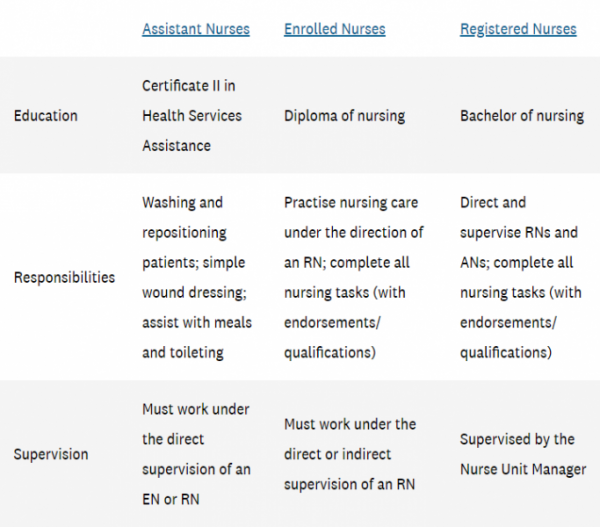 It’s sparked rallies at hospitals across WA and NSW, with nurses demanding a like-for-like replacement model, while the ACT union branch has lobbied politicians for a mandated minimum nurse/midwife-to-patient-ratios framework.

When nurses want to report issues in NSW, they can either raise it with their manager or log it in the Incident Information Management System (IIMS). Biannual reports are then sent to the Ministry of Health for review, before being made publicly available on the Clinical Excellence Commission website (though no reports have been uploaded since 2017).

But staff at Concord Hospital in Sydney say they’ve been issued a directive from executives ordering them not to log staffing and unsafe working environment issues in the system. “The executive issued a directive saying not to log them in IIMS because it’ll be archived and told it would not go further,” one nurse unit manager told INQ.

The echoing failure of public-private hospitals

NSW Nursing and Midwifery Association assistant general secretary Judith Kiejda says the issue isn’t localised. “The IIMS system can be rorted … Our members can put in that there was unsafe staffing, by either numbers or skills, but management can change that. There’s no way our members can print their reports off.”

NSW Health denied there had been directives for staff not to use IIMS for “perceived understaffing issues”. They added staffing was the responsibility of the local health district. “When an unplanned absence occurs it is not always possible to replace that shift with a nurse of the same category,” a spokesperson said. NSW Health declined to provide the number and qualifications of nurses hired per local health district.

Nurses working on the ground paint a bleak picture. One nurse, who asked to remain anonymous, says she felt no progress was being made. “There’s a feeling of futility. What’s the point of logging [understaffing] if there’s not going to be action?” she asked. “I’ve made silly mistakes purely based on exhaustion and tiredness and I’ve seen other nurses do the same.”

“I’ve found myself taking sick leave because I’m so exhausted I don’t feel like I could look after patients safely … But if I complain, I feel like it could affect my career. I stress about calling in sick, I stress about losing my job. My biggest stress is about harming a patient.”

Do you have information about this story that you’d like to share? Get in touch confidentially here.

Amber previously worked for Nine News and The Age and created student comedy talk show The Struggle. She was a Young Walkley finalist, Jacoby-Walkley scholar, and won an Ossie Our Watch award. Amber holds a Masters in International Relations and Journalism and is fluent in Spanish.

8 thoughts on “Underskilled, understaffed and gagged: how hospitals rort the nursing system”