You'll never guess the theme of the press gallery Midwinter Ball last night. Plus other tips of the week.

Stale, male and pale. As attendants stepped into the Great Hall of Parliament House in Canberra, they were handed leis by smiling (mostly non-white) event workers before stepping into the hall which was decked out with fake tropical green plants. The theme of the night was “Pacific Step-Up”. It seemed to be a not-so-subtle nudge from the press gallery committee to politicians failing act on the climate threat to our Pacific Islander neighbours. A well meaning, if tone-deaf start to a night of powerbroker partying.

For the first time in its history, the Midwinter Ball was on the record, following a leak of former prime minister Malcolm Turnbull’s speech in 2017. Perhaps because of this, or perhaps because politicians are not very funny, the speeches lacked anything resembling humour. Morrison joked about being pleased that all the journalists were in the same room so the government could easily access their metadata. Too soon, mate. He also said there should be a real estate reality TV show about Canberra politicians focusing on “location, location, location”… first starting off with Jerusalem.

Perhaps the only highlight of Morrison’s speech was his acknowledgment of the urban legend/alleged incident at Engadine McDonald’s in 1997. He also beat the dead horse about him being a Cronulla Sharks fan. “Go Sharkies!” guests heard time and time again. Note to future PMs: being into sport isn’t a substitute for a personality.

Despite the theme, the guests were (unsurprisingly) mostly white and well-off — very much showcasing who runs media and politics in this country. Towards the end, Daryl Braithwaite performed his hit song “The Horses” to a crowd of mostly inebriated fans. A stale end to a strange night.

Ram-say what? Regular Crikey readers know how closely we’ve been watching the Ramsay Centre for Western Civilisation. Now, the University of Sydney has written to the centre canvassing the possibility of a new funding proposal. Last year the university developed a memorandum of understanding that outlined key principles that would guide any future arrangements with the controversial centre, including the university’s academic autonomy, but the centre is yet to formally sign up. Vice-Chancellor Dr Michael Spence told staff (some of whom have been in uproar) on Wednesday that the university’s latest idea is to introduce a new major in the Western tradition that students could choose as part of its existing Bachelor or Advanced Studies program.

The quiet life and noisy legacy of a relatively unknown billionaire

“We are proposing that the majority of funding to be used for students in the form of scholarships, bursaries, study abroad opportunities and other related support costs [sic] … We envision the major would involve two core units: ‘Introduction to the Western Tradition I’ and ‘Introduction to the Western Tradition II’, which would be ‘great books’ in methodological approach.” The university says it believes 1100 students could benefit from the arrangement. Spence said the university has still not formally heard back from the Centre about the MoU, but said it remained “committed to the principles of academic autonomy that it enshrines”. The saga continues.

PVO vs PMO. Back to Canberra, we bring you the tale of woe of one Peter van Onselen. He of the fetching beard and Mark Latham feuds is hardly what one would call left-wing. But in the surroundings of his fellow commentators at The Australian, PVO’s generally relatively nuanced and consistent centre-right views might as well be the ravings of a Green-Left candidate running for student guild. Certainly that’s how the Prime Minister’s Office seems to feel. After PVO’s piece on Gladys Liu, he received a series of texts from the PM’s press secretary Andrew Carswell .

You may remember Carswell — we last saw him threatening Waleed Aly with defamation proceedings. PVO shared the texts from Carswell on Twitter. The PM’s man promises that Morrison will “never forget” the package  (referring to the Gladys Liu piece). Carswell then suggests PVO not bother accompanying the PM on his trip to the US (“It’s not like you’re going to get any access”), before, strangest of all, accusing Channel Ten of an “ideological bias” against the PM. 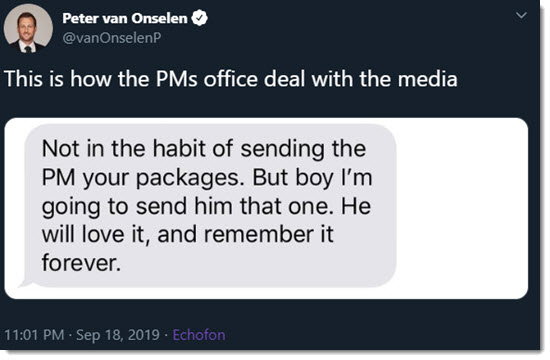 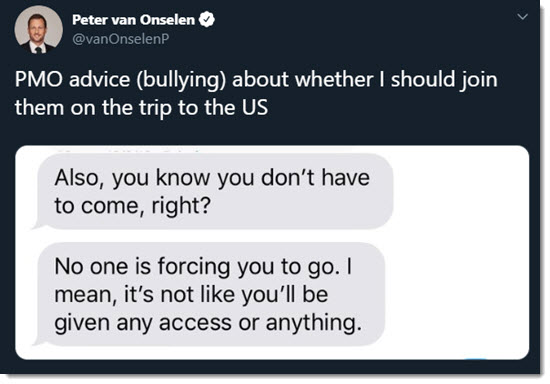 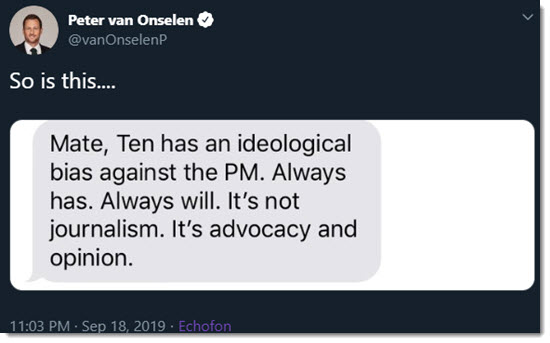 PVO subsequently tweeted his hope that Morrison’s flight to Washington has wifi, because “I need to finish my column on Scott Morrison being loose with the truth and file it while in the air”. This beef is far from squashed.

Wow I pity the PM’s office if they think Waleed Aly and co’s very centrist opinion constitute bias again the pm. They should walk a week in the shoes of a labor leader or really anyone remotely left of centre and see how they like the bias the.

“Pacific Step-Up”? Was it held in a pool?

As for POV – just because of the comparative company he keeps, doesn’t make him any more than just another “Limited News Party is better because ……” tout.
He simply isn’t as rabidly one-eyed as some other “Murdoch undies” – who is?
Last week-end on Insiders (with Savva, Costello vestal virgin and another Murdoch Muppet no less = 50% of the Insiders media navel-gazing crew) he was selling the usual “LNP better by comparison”. And “disgraceful” as Dutton’s “anchor babies” share with Hadley and his tribe was – he didn’t “want to comment on it”? ….. If that had been a Labor member sinking that low into the gutter would he have dogged it so willingly …..?

And what’s someone like “Cartman” Carswell doing in someone like our Prime Minister Morrison’s (who “takes his religion so seriously”?) office?
Why isn’t he “turning the other cheek” – seeing as how “highly” Morrison values “freedom of the press”?
……….. Makes all that other “belief” stuff sound like a snake-oil salesman’s blather?

“… being into sport isn’t a substitute for a personality.”

PVO should be grateful for the suggestion he not join Morrison’s PR press brigade to the US. It will generate an avalanche of images of two attention-seeking untalented opportunists who, due to the stupidity levels of their constituents, managed to con their way to power.

To be fair, that is most of our media, with their “Must be in awe of the Pussy-Grabber-in-Chief of the USofA” attitude?

On the subject of Gladys it now transpires that she has been offering to advocate for Visa’s for Chinese people willing to work for her recent election campaign. Now if only the little Sri Lankan family had been aware of this arrangement between Gladys and the immigration Dept.
Shonky? Yes indeed.