ABC stuck between Bankstown and the far right

ABC management is going down the road to Bankstown for a diversity 'boot camp'... just don't tell the bosses about the broadcaster's right-wing blunders.

ABC ventures to the wilds of Bankstown. The Sydney Morning Herald reported this week that the ABC’s new chairwoman Ita Buttrose and managing director David Anderson have organised an excursion to the southwestern suburb of Bankstown to better understand the average Australian. Dozens of staff will be attending the two day “boot camp”. Participants will “discuss local issues, eat at local restaurants and speak with community groups”.

Yep, Ita is venturing to Bankstown, which is an entire (*checks notes*) 30 minute drive from the ABC’s Ultimo headquarters. In the words of ABC’s head of news Gaven Morris, it’s because there were “some parts of the community that we don’t serve as well as we could be”. Head of Media Diversity Australia, 10Daily reporter and former ABC employee Antoinette Lattouf asked on Twitter if the trek out west “will it include more than just ‘woke’ photos of banh mi rolls & hijabs”.

Lattouf went on to say the vision of management was not enough: “It’s the content maker [executive producers] and day editors who need to be on board. From our research and speaking to CALD [culturally and linguistically diverse] journos across the country – middle management is often where they feel the most resistance — if not overt discrimination.”

More than 20% of Australians speak a language other than English at home, however according to ABC’s 2017-18 annual report only 9% of content makers are from a non-English speaking background. The report also states that 2.8% of its employees are Indigenous — but it does not detail how many are content makers.

ABCs of the far right. Maybe the good people of Bankstown could help Aunty deal appropriately with the far right. Q&A certainly didn’t do the diversity drive any favours last night — as a tipster pointed out to us, the show let through what appeared to be a reference to the neo-Nazi “fourteen words” slogan:

The original slogan, popular with, well, Nazis, is “We must secure the existence of our people and a future for white children”. The user has already been deleted but “has won praise” from Australian Twitter’s alt-right community, our tipster tells us.

If anybody needs a refresher on Anning, he has links to extremist far-right groups and gave a speech in the Senate calling for a “final solution” to immigration. He represented his own party, Fraser Anning’s National Conservative Party, and was famously egged earlier this year after blaming Muslim immigration for the Christchurch massacre.

The ABC’s description of his platform has since been revised from “patriotism and putting Australia first”, to the very slightly less euphemistic “nationalism and rhetoric about Australian values”.

AMMA let you finish… We have long catalogued the remarkable rhetoric of various employer groups — a heady cocktail of junk economics and intense self pity, despite everything. These groups will frequently warn that the scourge of high minimum wages or protection from unfair dismissal are just barriers to more employment. So the Australian Resources and Energy Group AMMA is to be congratulated on their candor — they don’t have a noble reason, they’d just rather not pay that much. Per the Nine papers today, a report from AMMA detailing a possible upcoming shortage of mining workers in the next five years says that government and businesses need to act to avoid a “repeat of challenges faced during the mining boom, when employers were forced to offer high salaries and generous benefits as they struggled to lure workers”.

Gladys has a crackers morning. NSW Premier Gladys Berejiklian has had a helluva morning. She has to deal with “deep rifts” in her party, having seen off the challenge of three disgruntled MPs over the party’s abortion decriminalisation bill. She can be forgiven, then, for a fairly sparse breakfast, pictured leaving her home with a fistful of crackers. But which kind? The initial designation from The Daily Telegraph said Saladas, but others weren’t so sure. The hero of the moment turned out to be AAP’s Angus Livingston, who sensed something was up: 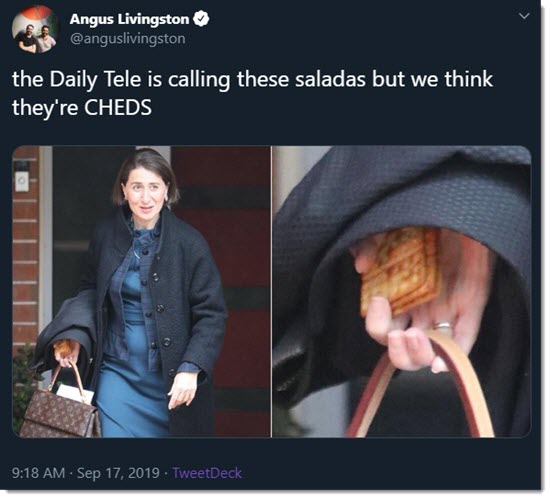 He followed up with Berejiklian’s office, naturally, who confirmed they were Cheds — a far better choice if you have to eat unadorned crackers. The Tele, to their eternal credit, updated the story. We look forward to Mark Ruffalo’s Oscar-nominated turn as Livingston when they finally make a movie about Chedgate. 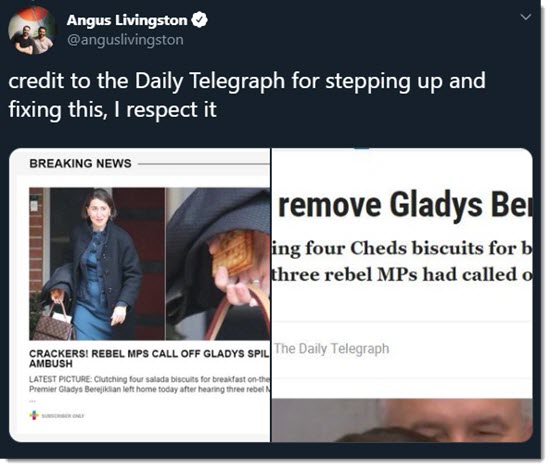 I wonder whether one of the topics to be addressed at the ABC’s Bankstown Forum for getting to know about what Australians are thinking might be:

Is Sydney Sydney-centric? Some people I’ve met from Sydney’s western suburbs have never met anyone from the eastern suburbs. I heard that a taxi driver from outside the western suburbs, when asked to go to Lakemba, said, “I wouldn’t go in there.” My experience as a Perth resident familiar with Lakemba is that it’s easier to walk and drive in than much of the rest of Sydney.

> calling for a “final solution” to immigration

As I recall John Howard used the expression “final Pacific solution” and no one seemed to object.

Good grief, now understand why I get cerebral irritation every time I bother with TD. I thought it was just the anchors.

Cerebral palsy is quite dire Vasco, I just get diarrhoea when I try to watch the dismal entourage constantly trotted out…..some nice secular progressive voices occasionally would be such a relief.

Pru Goward (one of those ex-“ABC lefties”?)

Then there’s Sue Boyce, who has been a regular, and Dai Li (Q&A next week along with Paul Fletcher and the conservative leaning Jan Fran. Li = “Fairfield City Councillor”? Why her political proclivities aren’t declared is anybody’s guess……almost, what have they got to hide?).
I’m pretty sure Coonan’s been on there with Kay Patterson.
I don’t count Hewson – he doesn’t spurt and defend the Coalition party line like the rest of them and Baird and “Feathers”.

So ABC publishes an anodyne and essentially meaningless comment, which isnt controversial, but has some stylistic echoes of a comment liked by nazis. Should they really be embarassed by this?

Gladys’ crackers may’ve been correctly identified, but the abortion decriminalisation bill is not the Liberal Party’s, it’s from independent, Alex Greenwich.