The man who once ran media for the Immigration Department says Coalition governments are increasingly imposing regimes of silence over their departments.

This is part two of INQ’s look into the world of political spinners.

Most media and communications staff in federal government agencies, particularly those in the Department of Home Affairs, have been muzzled. That’s according to Sandi Logan, the former head of the Immigration Department’s media and a former journalist, who left the public service in 2013.

Spin doctors in departments are doing little, if any, spinning, Logan told INQ. Information given to journalists, and therefore the public, is sparse compared to what it used to be.

“Increasingly, Coalition governments are seeking to impose muzzles and very short leads and sometimes impose complete regimes of silence on their departments, and specifically on their department’s media teams,” Logan says in his distinctive Canadian accent, “and we’re really in trouble.”

“What we need is strong leadership in the public service to stand up to politicians to … [allow] the need for an agency to have a voice and to communicate that voice and express it,” he said. “And we need politicians to understand they have a role to play to [give] their political message but departments and agencies also have a role to promote the message around the operations they are delivering, the services they are delivering, the putting into effect of legislation.”

Logan, who was controversial during his tenure because of his openness in engaging with the media and his propensity to hit back at critics of the department’s implementation of asylum seeker policies, made sure weekly briefings were sent out to journalists in a spreadsheet detailing the number of asylum seeker arrivals. The department also announced the arrival of asylum seeker boats, providing near-real-time transparency about the failure of the government’s maritime arrivals policy.

When Scott Morrison became the immigration minister, such transparency was mocked as “the shipping news” and there was direct instruction to stop handing out the information on an “on water basis”. If it was “on water” — meaning in relation to boat arrivals, or anything that could even remotely be connected to boat arrivals, including issues such as naval equipment — journalists would get nothing (and nor would non-government senators asking at Senate estimates).

Concomitant with the new era of “on-water” silence was the replacement of a willingness to work with the media with a determination to attack it. Mike Pezzullo, who took over the then-immigration department in 2014, attacked journalists individually and collectively. Leaks to the media that embarrassed the government were referred to the Australian Federal Police.

When Kevin Rudd returned to power as prime minister in mid-2013, he reinstituted offshore processing on Manus Island and Nauru. “I can tell you probably 70% of the department of immigration staff were horrified, including me, at the prospect that we were going back,” said Logan. “It was bad enough we had people on Christmas Island, hundreds and thousands of miles away from the mainland.

He said “to Labor’s credit” they understood why the department had to have a voice to explain to the public what it was doing. It also meant staff could see the department engaged in public, explaining its implementation of the government’s decisions.

There is always pressure having to deal with journalists — they ask questions, they have specific deadlines, and they want to beat other journalists to the story. Unlike other media managers, Logan gave his number to journalists, who could call him up to get what was needed. Much of it would stay off the record but it was necessary to provide background, so they knew the department wasn’t “bullshitting them”.

Whether that was “spinning” or not, the spinners have stopped inside the public service, replaced with brick walls designed to resist scrutiny, while ministerial media advisers get on with trying to manipulate journalists. Government MPs, with Pezzullo’s endorsement, recently floated a proposal that journalists preparing stories based on leaks deemed national security-related should be required to contact departmental media officers before publication, in order to enable them to redact things deemed too dangerous.

The government might discover that, having erected brick walls to keep the media out, those walls function just as well to keep them isolated instead. 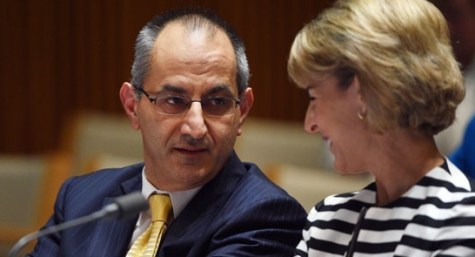 Dishonest and obsfuscating government, yeah no, that’s what we Strayans want expect and feel comfortable with.

How much more perverse can the operations of this government get? They engage in this nefarious secrecy because the majority of citizens are not listening anyway? It is an outrage that the public service (the hint of its purpose is in the name) has been so thoroughly perverted as to become a mere government service actively working against the interests of the public.

Everything the public service does is information to which the public is entitled, subject to maintaining the privacy of citizens and the requirement to keep authentically confidential information secret. However, the provisios are now the blanket policy. History should damn this LNP government for all its perversion of democracy. But that fact will, in the future be disputed by those precious about shaping their invented legacies.

I did a recorded 5 question interview for AM, about 20 years ago, on behalf of my dept. At its conclusion, the reporter said it was a good interview and both her boss and mine would be happy. Hers for her getting the talent, and mine because I didn’t say anything,

Government transparency is nice and all but relying on their good graces produced a lazy journalism arm of the political class directly embedded inside their subjects.

I’d rather the reporters just tell me what the government is doing by hook or by crook. I’d pay for that, but I won’t pay for stenographers and propagandists.

FoI could use far more teeth though, for people doing investigations. That kind of transparency is better than a chatty spin doctor.

Australia, a country subject to military censorship (on-water operations) in a civilian area of responsibility and no out cry. No protests. Just meek acceptance. The country has been cowered in a despicable fashion.