The price is right for Abbott’s gala

Guess how much it costs to get a seat next to Tony Abbott? Plus other tips of the week.

How Abbott that. Former prime minister Tony Abbott spent more or less the entirety of his unsuccessful bid to keep his seat of Warringah at the last election on lock-down, impossible to track. Trust us, we tried. Turns out frustrated journalists or constituents had an easier option to get his ear: just give a bunch of anti-abortion activists some extra money. It seems so obvious now that we say it. NSW Right to Life — a peak body for giving a massive toss about other people’s parenting choices — are holding their annual gala dinner and auction and attendees can actually sit with Tony Abbott for $30 extra. We note with some trepidation the auction portion of the evening, which we assume is just a box of B.A. Santamaria books donated by the Sydney Institute. 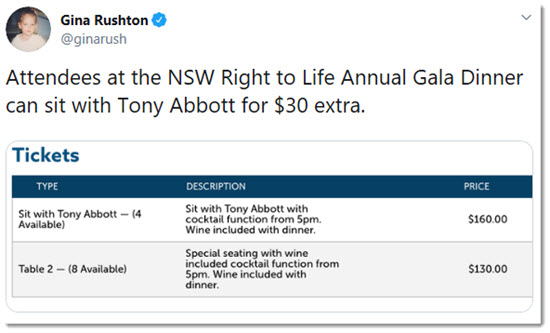 Haunted writers house. It’s been a big few days for creepy content. First there was that house listing in Adelaide that jumped from one to 100 with queasy speed, and now the Northern Territory Writers Centre are offering the 2019 Andrew McMillan Emerging Writer’s Residency, a two week writing retreat in Larrimah. The application first warns “it’s important for applicants to be aware that Larrimah is remote, and has little mobile phone or internet coverage, no shop, and only one bus a day”. All of which sounds fine, a potentially lovely break from distractions even, until you remember where you’ve heard of Larrimah before. “People should also be aware that a man who lived there went missing in December 2017, and despite an extensive police search, he has still not been found.”

Biden time. Former vice president and current candidate for the Democratic 2020 presidential nomination has not had the easy run he might have expected as a familiar face/”electability” candidate in the chaotic era of Trump. When Biden has called to mind his history, it hasn’t played that well. There is the fact that several women came forward to say Biden had touched them in ways that made them uncomfortable, which didn’t pair well with the fact that he kept saying things like “I bet you’re as bright as you are good looking” to literal children. There’s his voting record on the Iraq War and his “misspoken” revision of it. Or just that time his goddamn eye filled with blood during the debate. In all these cases, Biden called to mind his age, and the past in precisely the wrong way. But now he’s doubling down on that approach, enlisting actor Richard Schiff to appeal for donations on his behalf. Schiff —  as he reminds recipients in a not-at-all embarrassing email sent on behalf the Biden campaign — played White House communications director Toby Ziegler in centre-left 2000s politi-porn The West Wing. 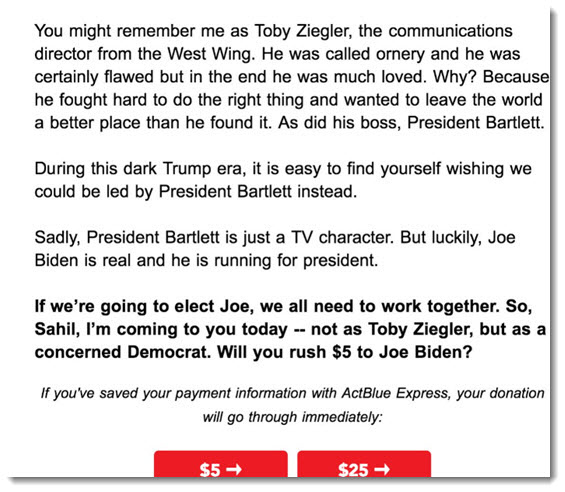 It’s worth repeating the exact text: “[Ziegler] was certainly flawed but in the end he was very much loved. Why? Because he fought hard to do the right thing and wanted to leave the world a better place than he found it. As did his boss, President Bartlett.  During this dark Trump era, it is easy to find yourself wishing we could be led by president Bartlett instead. Sadly, president Bartlett is just a TV character. But luckily, Joe Biden is real and he is running for president.”

Change you can believe in.

That is a classic gag. You may or may not have noticed, but Boris Johnson has had a bit of shocker over the last week. The last thing he needed was some esoteric shade thrown at him by Irish Prime Minister Leo Varadkar. Varadkar — who has made no secret of his opposition to Johnson’s approach to a no-deal Brexit — concluded a joint press conference with the British PM by promising Ireland would be Britain’s “Athena”.

In Greek mythology, Athena knocked Hercules out during his murderous rage, so he couldn’t harm any more people. Johnson chuckled — clearly his Eton education is good for more than just ushering him into the right rooms at the right time.

You’d think he’d be aware that there’s only one l in Bartlet.

LOL Harking back to the golden years of “The West Wing” might be all very well for Uncle Joe…
But *no one* has come even close to Valerie Plame’s latest campaign ad for Congress. 🙂
http://bit.ly/2N60gyo

A more likely allusion, rather than rendering him unconscious when doing a spot of slaughtering, is that Artemis helped Heracles with his 12 Labours.
She was no soft touch when it came to dealing with her dimwit brother Ares, constantly beating the tripe out of the braggadocious war god.
Of course it might just be Bozo thinking phwarhh of the eternal virgin.