Attendees of a Centrelink-endorsed compulsory work-skills training session have walked away with life-changing advice including "don't dwell" and "be a spin doctor".

The Centrelink Secret. It would appear that Centrelink training providers are shaking things up to help job seekers find work. In a handout compiled by the Salvation Army’s Training Plus, job seekers are encouraged to be “spin doctors”, have a “healthy life-style” and “laugh and smile” as much as they can in order to get a job. The premise being that negative people are “contagious” and that by visualising the job you want, you stand a better chance of landing the gig. So it’s basically an abridged version of Rhonda Byrnes’ runaway best-seller The Secret.

According to this Twitter user the flyer was given out as part of a Centrelink-endorsed compulsory work-skills training session.

Some of the more comforting advice for potentially disconsolate people — who are worried about putting food on the table and a roof over their heads — is that they should avoid “dwelling” on their circumstances to help them “get some perspective”. It also encourages people to exercise three to four times a week and to eat well so that their bodies can “vibrate at a high frequency”.

Crikey has been unable to confirm the scientific veracity of these presumably good “vibrations” but reached out to a few Instagram influencers for their thoughts. We did not hear back by deadline.

Eton mess. In a new low for British high society it has been revealed that students applying to the prestigious Eton College have been faced with an entrance exam question that judges their ability to get away with murder.

In a multipart exam for the King’s Scholarship in 2011, 12- and 13-year-old boys were asked to answer the following question:

The year is 2040. There have been riots in the streets of London after Britain has run out of petrol because of an oil crisis in the Middle East. Protesters have attacked public buildings. Several policemen have died. Consequently, the Government has deployed the Army to curb the protests. After two days the protests have been stopped but twenty-five protesters have been killed by the Army.

You are the Prime Minister. Write the script for a speech to be broadcast to the nation in which you explain why employing the Army against violent protesters was the only option available to you and one which was both necessary and moral.

Eton College has produced 19 prime ministers (including Boris Johnson) and educated members of the royal family, including the Duke of Cambridge and the Duke of Sussex. Eton claims that its aim is to promote the “the best habits of independent thought and learning in the pursuit of excellence”.

Real basic real estate. And finally Crikey would like to bring your attention to this real estate sign, which was spotted by a tipster in Redfern — home of Sydney’s rusted-on hipsters. It appears that agents no longer need to advertise the specific merits of a property or the suburb in order to appeal to the millennial market — you just need to hold up a mirror! 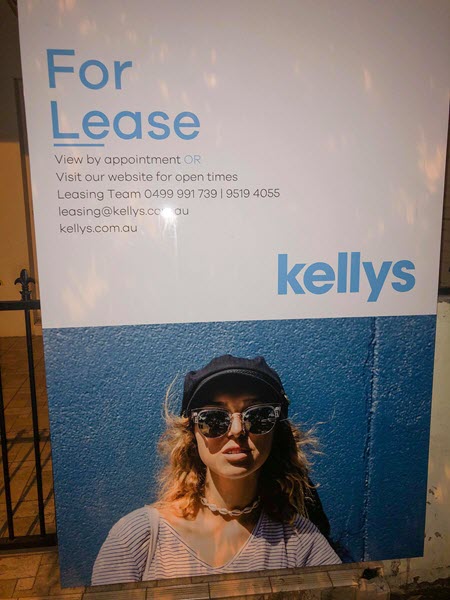 In regards to the Centrelink secret, they do not contract training providers. More likely to be under jobactive. Maybe the all knowing Instagram gurus will clarify.

The job agencies is a suitable case for the ICAC treatment – they cost the government more than the CES ever did.

So true AR. I have known a number of dunderheads and shills working for these so called employment agencies. The game is lucrative and the rorts are many. As long as the boxes are ticked the money keeps rolling in. Too bad about the job seekers.

Today, the government anounces another go at people on welfare using drugs. Genius!

On advice for jobseekers:
Welfare recipients who find such advice too punishing perhaps need to get onto invalid pension. Those who are plodding through the depressing business of jobseeking are actually getting good advice from the Salvos. Getting regular exercise, controlling your hunger, practising a positive attitude and giving out good vibes are exactly what you must achieve. Yes it is punishing. Yes it is a long plod. But you must make that journey to get out of that hole.