Australia's latest retail figures are in, and it doesn't look good. The government needs to throw one hell of a sale.

The Australian economy has had a jolt and the ripples are now flowing outwards. Consumers experiencing weak wages growth and a teetering global economy have been spending less. And, since Australian consumers constitute a majority of our economy, the effects are certainly being felt.

This week brought hard confirmation that the Australian consumer is as nervous as a mouse. Retail sales growth was expected to come in positive. Instead, as the next chart shows, it printed its third monthly fall in the last eight months (down 0.1% in July, seasonally adjusted). 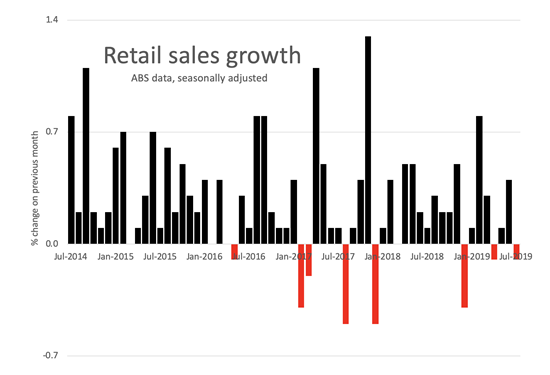 The July data confirms the observation of quiet aisles in many retailers. Big W is closing many of its outlets. The owner of David Jones this year wrote down the value of the department store chain by $437 million. According to ASIC’s insolvency statistics, 142 retail business entered administration between March and June. Many more retailers are likely to go broke in the remainder of 2019 as shoppers close their wallets.

A 0.1% fall in monthly retail trade is not the largest fall in recent times. But when we consider discretionary categories, the weakness is even more apparent. Spending on cafes and restaurants fell 1%, while recreational goods spending fell 1.6%.

The cycle of weak wages growth and weak spending is the famous paradox of thrift. It requires a circuit breaker. The Reserve Bank is hoping to provide that relief with interest rate cuts — the cuts are painful for savers but good news for borrowers, and that’s the key.

“For every dollar the household sector receives in interest income, it pays well over $2 in interest to the banks and other lenders,” RBA governor Philip Lowe told a Senate Committee last month. “This means that lower interest rates put more money into the hands of the household sector and, at some point, this extra money gets spent and this helps the overall economy.”

The RBA has cut rates to 1% and, as the next chart shows, market expectations are for two or three more cuts by this time next year. 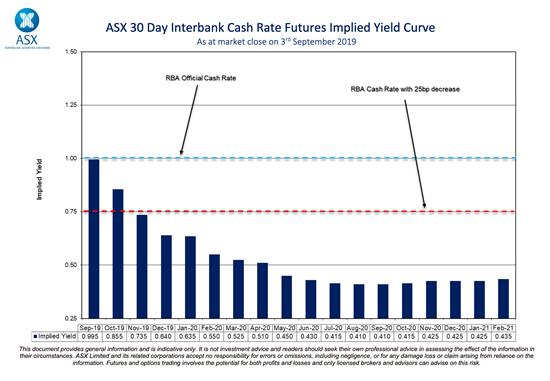 But interest rate cuts can only do so much without blowing up the housing market again.

The other circuit breaker for consumer spending is fiscal policy. If the government can get more money into our pockets, we should spend more.

The low and middle income tax offset (LMITO) tax cuts are expected to flow to retail sales. Announced in May’s budget, those tax cuts put an extra $1080 in the hands of people with a taxable income between $48,000 and $90,000.

Is July too soon to expect the LMITO to flow to retail sales? The assistant treasurer announced that a record 650,000 taxpayers had put in their tax returns in the first week of July and would get their returns promptly, so at least some Aussies have got their hands on it. August should see more of an effect — assuming households do not simply use the cash to pay down debt.

The huge question hanging over the economy is whether the LMITO is a sufficient deployment of fiscal stimulus. The RBA has repeatedly cried out for extra spending on infrastructure. Shadow Treasurer Jim Chalmers has demanded the government turn the mid-year economic and fiscal update — usually a dull affair released just prior to Christmas — into a mini-budget.

“The government must bring forward a budget update to properly outline an economic program that supports the floundering economy,” he said in a press release.

Thanks to high labour force participation and high iron ore prices the budget position is likely to be somewhat better than forecast, meaning Josh Frydenberg may be able to do more to support household spending without necessarily going deep into deficit.

One part of the solution could be lifting Newstart, recipients of which are highly likely to spend the money they receive thereby supporting the economy. That’s another example of the kind of circuit breaker we need; one that will create good ripples, to flow through the consumer economy, from shoppers to business owners, and then back again.

How do you change a whole nation’s view on spending? Send your thoughts and comments to [email protected].

Welcome to the Roaring ’20s — with a twist. We are living in a boom and a bust

I still can’t understand why the federal government doesn’t increase Newstart, besides ideology.

It should be a non-brainer. The unemployed will spend the needed extra money, providing a necessary boost to the economy. And make it easier to get a job (it takes money to get to a job interview, and to ‘shine up’ for it too).

Why does a job-seeker need less money than an old age pensioner?

It’s not just ideology, but an increasingly entrenched culture of malice and punishment, across the board. It has become an almost knee-jerk reaction to the “prosperity Christians” of the LNP.

Josh is banking on the July 2019 tax cut and the low interest rate is going to save the country from a recession. He will not do anything for the economy lest he forfeits a small surplus next year.

“The low and middle income tax offset (LMITO) tax cuts are expected to flow to retail sales. Announced in May’s budget, those tax cuts put an extra $1080 in the hands of people with a taxable income between $48,000 and $90,000.”

Perhaps if the LMITO was better targeted, with the full $1,080 going to those below the $48,000 threshold, instead of just a proportion of it, would stimulate the economy more.

You give massive tax cuts to big business and beaut little tax breaks to small and medium business and then they instantaneously and altruistically jack up their own wages and salaries and spend great swags of money on stuff they actually don’t need because it’s good for the economy. By jingoes, by crikey Jason, have you not been bloody listening?!

Regarding tax cuts, weren’t there rather massive cuts rolled out with the “carbon tax” implementations?

Which weren’t repealed when the “carbon tax” was. Even though the government has tried to take the small energy supplement off pensioners and the unemployed.