Sydney Uni has a few things to learn about Confucius Institutes…

University of Sydney vice-chancellor Michael Spence has come to the defence of Beijing-influence peddling Confucius Institutes.

From the Crikey grapevine, the latest tips and rumours.

Our two Spence on Confucius Institutes. As the vice-chancellor of a university reliant on revenue from foreign students, the University of Sydney’s Michael Spence can probably be expected to be one of the key advocates for a strong Chinese presence in our higher education institutions, and so it has proved of late: Spence has suggested critics of our dependence on foreign students and the role of Chinese funding in academia might be racist, and motivated by a desire to ensure only kids from Mosman get educated at university. But even Spence is pushing plausibility when he insists that Chinese government-funded Confucius Institutes (CI), which have proliferated across campuses worldwide, are innocuous language institutions just like “the Alliance Francaise or Goethe-Institut”.

The remarks must have had Sydney’s Francophones choking on their croissants. As anyone who has tried to improve their rusty French at Alliance Francaise can tell you, they differ from Confucius Institutes in certain key regards. One, they’re not directly controlled by France’s government, and certainly not by France’s ruling party — whereas CIs are directly controlled by Beijing. Two, Alliance Francaise is not on university campuses — and unless their goal is to monitor and intimidate Francophones at universities, they have no need to be. Third, Human Rights Watch hasn’t warned Australia that Alliance Francaise associations are “effectively outposts” of France’s education ministry, and “fundamentally incompatible with a robust commitment to academic freedom”, as it has for CIs. Fourth, a French government official hasn’t described Alliance Francaise as “an important part” of France’s “overseas propaganda set-up”. Nor has the FBI investigated Alliance Francaise. Spence needs to find a better justification for the presence of these outposts of a tyrannical government on our campuses.

Build the wall. Local council politics in Sydney attracts its fair share of characters. This week, Julie Passas, a Liberal councillor on Sydney’s Inner West Council introduced a motion proposing to “contact President Trump for his wall-building contractor (US/Mexico) to construct a wall around the Inner West”. While Passas says the motion was a “tongue in cheek” response to concerns about lack of parking in the area, it’s probably not the most effective burn given the failure of Trump’s wall policy thus far.

This latest stunt isn’t the first time Passas has courted controversy. The day that the result of the marriage equality survey was announced in 2017, Passas got in a spat with her neighbour over his flying of a rainbow flag, which she likened to an ISIS flag. Passas has recently been ordered to pay him damages of $2500 for homosexual vilification. At the time, Passas was deputy mayor after Labor cut a deal to lock out the Greens. Her career as a councillor has been marked by frequent ejections, in response to which she has threatened to call the police and, on one occasion, has taped her mouth shut.

Balloons and streemers. Big shake-ups are afoot for government media monitors, with the latest AusTender records showing that former monopoly-holder Isentia has fallen from a 99.5% share of federal contracts in 2014 to 79% thus far in 2019. This drop off — which correlates with a fairly massive dip in Isentia share price — can be traced directly to emerging rival Streem, which launched in 2017 and has since grabbed 18% of the federal market share this year — including Treasury, the ATO, ACCC, the Reserve Bank, and the Department of Prime Minister and Cabinet. That final score is perhaps unsurprising, given Streem CEO Elgar Welch is a former adviser in the prime minister’s office and claims to have built the new business based on frustrations with its competitor.

Djab Wurrung burning. The fight to save sacred Djab Wurrung trees yesterday met a blow after Traditional Owners woke to an “ancestor tree” on fire. The fight to save the trees ramped up over the weekend, with a Victoria’s Trades Hall convoy joining hundreds of protesters to defy an eviction notice. Local lore man Zellanach Djab Mara has been left feeling “gutted” over what he calls suspected arson. As Crikey found out, opposition to the tree blockade in the neighbouring town of Ararat is not hard to come by, with one woman telling pamphleteers “I would burn it if I could”. 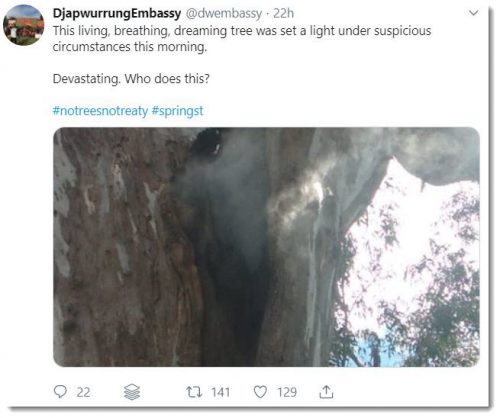 All the Nats’ men. Finally, Crikey readers have had some thoughts on yesterday’s coverage of Barnaby Joyce’s fall to power since losing the top job. This included one tipster who points out that one of Barnaby’s more iconic lines in The Australian — “You will buy cars of their prescription because of global warming. You will not eat meat because of global warming. You fell for it, sucker! Just keep handing over your sovereignty…” — bares a passing resemblance to a monologue from the 1949 film All the King’s Men:

Now listen to me, ya hicks. Yeah, you’re hicks too, and they fooled you a thousand times just like they fooled me. But this time, I’m gonna fool somebody. I’m gonna stay in this race. I’m on my own and I’m out for blood.

Barnaby, have you seen All The King’s Men? It didn’t work out so well for the central character, Willie Stark.

I once considered University’s to be the place of higher learning and sound robust debate of any subject. How ever since the Chinese Beijing Communist Government took over the control of our University’s by stealth, using the fee’s of student numbers as a leaver, the quality of Higher Education has collapsed. Even those who once were willing to debate a subject and a theory, have changed track and now work for the Dollar with the loss of their integrity.