The former deputy PM has only leaned into his loose-unit image since being demoted to the backbench — and it's winning him votes.

Barnaby Joyce, as of last week, is threatening to leave the Coalition.

The former deputy prime minister has had a whirlwind two years. He’s come through a citizenship saga, a highly publicised affair and pregnancy, a related “government job” scandal, still unresolved sexual harassment allegations and an eventual resignation from Nationals leadership. Despite it all, Joyce managed to retake New England in May with a thumping primary vote of 54.8% — a 2.5% swing — in May. 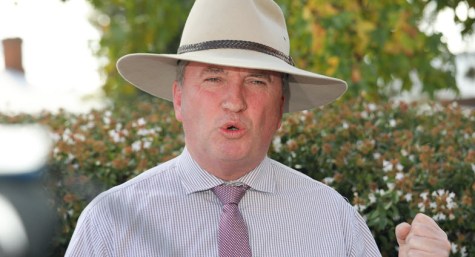 So what has happened? Is there a method to Joyce’s madness since abandoning any pretext of toeing the party line? Crikey examines how, in a world that celebrates Donald Trump, Boris Johnson and Pauline Hanson, Joyce has only failed upwards since being knocked off his perch.

Ever since the Nationals reluctantly dumped Joyce from the leadership in favour of the gaffe-prone Michael McCormack, talk of a return was on the cards. From his place on the backbench Joyce continued to speak out against Coalition leadership. Last year he criticised then-prime minister Malcolm Turnbull for his “bonk ban”, attacks he continued when Turnbull chose to leave parliament.

Then the hankering for his old job began. Earlier this year, amid widespread fears the Nats were set for electoral oblivion, chatter around Joyce’s return ratcheted up, with the backbencher announcing his candidacy in a leadership spill that never came. There were similar threats over a potential end to the Liberal-National Coalition after Jim Molan launched his own renegade tilt for a Senate spot.

Then, somehow, the Coalition won, leaving McCormack safe in his job for now. That hasn’t stopped Joyce from threatening to leave the party after a spat with the NSW Nationals over their support for the state’s abortion bill. On Friday, Coalition colleagues desperately tried to hose down those threats.

Joyce has never been a huge fan of the environmentalism or the people whose entire jobs are to study and understand it, but he has survived a truly whopping number of anti-environment scandals. The former Water Minister survived admitting that he took water back to agriculture through the Murray Darling Basin plan so the “greenies were not running the show”. He’s also been seemingly unhurt by the rash of Murray Darling fish kills earlier this year.

A love for coal has also seen Joyce threaten the Nationals leadership and Coalition unity. This in turn forced Morrison to slap down, and then extend a $10 million olive branch in the form of a feasibility study into the prospect of a new coal-fired power station in Queensland.

Last month Joyce appeared to break with the rest of his party and the Coalition by calling for an increase in Newstart.

But he got there in typical fashion — with a second family and a salary halved to a measly $211,000 since his backbench demotion, Joyce claimed he was now struggling financially and could suddenly empathise with those trying to live on Australia’s desperately low Newstart allowance.

Perhaps the most notable change in Barnaby’s demeanour is his increasingly erratic media presence. This has included some extremely personal, occasionally baffling tweets — Crikey chronicled the best of them in July, but a sledge against Rob Oakeshott is an easy standout — along with one very long, defensive pre-election interview about “Watergate” with Patricia Karvelas.

Joyce writes almost fortnightly for The Australian, including one particular take that, written in the midst of a poll-driven fever dream early January, has to be reread:

You have already fallen for it.

You stood by and let farmers be dispossessed of their vegetation rights because of global warming.

You must buy power only from the prescribed source because of global warming.

You will buy cars of their prescription because of global warming.

You will not eat meat because of global warming.

You fell for it, sucker! Just keep handing over your sovereignty.

Hasn’t Joyce always been like this you ask? Absolutely, but unleashing it against colleagues, political enemies and even the general populace has had little negative impact on his political fortunes.

Time and time again, we’re told voters respond to Joyce largely because “he’s a maverick” — something he has only leaned into since his leadership career derailed. Condemning him to a quiet spot on the crossbench (while possibly just another bluff from the government) would do nothing to quash him.

Should Barnaby Joyce move to the crossbench? Write to boss@crikey.com.au and let us know. 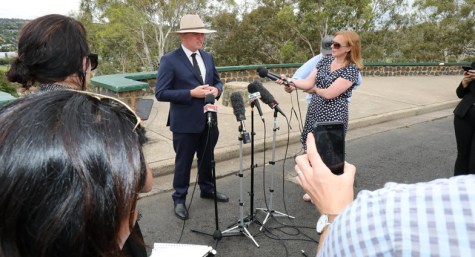 Joyce quits — and doubles the backbench trouble for Turnbull 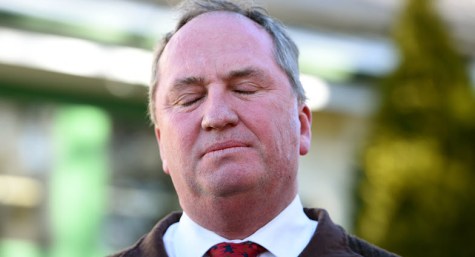 Should Barnaby make good his threat to move to the crossbench?
He has abandoned every principle he ever claimed to stand for. (Reluctant Kiwi. Family man. Barnaby Rubble. Uncertain paternity. Leader of the Nationals. etc etc) But moving to the crossbench is not far enough.
“Australia’s best retail politician”? Because the price is over-inflated?
I wish Crikey would stop writing that Barnaby may have a future. He and his phony hat do not belong in Australia’s leadership.

Beetrooter should move to another country, not just to the cross benches. It is staggering how fascinated voters have become with obvious idiots, not even loveable idiots.

Astonishing.
Is there a female left who would actually vote for him?
Barnaby it is your turn to simply be quiet now – and listen.

Joyce should move to the cross bench. In fact he should resign from the Nats and set up his own party. The third of the New England electorate who either didn’t bother to vote or didn’t vote for him might then wake up if they haven’t already died from lack of water (the drought is calamitous) and demand that this self serving drop kick start looking after all of his constituents and the poor benighted country they inhabit.

Maverick my arse. HE won’t even stay for the second half when his Armidale footy team is behind. Talks big, backs down. Cola on the Liverpool Plains oh dear irrigation water…backdown Barnaby again. DArling of the right wing media, Murdoch flunky and general F’wit.