Good morning, early birds. Victoria moves to abolish its contentious public drunkenness laws two years after the death in custody of Yorta Yorta woman Tanya Day, and a new report finds the majority of refugees on Manus and Nauru are seriously ill. It's the news you need to know, with Rachel Withers.

Victoria is set to decriminalise public drunkenness, two years after Yorta Yorta woman Tanya Day died from injuries sustained in custody after being arrested under the law, and days before a coronial inquest into her death begins.

The government has told the ABC that the existing laws will be replaced with a new health-based response to public drunkenness, with state Attorney-General Jill Hennessy saying the reform will be implemented in the coming months. Victoria and Queensland are the only states that still criminalise public drunkenness, something a 1999 royal commission found disproportionately affects Indigenous people, Nine papers report. Day’s family, who have been fighting for the reform, have welcomed “a great first step”, pointing out that “it took the death of our mother for the government to repeal laws that should have been abolished 30 years ago”, The Guardian reports.

Three quarters of refugees on Manus and Nauru are seriously ill, according to analysis conducted by volunteer doctors in a submission to a parliamentary inquiry, The Age reports.

An audit of 338 refugee medical files reveal that the average offshore patient seeking a medical transfer has 4.6 serious physical ailments, with statistical analysis predicting that at least 96% of the 581 asylum seekers who have applied for transfer suffer from one. The prevalence of kidney stones was particularly high, more than 20 times that in Australia, with a “terrible” diet and “poor access to drinking water” leading to chronic dehydration. The submission contradicts an Independent Health Assessment Panel report, which claimed there was “no unusual pattern of disease or disability” among refugees living on Nauru and PNG.

The government will target India for coal exports and stand with Vietnam in the Indo-Pacific ($) amid a deteriorating relationship with China.

Resources Minister Matthew Canavan will fly to Kolkata on Monday, pushing billions of dollars in thermal coal for the country’s booming electricity market, The Age/Sydney Morning Herald report. It comes as fears of a US-China trade war mount, with Canavan arguing “we need to make every effort to diversify our markets so we are less exposed to disruption”. Prime Minister Scott Morrison, meanwhile, has committed to increased co-­operation with Hanoi in the South China Sea, amid a month-long standoff with a Chinese vessel in Vietnam’s exclusive economic zone, The Australian reports.

I am not going to deal with another whisper campaign. Come out and say in public that you want me out. I believe I am entitled to that.

The former deputy prime minister threatens switch to the crossbench, amid rumours NSW state colleagues want him expelled from the party over his involvement in the abortion debate.

Macquarie could ‘survive the loss’ of Alan Jones: Nine CEO

‘Out in the cold’: Council shuts down scheme to help homeless sleep in churches

Huawei to slash Australian workforce in half due to 5G ban

Mascot Towers residents told they will not return home this year

Unis relying on overseas students to ‘balance the books’ after funding cuts: vice-chancellor

CFMEU leader calls on Jackie Trad to stand down ($)

“Put aside anyone’s personal reverence for Pell the cardinal, or the church for which he has been a steadfast warrior; ignore their consequently blinkered conviction that he must be innocent at all costs. Look at the facts. These include, apart from the evidence in Pell’s own case, the objective truth of child sexual abuse. It happens in the dark. Its perpetrators are men of power, wielding that power, frequently within institutional settings. The royal commission exposed that the men who do this evil are men like Pell. That doesn’t mean that Pell is guilty, of course. It means that the loud protestation that he could not be guilty because of who he is, is as lacking in foundation as the Catholic Church’s continuing claim to moral authority.” 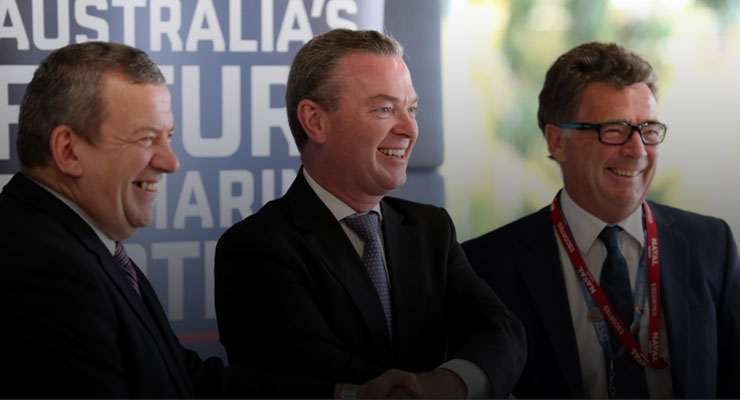 “Several senior Liberal Party insiders have circled the submarine deal since its inception. Sean Costello, former chief of staff to former defence minister David Johnston, joined Naval Group’s Australian arm in March 2015 within months of leaving his ministerial post. He remained the CEO of the company until March 2017. And late last year, as negotiations around a so-called strategic partnering agreement stalled, Naval Group hired former Liberal candidate and confidante of Scott Morrison, David Gazard, as a consultant. Gazard, who is part of Peter Costello’s lobby group, ECG Advisory, was reportedly hired by the French shipbuilder to help improve its rocky relationship with the Defence department.”

Conservatives can make the best case against another Middle East debacle

“In the absence here of a genuine diversity of informed conservative viewpoints of the kind that distinguishes commentary in the United States, it’s easy to fall into the trap of seeing Australia’s participation in another military venture through an ideological and partisan lens: that opposition to participating in Trump’s armada must be the province of the far left and adherents of anti-Americanism.

In fact, the strongest arguments against Australia joining yet another Middle East intervention are conservative ones.”

Australia’s climate change inaction is now bipartisan. Protest is all we have left –  Jeff Sparrow (The Guardian): “That “bipartisan approach” means that those concerned about climate change can’t realistically hope for any action from parliament. Oh, there are minor parties, of course. But the world’s leading climate scientists gave us, in the most recent IPCC report, a mere 12 years to prevent temperature rises above 1.5C – and one of those years is nearly up. There simply isn’t time to wait for the Greens or independents to become electoral forces. That’s why activists are sitting on roads in Queensland. It’s why school students plan to walk out again in September and why a new coalition intends to blockade the International Mining and Resources Conference in Melbourne in October. For what else can they do?”

Speaking out on sex abuse should not generate more abuse ($) – Dhanya Mani (The Daily Telegraph/Herald Sun): “I would like to tell you that I didn’t go through what so many survivors before me have been through. I would love to say I’ve been roundly respected, valued and validated after sharing my story. Unfortunately, my experience — like that of many survivors of harassment and assault — has been defined by new and unique assaults on my sense of self, my credibility and my agency. It is hard to put into words how disorienting and re-traumatising it has been to watch my identity be endlessly twisted, manipulated and reformulated — mostly, in ways that have been distressing, deeply hurtful, and untrue.”

Religious freedom becomes a minefield in our cultural melting pot – Pru Goward (The Age/Sydney Morning Herald): “Church leaders appear not to want an anti-discrimination act but instead a more positive affirmation of religious freedom. Affirmative legislation is not the Australian tradition. Australia had that opportunity in 1975 with the Racial Discrimination Act and Gough Whitlam, just as Bob Hawke was to do with the Sex Discrimination Act of 1984, stayed with the art of the possible. It is a big step to go from protecting members of particular groups from harm to positively promoting their interests. There is no sign that the current Attorney-General, Christian Porter, will depart from this view, especially with its implications for a bill of rights.”

What matters to the local Black Lives Matter movement

Religion does not want protection, it wants the freedom to protect its power and its bigotry. Observe how the issue has been converted by the Right into one for “people of faith” when all other faiths (certainly Islam) are implicitly excluded.

Promoting religious bigotry is popular with the bigots. Religious bigot morrison can’t leave it alone. Instead of doing something to strengthen the stand against China, we will clearly have to make, or practicing the Christian forgiveness he certainly does not preach, or striving for better wages for others than himself, he obsesses with the inadequacy of discrimination available to men who are old, rich and white. Hence a 2018 “religious discrimination” “review” by one Ruddock, himself noted for his brutality towards asylum-seekers.

Such is the hatred for rights for ordinary people generally of the Liberal Party generally that Liberal MPs who backed same-sex marriage including Trent Zimmerman, Tim Wilson and Dean Smith — the architect of the enabling legislation — have indicated they are open to a Religious Discrimination Act so long as the measure is not seen as the introduction of a bill of rights by stealth.

Contrast Labor’s feed-their-greed approach with what is said to be the British approach. When faiths take public money to run schools and hospitals in the UK, they have to play by secular rules. The choice is stark: faith or funds. Very suddenly, these pretend Christians find that they no longer need the right to sack gay staff and expel gay kids.