Tim Fischer was a genuine maverick, with very good and very bad points, but he leaves a legacy of real achievement in public life.

The late Tim Fischer was always a maverick, eccentric even, especially in his early days as a state MP in New South Wales parliament, when his penchant for media attention saw him featuring more often in Stay In Touch than in the politics section of The Sydney Morning Herald. A trainspotter, shy, Catholic, prone to anachronism — he is famously said to have urged his staff “don’t fax that, it’s the last copy!” — and a Vietnam veteran, Fischer became a politician in the early ’70s and stayed one until the eve of the 21st century, retiring as deputy prime minister in 1999. When he did, he quipped that the media had only just stopped referring to him as “idiosyncratic”, which told him it was probably time to go.

But from the perspective of 2019, however, Fischer looks not just eccentric, but like a visitor from another planet. Fischer’s passing has been an opportunity to rightly hail his achievement, with John Howard, of reforming Australia’s gun laws and implementing a national gun buyback scheme against furious resistance from regional communities, in the wake of the Port Arthur massacre.

The political and personal bravery of those two men, and Fischer in particular, was remarkable — people now forget that it was support for gun law reform that helped end Rob Borbidge’s government in Queensland in 1998. Fischer led the way in going out to regional communities and making the case for reform, in the face of white-hot anger from his own voters. He was called a traitor, and hanged in effigy, in Gympie in Queensland. The best reforms are made against the demands of your own base, and Fischer’s achievement on gun laws was one for the ages.

Fischer also understood something that today’s generation of Liberals and Nationals have forgotten: that One Nation not merely can, but must, be fought. With Fischer labelling Pauline Hanson’s vilification of Chinese-Australians divisive and wrong and attacking her economic lunacy, and Queensland senator Ron Boswell assiduously exposing One Nation’s links to the far-right fringe groups, the Nationals held the electoral line against the first outbreak of Hansonite racism in the 1998 election. Fischer, unlike his successors, never forgot the lesson. Earlier this year, he called for One Nation to be placed last by the Nationals after revelations it had treacherously sought funding from extremist US groups to undermine the Howard-Fischer gun laws. Instead, Nationals in the LNP preferenced One Nation, helping deliver Hanson her best electoral result ever.

But Fischer himself was no angel on race issues. His comments in the wake of the Mabo decision were vile. “Dispossession of Aboriginal civilisation was always going to happen … We have to be honest and acknowledge that Aboriginal sense of nationhood or even infrastructure was not highly developed. At no stage did Aboriginal civilisation develop substantial buildings, roadways, a wheeled cart as part of their different priorities or approach.” After the Wik decision — which Fischer attacked the High Court for delaying, in remarks he later had to apologise for — he infamously promised “bucketloads of extinguishment”.

But to add to the curate’s egg that was Fischer, he was the only major party leader of recent decades prepared to talk about Israel’s occupation of the West Bank and its abuse of Palestinians, and prepared to state the truth about the influence of the Israel lobby in Australia. And he did so regardless of the usual slurs and smears of “anti-Semite” directed at him by pro-Israeli groups (his Liberal successor in the seat of Farrer, Sussan Ley, bravely continued his truth-telling on Palestine).

He continued to do this after his time in public life, and liked to bring up Israel’s attack on the USS Liberty in 1967, enraging groups like AIJAC by noting Israel had deliberately attacked a USS intelligence-gathering vessel — an attack since covered up by both governments. In the intervening years, Fischer has been completely vindicated — there is no longer any doubt that Israel attacked, and kept on attacking, the Liberty despite knowing it was American.

Rare is the senior Coalition figure prepared to fight Pauline Hanson or tell the truth about Israel. But Fischer, for better and for worse, was one of a kind. He leaves a greater legacy than most of his contemporaries — and greater than anything the lesser men and women who’ve come after him will leave. 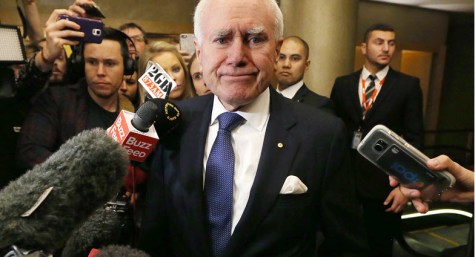 Sorry, conservatives, but even Howard would struggle now

It feels like damning someone with faint praise to say that he was a “good person”, but thats my main impression of him, which is more than I can say about most of his peers on both sides of the benches.

20 years on and the Coalition has long since sold its soul to the redneck. The parleying with the Shooters, One Nation and Palmer has now seen the introduction of the Adler B220, 5 shot lever action 12Gauge shotgun. This gun has three main purposes, wounding fauna, vandalising road signs and killing people. Good one Liberals, you’ve wiped your arse with the legacy of the likes of Tim Fischer and others. What a total bunch of arseholes you’ve become!

Most of the creatures currently infesting the Hole-in-the-Hill are so far below Timbo that they would get a crick in their brass necks peering upwards at his knees.
Good that you mentioned the ‘bucketloads…’ though – it took a texter to remind PK during Thursday’s RN Drive (6.38pm) and she seemed puzzled by the reference.

Tim the Dim needed an interpreter to sort out his sub ninety IQ mutterings.. the press gallery had to bowl slowly to Tim..

We need more like him…sadly we now live in an era where “retail politicians” are celebrated and we continue the steady downward decline in the quality of leadership. Those that perceive themselves as leaders are often little more than followers.