Let’s be explicit about this: South Australian wind farms did not shut down because the winds were too low or high.

The Australian Energy Regulator has announced it’s suing four wind farm operators, alleging the software settings on their turbines resulted in those turbines tripping offline during a massive storm in September 2016. This sudden shutdown, caused by big voltage dips, resulted in an overloading of the interconnector which was trying to compensate for the sudden loss of power. The interconnector shut down, separating SA from the other states, and resulting in SA’s entire grid shutting down.

That paragraph is confusing. It’s a weird flurry of unfamiliar terminology. This confusion buries a very specific and simply understood trick of causality and consequence.

Since the blackout happened in 2016, the event has taken on a mystical significance among opponents of decarbonisation, deniers of climate change and proponents of fossil fuels. Presenting this event as irrefutable proof of the immediate and apocalyptic harm of decarbonisation is a long-running and significant project in Australia.

How we get ourselves out of energy chaos

The goal here is seemingly to take a curable and temporary problem — a bunch of immediately-rectified variables in the software settings of a sub-set of turbines in South Australia — and turn it into an intractable, incurable, horrifying and unfixable apocalypse inherent to wind energy. This is only fixable, so the thinking goes, if we take roaring chainsaws to the base of wind turbine generators and erect belching smoke stacks between their metallic, ragged stumps.

Here’s an example, from Angus Taylor, experienced anti-wind farm campaigner and Australia’s current Energy and Emissions Reduction minister, on Sky News: “That generation needs to be properly integrated. It needs to perform, particularly in circumstances that are tough like we saw at the end of 2016 in South Australia. It also means that solar and wind need to be backed up appropriately so when the wind doesn’t blow and the sun doesn’t shine, customers know that when they flick the switch the lights come on.”

Graham Lloyd, environment editor at The Australian, parroted Taylor’s lines saying, “it has led to greater scrutiny of the amount of renewable energy that can be put into the electricity system without back-up”. 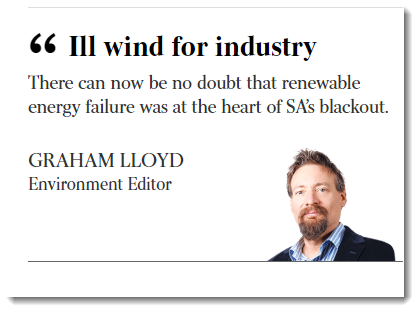 Did you see what happened there? One second, we were talking about numbers punched into a computer inside a wind turbine. The next second, we’re talking about how wind speed varies: a problem inherent to the resource it’s capturing.

“Renewable energy failure was at the heart of SA’s blackout” increases in mystical, spiritual power the more times you chant it.

Not every wind turbine in South Australia had these software problems. Four wind farms rode through through with minimal variations in output as a natural response to voltage fluctuations. Waterloo saw some variation due to a tool for managing voltage fluctuations called “active power management”. The remainder “have a protection system that takes action if the number of ride through events in a specific period exceeds a pre-set limit”. 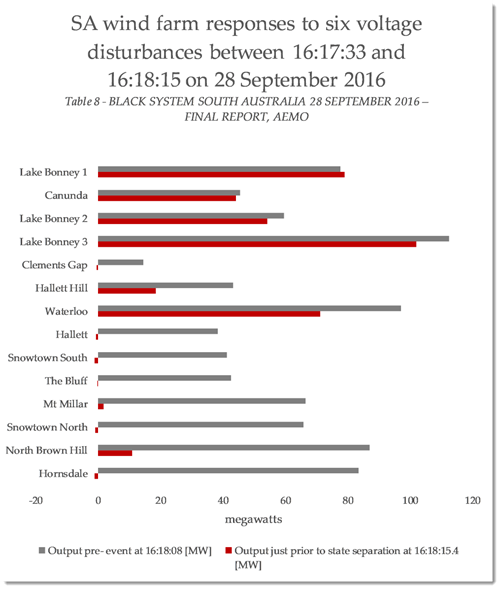 So when Angus Taylor starts talking about the wind “not blowing” and the sun “not shining”, he’s referring to something completely different; he’s converting this rectifiable problem into a systemic, unfixable flaw.

Further, framing the South Australian blackout as punishment for the sin of decarbonisation started on the very night of the event, when Chris Uhlmann, then the ABC’s political editor, said this: “40% of South Australia’s power is wind-generated, and that has the problem of being intermittent — and what we understand at the moment is that those turbines aren’t turning because the wind is blowing too fast.”

This took the nature of wind power — that it varies according to wind — and applied that as the cause of the event (“turbines aren’t turning because the wind”). These moments are significant — a mad scramble to form reasons, in the literal immediate aftermath of the event, to figure out why wind power was to blame.

He tried again the next day, switching from “not enough power” to “too much”:

Wind power was simultaneously generating too much and nothing at all, just prior to yesterday's #SAStorms blackout o_O pic.twitter.com/NhK4Y5NsDN

Over time, Uhlmann’s statements changed shape. He claimed that wind farms only generate “30% of the time” — another statement based on a major misunderstanding of capacity factor. He then claimed that the frequency of wind turbines “fluctuates with the breeze” — which is also wrong.

Not only do most of these declarations remain on ABC websites, an ABC investigation into Uhlmann’s segment cleared him of any journalistic wrongdoing. “[He] neither stated nor implied that the blackout in South Australia occurred because of South Australia’s reliance on renewable energy”, they somehow formulated of that specific segment. This came with no reference to Uhlmann’s claim, on the previous night, that “turbines weren’t turning” due to insufficient wind.

Uhlmann now seems vindicated by the energy regulator’s decision to commence proceedings against the wind farms, despite the fact that it relates not to the characteristics of wind power, but to variables on specific turbines.

Uhlmann’s dual position — initially, that he was never blaming renewables (‘just asking questions!’ was the plea accepted by the media authority), but that he was also right to blame renewables, is a perfect example of how the facts change constantly to fit a pre-existing conclusion.

Of course, system strength, inertia and frequency control are important issues. Uhlmann touches on this, but confusingly seems to be insisting that SA would’ve stayed online if traditional thermal generators dominated its grid. There’s no way to know this without detailed modelling, but none has been done.

The political capital of the South Australian blackout is inexhaustible. It was revealed that the Chamber of Minerals and Energy, Western Australia, was linked to an army of fake Twitter accounts blaming renewables in SA for the blackout. The talisman became so powerful that Sky News’ Chris Kenny felt comfortable linking a plug falling out of a wall at an Adele concert with South Australia’s wholly manufactured “energy crisis”.

This is only the start of a massive re-prosecution of the firestorm that followed the 2016 blackout. Intentionally re-framing this issue as a problem with the “intermittency” of wind is serious business.

This doesn’t mean there won’t be big challenges in the future with integrating renewable energy. But the raw reality of this phenomenon as a manufactured crisis — a big, single dramatic event that serves as a protected political species — is clear. Most blackouts still happen due to problems in local powerlines.

Uhlmann also complains of the number of times the Australian Energy Market Operator (AEMO) has to issue directions to generators in South Australia to preserve system strength (ordering coal and gas to stay online, or solar and wind to limit output): “South Australia’s power system is on life support, kept afloat by now routine interventions by the energy market operator”. 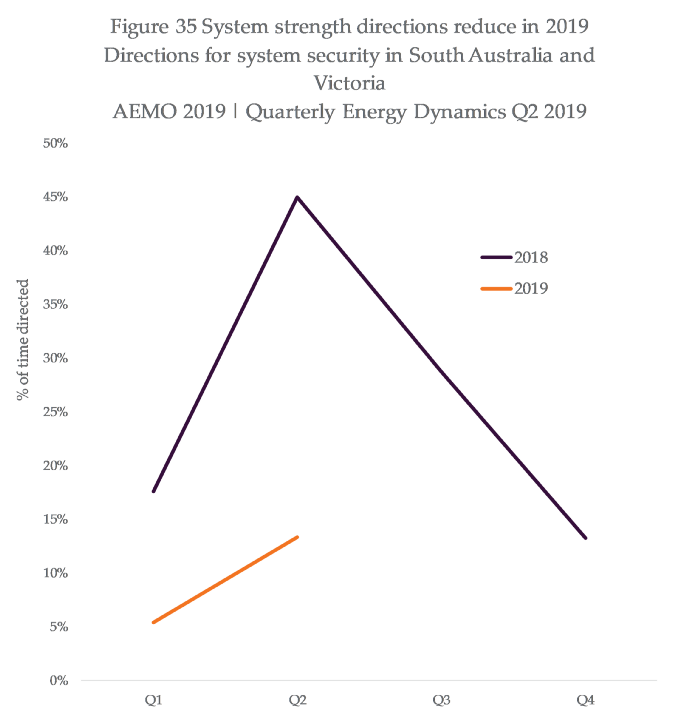 Part of the reason for these decreases is seasonal, but the year-on-year differences suggest AEMO’s getting better at managing these directions.

Here’s the real kicker: in March 2017, there came a real, specific test of whether the problem that caused those seven wind farms to shut down had been properly resolved. A piece of kit in a transformer in Torrens, South Australia, literally exploded and 610 megawatts of gas-fired power suddenly disconnected.

From the AEMO: “All wind farms in SA successfully rode through a series of three transmission faults in short succession on March 3, indicating the changes made to their protection system since September 28 2016 have been successful”.

Again, no, this doesn’t mean that every challenge of integrating renewables has been solved. But the specific cause of this event as it relates to wind power has been demonstrably resolved. What more is there to say?

This is an edited version of a piece which originally appeared on Medium. Ketan Joshi is a science, technology and data communications professional.

How do you think this issue has been politicised? Write to [email protected] and let us know.