Government racks up another win in its wage stagnation policy

Australian workers were stuck for another quarter with stagnant wages, the latest figures show. And this Groundhog Day is going to be repeating for a long time.

The government is at least having one success with its economic policies: its policy of deliberate wage stagnation is a raging success.

That’s the third quarter in a row WPI growth has been at 2.3% annual growth and it means the budget forecast of 2.5% growth has also been missed — even after it was lowered.

But the repetition is magnified to Groundhog Day levels when you look at the composition of the numbers: it was strong pay rises in the public sector that bumped the number up. And guess where the pay rises were? Yep, health and social care.

According to the Australian Bureau of Statistics (ABS), “the most significant contribution to wage growth this quarter came from the public sector component of the health care and social assistance industry, where a number of large increases were recorded in Victoria under a plan to ensure wage parity with other states”.

That pushed health and social care to top position among industries, a position it has held more or less unchallenged in recent years, and made Victoria the state with strongest growth. In fact, if it wasn’t for the Andrews government giving pay rises to public servants, growth nationally would have fallen to 2.2% or even 2.1%. It also means Victoria, at least, is complying with Reserve Bank governor Philip Lowe’s call for governments to give higher wages to public servants in an effort to lift overall wages.

None of this is any surprise — the only surprise is that the economy keeps underperforming expectations. Remember all the claims of the big bang that Scott Morrison’s tax cuts — not to mention his re-election — were going to have for the economy? It’s now looking more and more like the tax cuts won’t do much, and the boost to confidence from the election was a classic dead cat bounce.

On Tuesday, NAB’s July monthly business survey — which the Reserve Bank looks closely at — showed, for all the talk, little change in a tepid economy, with business conditions down and business confidence up a little but still below average. NAB’s chief economist, Alan Oster noted “while there were some positive signs with a post-election lift in confidence, this bounce now looks to have been short lived with confidence also tracking at below average levels in the two months since the election”.

Retailing, in particular, is a black hole (NAB called a recession for the retail sector in its May survey). “Weakness in the retail industry continues to stand out, with conditions in that industry at recessionary levels — and declining further in the month. A worrying result, given we expected some boost to the industry following the post-election tax cuts.”

On Thursday we’ll see the July labour data from the ABS. Fingers crossed it doesn’t contain a nasty surprise — some economists are forecasting a rise in the seasonally adjusted jobless rate to 5.3%. That will put real pressure on Treasurer Josh Frydenberg who — to the extent he’s ever seen in public, given he must be the lowest profile Treasurer since his Victorian predecessor Ralph Willis — stolidly continues to insist the budget surplus is the only thing the government is interested in. 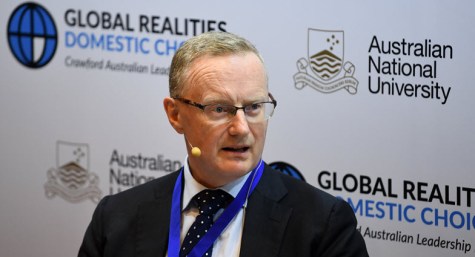