The Saudi regime extends its international PR program to a science symposium at the University of Sydney. Plus other tips of the week.

USYD x Saudi Arabia. With the media spotlight firmly on Chinese influence in Australian campuses, the University of Sydney was welcoming another deeply authoritarian regime — Saudi Arabia. On Saturday August 3, rooms in the law school played host to the “4th Saudi Scientific Symposium”, organised by the Saudi Arabian Cultural Mission in Australia, which is in turn backed by the Saudi Ministry for Higher Education. This is at least the second year that the university has sponsored the event, which says it “aims to develop the research of postgraduate candidates through networking opportunities with other researchers in the areas of medical sciences, engineering, computer and applied social sciences, and humanities”. For some strange reason, posters for the event stayed up for the entire week after it was held, in time to coincide with the start of semester.

Such events ought be treated with caution given the Saudi regime’s highly sophisticated and influential foreign influence campaign — which has allowed it to largely get away with treating women like property and bombing Yemen. A spokesperson for the University said this annual event was “entirely organised and managed by the ‘Saudi Student Club in Sydney'”:

Abandon all Tudehope. NSW Finance Minister Damien Tudehope recently backed one of Mark Latham’s pet projects. One Nation MLC Latham has been sending out information packs — produced by anti-LGBTIQ group Binary Australia — to 500 P&C committees to “help” parents “keep their child safe against radical transgender indoctrination”. But could the incident could be another example of the current government’s blurring divide between church and state?

Tudehope has been connected to the Opus Dei branch of the Catholic Church for years, and has given several talks to students at the University of NSW’s Warrane College, a residential college run by Opus Dei. Tudehope’s son, Tommy Tudehope — who attended Opus Dei school Redfield College — has also spoken to Warrane’s students about the proper use of social media. Another of Tudehope’s sons, James Tudehope, went on to work as the assistant dean of Warrane College.

Latham, for his part, has recently said Christianity is “vital“. It’s shaping up to be a holy union between the two.

Nine says ‘close enough’. The papers-formerly-known-as Fairfax have gone hard on the brewing Australia-China-US cold war, perhaps unsurprisingly after the groundbreaking Crown revelations. After publishing Liberal MP Andrew Hastie’s divisive “Nazi Germany” op-ed, Nine papers have been pumping out praise from former US fleet commanders and Australian intelligence chiefs, fallout from Coalition members on either side of the “Nazi” line, and even criticism of sympathetic uni activists from Silent Invasion author Clive Hamilton.

Now, they’ve made either a fairly sizeable slip-up — invoking  Japanese artist Hokusai’s iconic “Great Wave off Kanagawa” in a weekend splash of the China-US trade war. China and Japan currently make for Australia’s first and second largest trading partners respectively, so Australians might do well to start discerning Asian art out of economic, if not basic cultural, concerns. 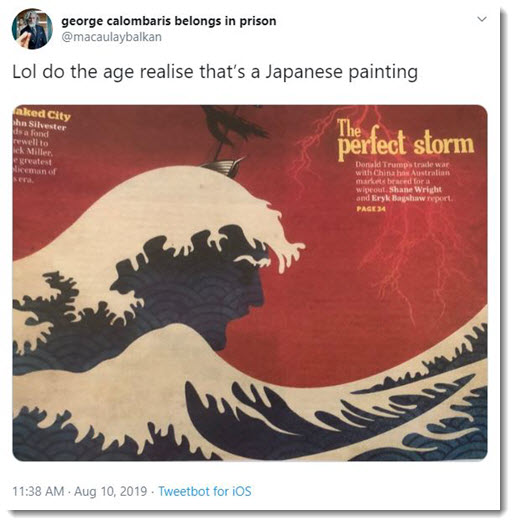 … shome mishtake shorley – ‘saudi’ & ‘science’ would seem to be the ultimate contradiction in terms.

As for Now, they’ve made either a fairly sizeable slip-up… – I’m still waiting for the “or….”