Good morning, early birds. The NSW abortion bill has passed the lower house amid fierce debate, and a new IPCC report highlights the land sector's contribution to climate change. It's the news you need to know, with Chris Woods.

A bill to decriminalise abortion has passed the New South Wales lower house, with new amendments extending safeguards around informed consent, provisions on conscientious objection for doctors, and requirements for specialists and approved public facilities for late-term abortions.

The ABC reports that the bill passed just before 11pm last night, with 59 votes in favour and 31 against. The bill will now head to the NSW Legislative Council. The lead-up to the debate was marked with misinformation over late-term abortions, and criticism of Premier Gladys Berejiklian for not speaking on the proposed legislation.

The Intergovernmental Panel on Climate Change (IPCC) has released a new report on the impact of global heating on both ecosystems and the land itself, finding that increased droughts, soil erosion and wildfires will correspond with diminishing crop yields and thawing permafrost near the Earth’s poles.

The Guardian reports that the new inquiry highlights how changes to the land sector produce just under a quarter of global emissions, notably through cattle herds, the destruction of forests and overuse of chemical fertilisers.

The report comes as The Courier-Mail ($) reveals that Queensland deputy premier Jackie Trad wrote to federal Treasurer Josh Frydenberg in the wake of the election calling for a new clean economy agreement, a call Frydenberg rejected.

The Australian government remains unconvinced that a massive influx of Chinese development in Cambodia is not a disguised military base, as China rejects Australia’s “Cold War mentality”.

The Sydney Morning Herald reports that both China and Cambodia continue to deny that their agreement involves plans to station troops and weapons at the site. Liberal MP Andrew Hastie, who compared Australia’s inability to contain the rising superpower to the “catastrophic failure” to stop the rise of Nazi Germany, has been praised by Coalition and Labor colleagues (although invoking Nazism earned a few rebukes).

But if you, my fellow handballers … also happen to think that Junkee are a bunch of humourless, anti-handball narks, then why not take this to their own Facebook page and tell them what you think.

After calling himself the “global handball king”, the former prime minister has a go at youth news website Junkee for some reason. The High Court got the law right on Banerji, and that law is wrong

“The High Court’s judgment in the case brought by former public servant Michaela Banerji comes at a very interesting moment. Thanks to the recent rash of Folau family sackings, everyone is talking about the contest between personal freedom and the employment contract. But how comparable are these cases? And what are the state of our freedoms when you can get sacked for being mean to the government on Twitter?”

My family tragedy was turned into true crime

“I’m writing to address the statements made by Maryrose Cuskelly in an article published in Crikey last month. I’m writing to defend my objection to this author’s inclusion in the Bendigo Writers Festival (BWF). I’m writing to outline my objections to the content of Cuskelly’s true crime book, Wedderburn: A True Tale of Blood and Dust, and how it was contrived. I’m writing to provide my first-hand insight into the pain, distress and utter devastation that this book’s very existence has inflicted on myself and my immediate family.”

“Utoya… Christchurch… El Paso… that shrieking sound is the strings tightening, to snapping point. Three major white supremacist massacres, with a number of ‘smaller’ ones, attacks on churches and synagogues, interspersed. As violent Islamic extremism has been contained and demobilised in the West — although it may be a pause, rather than a cease — hard-right white terrorism has become patterned and regularised.”

‘Doing nothing a non-option’: Porter pushes ahead on Family Court reform

RBA has ‘got it wrong’, says key Labor MP ahead of bank grilling

Time to end the paradox in BHP’s response to global warming — Bob Carr (The Sydney Morning Herald): “The federal election in May relegated the prospect of ambitious carbon emission targets. But there’s been no slowdown in business planning for a post-carbon future; the strongest confirmation has been the speech by Andrew Mackenzie, CEO of BHP, the world’s largest mining company.”

How Chinese investment is challenging our academic freedom ($) — Bella d’Abrera (The Daily Telegraph): “Recent scenes of chaos at the University of Queensland as pro- and anti-Hong Kong freedom demonstrators squared off on campus, and reports that the Chinese-based families of anti-communist protesters have received visits from Beijing’s security apparatus, are only the tip of the iceberg when it comes to infiltration of our universities by the Chinese Communist Party.”

Writing as a Sovereign Act — Melissa Lucashenko (Meanjin): “If you trace it back far enough you get to a Latin root, super, meaning ‘over’. So sovereignty in the English language really means being on top. Being the one with the power. ‘Highest, supreme or chief.’ Pretty easy concept. You look at the Queen of England and of Australia. She’s the one on all the coins.” 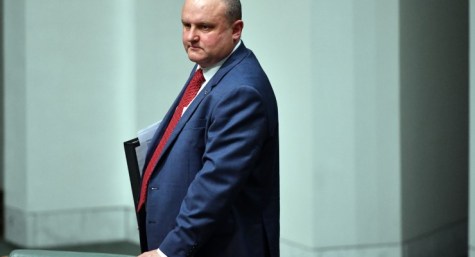 Ministers on blast for racist comments