Crikey has been told by local contractors that Downer Group owes them a sizeable debt. Plus other tips of the day.

What a Downer. Construction giant Downer Group has run into a spot of bother on one of its projects in Victoria’s south-west. The company has been locked out of a number of quarries that have been supplying it with stone to construct a transmission line between the Dundonnell wind farm and the Mortlake power station, for its client AusNet.

Crikey has been told by local contractors that Downer owes them a sizeable debt, and attempts to get in contact with the company to discuss payment have failed. Downer owe one contractor almost $1 million, with more than $200,000 of that amount now overdue. However, when we contacted Downer, a spokesperson for the company claimed that its “work on building the substations and supporting infrastructure for the Dundonnell Wind Farm is still underway. Some partial and full road closures are in place for safety reasons, and these have been approved by the Council. These are not affecting access to the wind farm.”

Downer has had a rough year. In May this year, the company took a $400 million dollar hit to its market value after its German partner Senvion, a manufacturer of wind turbines and its partner in the $380 million first stage of the Murra Warra wind farm project, went into administration. The company announced last week that it will take a $45 million pre-tax loss on Murra Warra as a consequence.

Major road oversight. Protesters fighting to save Djab Wurrung trees along Victoria’s Western Highway were yesterday hand-delivered 14-day eviction notices by Major Road Projects Victoria (MRPV). As Crikey contributor Daniel James points out, the saga is something to bear in mind whenever one hears the Daniel Andrews government tout its progressive credentials on Indigenous issues. 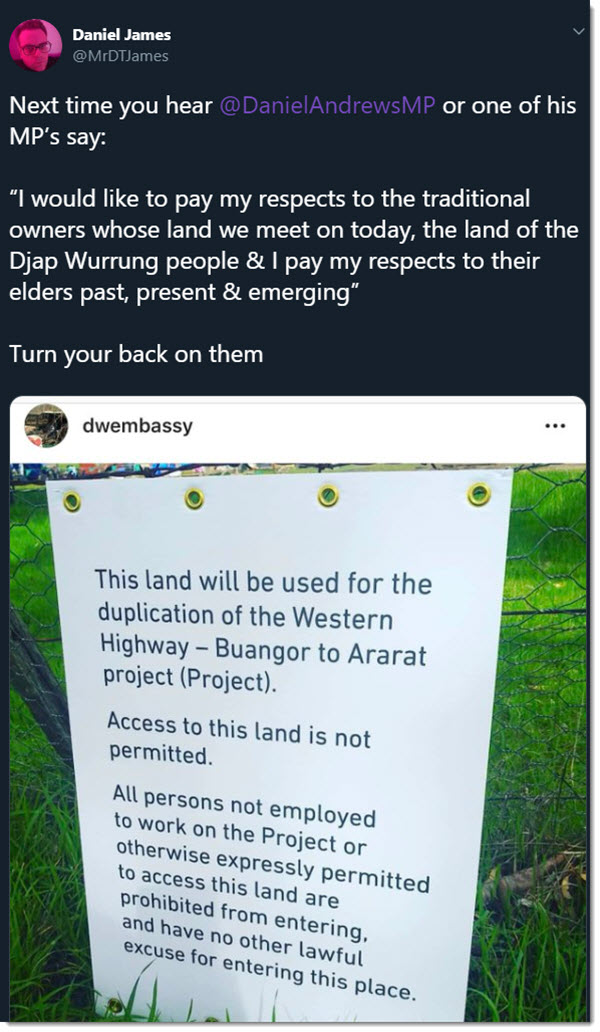 The Djab Wurrung Protection Embassy has now protected the site from destruction for 14 months, securing minor victories after MRPV promised to protect over a dozen sacred trees previously, mistakenly marked as culturally unimportant, but recently lost an appeal to Environment Minister Sussan Ley to protect the entire landscape. However, Zellanach Djab Mara, lore man at the Djab Wurrung Protection Embassy, tells Crikey that the notices do not appear to have been signed by a judge, meaning that, after 14 days, MRPV will have to escalate the matter if it hopes to get police involved for physical evictions.

Ruddy hell. It seems strange when a man who once delivered the (totally prepared) gag that the only person he’d turn gay for was his own wife to go a publication for their “lack of humour”, but here we are. Former prime minister Kevin Rudd — presumably to ward off those headaches he gets when people aren’t looking at him — put out a video announcing his return to the handball arena following knee surgery, offering a game to anyone who contacted his office. Then, when Junkee provided the response that anyone would assume Rudd was going for — a little light in-print ribbing — Rudd returned to social media to describe Junkee (which he’d “never heard of” apparently) as “humourless narks”(sic): 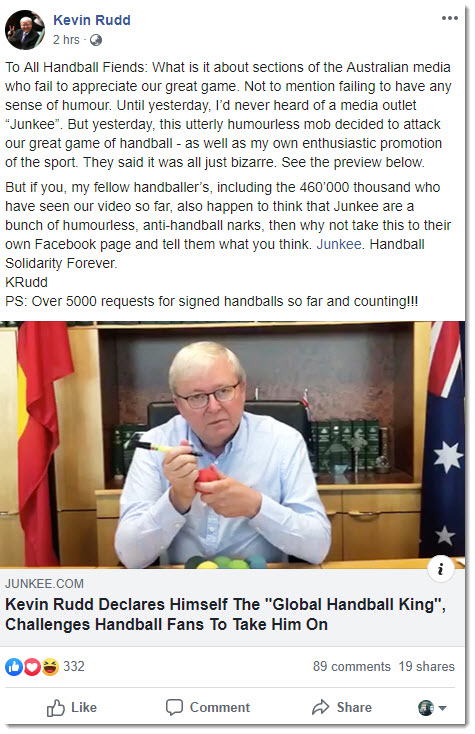 I mean, we’re pretty sure he’s joking around, but the fact that we’re not certain doesn’t say anything good.

Faine-ing interest. While there’s been plenty of hypocrisy from the right’s free speech fundamentalists about the case of sacked public servant Michaela Banerji, Victorian senator and IPA spawn James Paterson actually managed to stay consistent, and reasonably sensible, on the subject. In an interview yesterday with the ABC’s Jon Faine. Paterson’s take was that if Banerji had been criticising government policy in areas she didn’t have to actually implement — he used climate change as an example — then sacking her would have been “unfair and unjustified”, but sacking her for undermining policy in the area she was working in was appropriate. This strikes us as a reasonable place to draw the line in preserving public servants’ free speech versus making sure governments and the public can trust public servants to implement government decisions properly. But what caught our eye was ABC broadcaster Jon Faine arguing to Paterson that online anonymity should be banned entirely.

According to Faine, anonymity is “just a licence for trolling and that is one of the biggest problems for mental health, for racial vilification, for abuse of people in the most toxic way it is. In fact, I think that it is at the very core of where democracy is coming unstuck at the moment.” Paterson rightly pushed back, arguing that a lot of people actually needed online anonymity because of legitimate concerns about their safety if people linked their real world selves to their views. Maybe Faine, before he leaves the ABC, should tell them to ignore any future leaks from anonymous whistleblowers or sources.

When your name is Scott Morrison or Tim Wilson or James Paterson or Mark Butler or something similarly unremarkable and widely shared, you don’t need online anonymity to protect you from the crazies, or govt ministers, who might get upset about your views on an issue. But when you have an uncommon name, like for example, Bill Shorten or Joshua Frydenberg or John Setka or Cheryl Kernot, you need to protect yourself through anonymity.

“sacking her for undermining policy in the area she was working in was appropriate. ”

Why do politicians, and senior public servants, have the illusion that just because their staff don’t go out in public criticising policies, that this means they are not critical of them. Of course, they often are. They are public servants, not Government servants.

Why would it matter if they anonymously criticised a policy, other than thin skin on the part of their boss? It is the same as anyone else criticising — except possibly better informed.

Their public service duty is to implement government policy whether they agree or not. Their private moral duty is to be critical of things that they believe are evil. By being anonymous, they avoid undermining their work, while also contributing to public debate.