Even if we wanted a unilateral unquestioned alliance with the US, based on an unspoken shared racial history, we can’t have it anymore.

So it was these past few days with US secretary of state Mike Pompeo coming to town for AUSMIN talks to tell us that the US-Australia alliance was “unbreakable”, commonality of interest, heritage, blah blah blah.

It was an extra special treat, given that the appearance occurred as the US repudiated the INF missile treaty. Alongside all this, the US raised the prospect of China-range missiles in Darwin and the “hope” that we would become part of a US-allied force policing the Straits of Hormuz on the basis of some very dodgy accusations of shipping interference by the Iranians.

The right and the foreign policy establishment was in paroxysms of joy. They mentioned us! They mentioned us! God knows what the scene was like at the Centre for Independent Studies, but I hope they own a lot of mops. We haven’t even heard from Greg Sheridan yet. It is quite possible that he became so excited that he simply exploded.

Come the next day, and China nudges an already downtrending yuan below the important seven-to-the-dollar line. The Australian stock exchange takes a nosedive, and everyone gets the heebie-jeebies about the fragility of our economy. At a talk at the Centre for Independent Studies, the US secretary of state had been at his most Pompeous. “You can sell your soul for a pile of soy beans or you can protect your people”, he said, a lot less conciliatory (and a lot more consigliere) than he’d been during the official AUSMIN festivities. Ah, soy beans! Soy boys! You see what he did?

Yes. But did you see what China did? No, I don’t believe the share dive was only due to the yuan shift, or that the moves were aimed principally at Australia. In short order the US has announced a $300 billion tariff wall, European and US shares have dived, the yuan has devalued and the US has branded China a currency speculator. And amid all this, we have volunteered to be a hot zone for US forward defence. They mentioned us! They mentioned us!

With indecent haste, quite a few of the right have swung their guns around from global neoliberal economics — extend markets everywhere, and smooth the way of capital — to a new statism, in which any other relationship aside from power blocs is held to be a left-wing(!) fantasy. The loosening of the neoliberal world order and the rise of power blocs — in our case, based on our racial-civilisational history, rather than our geographical position — promises many of those in the elite circle of military/political/right chatter what they’ve always wanted. Namely, a political culture oriented to martial notions of patriotism, tradition and national collectivism, rather than the global-consumer subject of free trade.

Sadly, their desires don’t amount to a hill of soy beans in this crazy old world. After decades of global cheap goods, “soy beans” is exactly what we want — if by “soy beans” is meant, for us, the smooth and uninterrupted sale of our resources, and for the US, the continued access to acres of imported cheap stuff, which is all that many Americans can afford.

The Walmart effect — hardly coincidental that a racist white shooter would choose a branch of that store on the US/Mexico, global north/global south border — is that Americans will accept lower-paying jobs in exchange for ready work, because the costs of a basic lifestyle are low. It wouldn’t take much of a price shift for life to get noticeably tougher for many millions in the rust-belt states that won Trump the election. The Trump they voted for made different noises about foreign policy, but the overall tenor was an isolationist one, with a bit of Reaganite frou-frou (“we’ve got to start winning!”). Trump’s early missile strike on Syria was well-received, but nothing major. If he, or his operators, had any confidence in American bellicosity, they would not have withdrawn from the threatened strike on Iran in June.

The same is true here. The Coalition offered up Scott Morrison as the “daggy dad” PM for “the quiet people”. That worked enough to stop a switch to Labor because it reassured enough swinging voters that the Coalition was no longer in the hands of the right-wing clash-of-civilisation crazies who had made themselves visible after 2013.

Hence the lack of enthusiasm to sign on for the Hormuz mission. If Mr Tony were still in charge, he’d already be doing it, in a surf watch kayak. Hmmm, he has some spare time. Perhaps that could be our contribution.

That won’t delay a greater reckoning for the Americophiles. For decades, bipartisan settings have been so jammed on a pro-Asia neoliberal setting, as to have a material and ideological effect. Even if we wanted a unilateral unquestioned alliance with the US, based on an unspoken shared racial history, we can’t have it anymore. We’ve already got a society that’s been trained — for good and ill — to think of large-scale war as part of the past, like the hula-hoop (or involving, as the main enemy, zombies).

In another twenty years, with our current immigration settings, Australia will be so culturally hybrid that the socio-cultural base for an unquestioning US alliance will no longer exist, and any attempt to enforce it would tear the social fabric apart. It’s the so-called “realists” who are the fantasists in this equation, hoping to grow their missile towers from magic soybeans. Or hasbeens.

Still, they mentioned us! 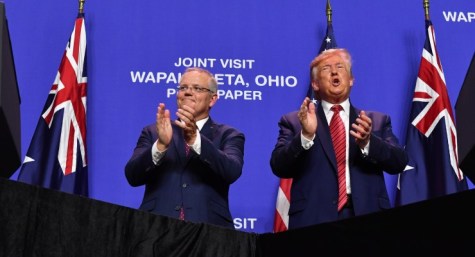 What a second century of US ‘mateship’ might well mean — less bark, more bite 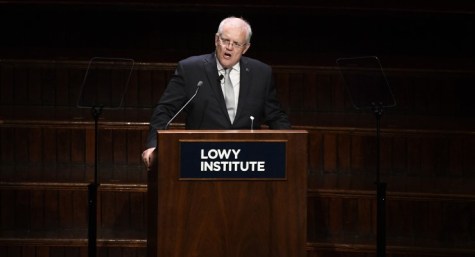 Despite being a profoundly depressing (and accurate) take on it all Guy, you’ve at least made me laugh out loud with the mention of Greg Sheridan’s possible fate.
He’d be so perfect as Mr Creosote. 🙂

I really hope for the sake of this country that your description of Australia 20 years hence is in fact what we are. What will the warmongers do when the very possibility of war has diminished? I suppose they will all be working for whatever is left of the fossil fuel industry by then.

We are being invited to join this new Coalition of the Willing because Trump has insulted all the previous members and now has few friends left.

In any case, if we want/need soya beans, we should grow our own

Sheridan may have exploded. Seeing him almost spontaneously combust on occasion when outraged beyond endurance it’s possible. Nice take on “Consigliere” Pompeo. You may be a bit optimistic about sufficient dilution the Aus population in the next couple of decades making the old alliance obsolete. An awful lot can happen in twenty years and the way things are going the whole box and dice could be down the gurgler.

Pompeo & Co have been busy bees today issuing threats to Venezuela, China & Turkey – I may have missed a few. The arrogance is breathtaking

Apart from third world countries & ones with military regimes, the USA would be one of the least desirable places in which to live – and easily the most dangerous in which to die from random gunshot. So why should Australia pay any heed to a country which, increasingly, has less to admire & almost nothing to aspire to?

Incidentally, I thought we were selling our soul for a pile of coal, not beans…

Still no shortage of americophiles in the upper echelons of the LNP/IPA coalition, and devotees of commercial TV are also still deeply in love with odious US culture, Hollywood in particular – the source of so much ugly American behaviour.