Embattled Airbnb entrepreneur has the receipts

A young, self-styled entrepreneur who owes millions to former clients in his Airbnb business has made headlines before.

Callum Forbes rises again. This week, The Australian reported on entrepreneur Callum Forbes, whose company And Chill, a kind of Tinder for property owners and Airbnb renters, went bust, leaving him owing millions to creditors. Of course, to seasoned watchers of University of Sydney student politics, Forbes is a familiar name. In 2013, Forbes earned the ignominious moniker “Callum Forges” after it was revealed he doctored receipts in a brazen, doomed effort to circumvent the spending cap during an election for the Sydney University Law Society.

Forbes got his entire ticket suspended from the election for his troubles. Less than a year later, Callum was back for more, this time running as a Liberal candidate for the University of Sydney Union Board. Forbes was ultimately disqualified from the vote for several breaches of electoral regulations, including failing to print his campaign material at Officeworks as prescribed, and using the mailing lists of the University’s Wine Society, which he was president of, to lobby for votes. After a few quiet years, during which he became a darling on the university business society speaking circuit, it would seem Forbes has emerged into the spotlight once more, this time via the national broadsheet’s business pages.

Chinese interference protest draws far right. The University of Queensland has recently become an unexpected battleground in the debate over Chinese foreign interference. Last week, pro- and anti-Hong Kong protesters came to blows on campus. Another demonstration, this time about the Chinese Communist Party’s perceived influence on campus, was heavily policed, and many Chinese students stayed home, fearing repercussions in their home country if their involvement was revealed. Still, the protest highlighted just how blurred the line between genuine critique of the CCP and yellow-peril rhetoric can get. Initially slated to address the rally was Andrew Cooper, organiser of next week’s Conservative Political Action Conference (CPAC), which promises to draw some of the world’s finest reactionary minds, including Nigel Farage, alt-right guy Raheem Kassam, and, um, Craig Kelly, to Sydney. When Cooper’s links to CPAC were noted, UQ student Drew Pavlou, one of the rally’s organisers, disinvited him, claiming he hadn’t done his homework.

TikTok content block. While we’re on the subject of Chinese influence — TikTok, the wildly popular social media app where people post videos of themselves lip syncing to pop songs, doing unfeasible sports tricks, or just actually being Mariah Carey isn’t just a revamp of Vine. It’s also, potentially, a “Huawei sized security issue“. TikTok’s 700 million or so users are sending back reams of information to its Chinese parent company, which, remember, it cannot legally refuse to share with the Chinese government. The question of influence and standards have been raised this week when Australian outlet Pedestrian‘s Brad Esposito found that his TikTok news update had been edited. Esposito’s video made a reference to civil unrest in Hong Kong over perceptions of Chinese interference and included flashes of this dramatic picture of an elderly woman confronting riot police, and was subsequently removed from the platform. 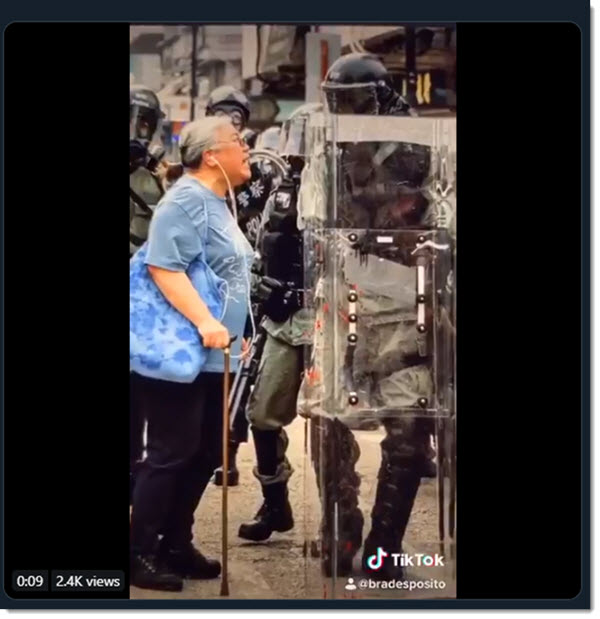 The official explanation was that the platform automatically flags and removes any content with firearms in it (which, very briefly, we can see in the hands of one of the police). A defensible policy following the horrors of Christchurch but obviously a tough one to enforce. As Esposito points out, there are several videos of firearms on TikTok that somehow escaped detection.

Trade war. What is it good for?

Callum. An excellent Liberal party candidate. He has all the qualifications. He should do well.