Crown hits back: a who’s who of the casino giant’s board

A News Corp ad blitz raises the question of who exactly is shepherding Crown through this crisis...

As recent allegations against Crown Casino have shown, the gambling industry, more than others, is porous to claims of crime and corruption. It makes sense to have the right powerbrokers in charge — a board that will be there to pull up the umbrella when a rainy day arrives.

So it is that the Herald Sun today ran a damning full-page advertorial attack by Crown Resort’s board of directors, hitting back at Nine’s story alleging links between Crown’s casino junket partners and Asian organised crime, and dubious ties between government bodies and the Crown.

“The ‘60 Minutes’ programme on Sunday night and other related articles in the Fairfax Press have unfairly attempted to damage Crown’s reputation,” the ad started, calling it a “deceitful campaign”. (Note that The Age and The Sydney Morning Herald are no longer Fairfax, but owned by Nine). It goes on to refute select elements of the investigation. 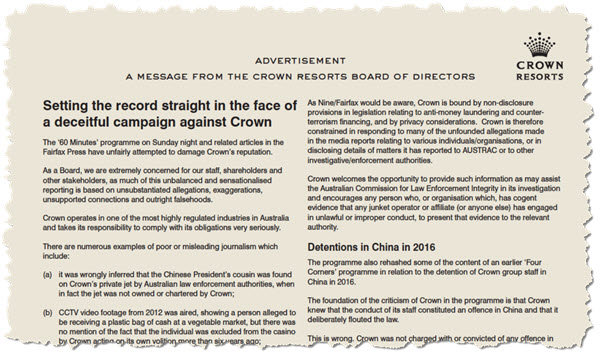 The report, which involves Nine’s TV and print resources, has spurred the government to call for an investigation into claims visas were fast-tracked for wealthy clients of the resort. Nine papers did not run the advertisements, instead choosing to run a response countering the claims made.

The ad raises the question of who exactly is shepherding Crown through this crisis.

The list of 11 Crown directors, all of whom have been approved by James Packer, is a veritable who’s who of media, business and government figures. Interestingly, at least two members of the board have a public health background. In most cases, Crown only forms one part of their CV, with many directing, chairing and sitting on many other company, government and non-profit boards.

Known as James Packer’s right-hand man, Alexander heads Crown Resorts, which has a market capital value of $8.7 billion. He was formerly the editor-in-chief of the SMH and The Australian Financial Review. The Crown website states that he is also the director of several other companies, including Seven West Media Limited. He has deep ties to the media and public relations industry, formerly an executive chairman of Consolidated Media Holdings Limited when it was acquired by News Corp. At Crown he sits on two committees: the investment committee and the responsible gaming committee.

Coonan is a former Howard cabinet minister and a former federal senator representing New South Wales from 1996 to 2007. The day she effectively resigned from senate, Crown nominated Coonan to join as a board member. She currently sits on several boards, and is the chair of the Australian Financial Complaints Authority and the Minerals Council of Australia, and is a non-executive Director of Snowy Hydro Limited. The Crown website states Coonan serves on the Corporate Council of the European Australian Business Council and the Australia-Israel Chamber of Commerce Advisory Council.

Andrew Demetriou, a former AFL player, served as CEO of AFL from 2003 to 2014. He sat on the advisory board of collapsed vocational education group Acquire Learning, reportedly making $75,100 a month and $1.6 million in shares for three days a week of work according to the ABC.

He currently co-chairs the National Basketball League, served as a non-executive chairman of waste management group Baxter Group, and served as chairman of the Australian Multicultural Advisory Council. Demetriou also sat on the Indigenous Referendum Council.

Harold Mitchell is the founder of accounting and auditing firm Mitchell & Partners, and served as an executive chairman for Aegis Media, now known as Dentsu Aegis. Mitchell served as the chairman of the Victorian Premier’s Jobs and Investment Panel. He sits on the board of The Florey Institute of Neuroscience and Mental Health, the New York Philharmonic and chairs the Australia-Indonesia Centre. He was vice-president of Tennis Australia and also chaired FreeTV Australia.

Last year Mitchell was forced to resign from Free TV because of an ongoing Federal Court case in which ASIC alleged a conflict of interest in Mitchell’s bid to secure the Australian Open for Channel Seven at a low cost.

Geoffrey Dixon is the former CEO and managing director of Qantas from 2000 to 2008, where he was the highest paid airline executive in the world, pulling in $11 million during his last year despite only having worked for five months. He then served as the chairman of government body Tourism Australia until 2014 and chaired Garvan Medical Research Foundation for 10 years until 2018.

She is currently director of Clayton Utz and the Australia and New Zealand Banking Group Limited. When she took the Crown role, Halton was criticised for sitting on the board of directors particularly after holding senior public service positions in public health.

Professor John Horvath formerly served as the Australian government’s chief medical officer from 2003 to 2009. Until 2016, he was also a medical consultant to the Commonwealth and a member of the ministerial advisory council to the minister of health. Horvath is a strategic medical advisrr to Ramsay Health Care and is a member of the International Advisory Board of the Australian Genetic Consortium.

Guy Jalland is the CEO of Consolidated Press Holdings Pty Limited, working there since 1998. He represented CPH as a director on the boards of Foxtel, Fox Sports and Consolidated Media Holdings Limited — the latter previously owned by the Packer family and sold to News Corp.

Michael Johnston was formerly a senior partner at Ernst & Young (now known as EY). Like Jalland, Johnston was also part of the board of Consolidated Press Holdings — in the role of finance director. He was previously the CEO of Ellerston Capital, a subsidiary group of CPH.

Antonia Korsanos was the CFO and company secretary of a gambling machine manufacturing company, Aristocrat Leisure Limited, from 2011 to 2018. She is also a non-executive director of Webjet Limited and Ardent Leisure Group Limited, which owns Queensland theme park Dreamworld. She previously worked at Kellogg’s Australia and New Zealand, Goodman Fielder Limited and Coopers & Lybrand (before it merged with Price Waterhouse).

John Poynton currently directs an Australian state-owned investment wealth fund, the Future Fund, headed by Peter Costello. He also chairs Strike Energy Limited, Sapien Cyber Limited and Jindalee Partners. Poynton has also sat on the boards of the Export Finance and Insurance Corporation and the Payments System Board of the Reserve Bank of Australia.

All paid up members of the Liberal Party, no doubt!!

The cream of the crop of corruption.

Recognising that every one of these flunkies is hand-picked by Packer, it does demonstrate the incestuous nature of Australia’s business elite and why that ‘elite’ is so sub-standard. All white, all rich and all Liberal Party acolytes.

I well remember Harold Mitchell claiming that all would be right with the world when the adults were put back in charge after Tony Abbott was elected.

No, really. You couldn’t make this shit up.

Crown might have rejected the 60 Minutes allegations but they cannot refute, that is disprove, them just by denying them.

Oh did I forget to mention the Home Affairs department, how remiss.

Hope the Board approved first.