If the "bring your coal to work" incidents don't convince you that question time needs a shake up, the Fatman Scoop tributes will.

The fun police are at it again, this time trying to squeeze the last drops of joy, humour and life out of the dispiriting beigeness of federal parliament, with a new inquiry threatening an overhaul of question time. A review, chaired by Queensland Liberal MP Ross Vasta, is set to consider setting time limits, clamping down on heckling and scrapping “Dorothy Dixer” questions.

Of course, there’s a fair argument to be made that question time is a bit of a farce, a source of endless negativity and an opportunity for politicians to let off a bit of steam; hitting their opponents with a string of schoolyard jibes under the protection of parliamentary privilege. There’s also an argument that it promotes the idea of politics as merely a game; a grand bit of theatre to rev up the hacks rather than something that has a profound influence on people’s real lives.

Still, it’s undeniable that question time has seen some of parliament’s most memorable moments. And so, with the understanding that question time in its current form could soon be a thing of the past and replaced with something altogether more sanitised, Crikey has rounded up some of the greatest hits, from the good, to the bad and the downright cursed.

‘I wanna do you slowly’

Of course, this article could just be the collected quotes of Paul Keating. In 1992, when asked by opposition leader John Hewson why he hadn’t called an early election, Keating delivered the withering riposte now part of Australian political folklore, “Because I wanna do you slowly”.

Keating famously gave us plenty of other gems, like the time he told the speaker to give John Howard a valium; the time he made baby noises at Hewson; and this six minute rant about cultural cringe and misplaced nostalgia for the 1950s, “the golden age when Australia stagnated”.

Where Keating was eloquent, Scott Morrison is blunt. It’s no secret the Coalition really, really loves coal. Sometimes, that love is taken to ridiculous lengths, like the time in 2017 when Morrison, then treasurer, brandished a lump of coal in question time to heckle Labor, telling the opposition not to be afraid.

In one deft stunt, Morrison managed to encapsulate his party’s smug indifference to the impending climate catastrophe. It isn’t the first time the Liberals have brought in props — in 2008, when Kevin Rudd tried to hold Friday sessions of parliament without question time, incensed Coalition MPs brought in a life-size cardboard cut out of the prime minister.

It was 2012, and no opposition leader had been booted from parliament since John Howard 25 years earlier. Unsurprisingly, it was Tony Abbott, whose time as opposition leader was marked by a relentless campaign of pugilistic negativity, who broke that streak.

Abbott was asked by the speaker to withdraw a statement accusing Gillard of lying, without qualification. Abbott withdrew his statement and, in the same breath, provided a qualification and was binned for his efforts. It was a fiery day in the chamber, with Coalition MPs George Christensen, Joe Hockey, Christopher Pyne and Peter Dutton all suffering the same fate as Abbott.

A bizarre moment occurred in 2013 when both then-prime minister Tony Abbott and opposition leader Bill Shorten were overseas, leaving the Nationals’ Warren Truss briefly in charge of the country, and giving us this iconic photo from Andrew Meares showing the Labor frontbench looking like they lost their LBW appeal but used their last review an over ago. 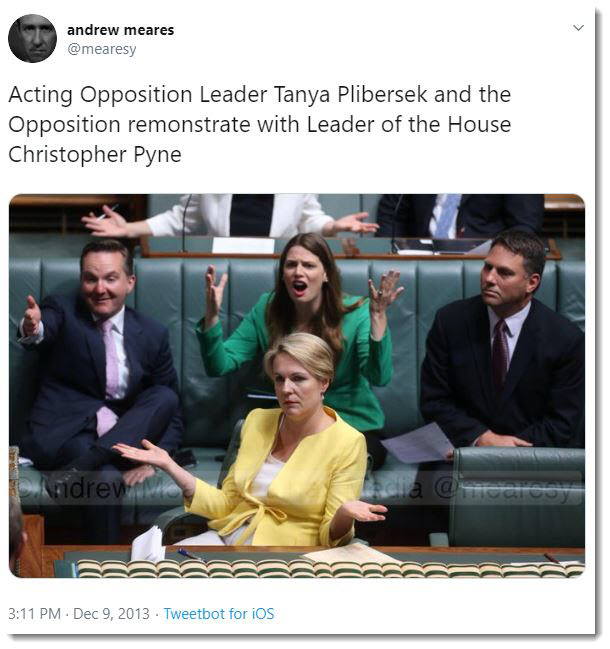 Christopher Pyne may or may not have called then-opposition leader Bill Shorten a “cunt” while in the heat of battle. Pyne’s office claims he had muttered the phrase “you’re such a grub” under his breath. Others swear they heard the c-word. Watch the video and decide for yourself.

Less than a month into the prime ministership, Scott Morrison posted a video on Twitter of Coalition MPs in question time putting their hands up accompanied by the dulcet tones of rapper Fatman Scoop’s 1999 club banger “Be Faithful”. Of course, Fatman Scoop goes on to rap the words “who fuckin’ tonight?” several times throughout the track. Family-man Morrison quickly deleted the tweet. But of course the internet never forgets.

Have an idea on how to fix question time? Remember any other inspiring moments of debate? Let us know your thoughts at [email protected].

Question time is a farce. Most MPs treat it as if they were auditioning for a reality TV show. They know it’s the only bit of parliament that will get on the evening news.

Most opposition questions: “will the prime minister kindly mislead the house, throw a minister under a bus, or at the very least contradict himself so we can all shout and carry on for a bit?”

Most speakers are complicit in this charade and allow ministers to ramble at length, often irrelevantly, and these days usually in Abbott-esque fashion attacking their pet dislike du jour.

We need independent speakers who are not beholden to any party, to administer some discipline to these recalcitrant school children. The speaker must be the adult in the room, seeing as the MPs cannot manage to adopt this seemingly basic attribute of being an MP.

I think all of the above, including Keating’s unaccountably popular childish insults, demonstrate the schoolyard pointlessness of Question Time. It is not that Question Time must inevitably be pointless. If our overpaid unrepresentative representatives did their job in the adult way we pay them for, Question Time could be the informative session it should be. But it seldom is.

One of my all time favourites.Mr.Eddie Ward, member for East Sydney, (Labor).My question is directed to the prime minister, Mr.Menzies.Following the publication of the book by Genrral Willoughby, will the prime minister now admit there was a Brisbane Line?Mr .Menzies in reply, It is well known that the member for East Sydney is a past master in misrepresentation.Eddie Ward, Now answer the question.

It is all in the Standing Orders – until they are changed in a bi-partisan coff-coff manner, to require Answers to be relevance or even, a wild idea, actually answering the question?

Christopher Pyne at his slimiest. What a disgrace that person is, but still bucking the system.

and getting away with it.