The real, enduring conspiracy behind the murders of Tupac and Biggie

Following Tupac and Biggie's deaths, scores of suspects and witnesses were killed and rumours immediately billowed out like smoke. Why do these conspiracy theories hold so much sway?

It’s a bracing Saturday night and there are about 150 people in Melbourne’s Croxton Bandroom eager to hear about murder — specifically the murders of rappers Tupac Shakur and Biggie Smalls.

It’s an agreeably shambolic event. Greg Kading, a 22-year LAPD veteran who was lead detective on the taskforce that investigated the murders, is currently touring Australia with former gang member and Death Row record label associate Mob James. And it says a lot about the enduring appeal of the rappers and the endurance of conspiracy theories surrounding them that this, “A Night With Greg Kading”, can go on a nation-wide tour at all. Kading is sharing the details of the investigation he says solved the enduring mystery of who killed Tupac and Biggie, and why.

The crowd is largely white, between 35 and 55, more working class than hipster: hoodies, goatees, caps inside and labret piercings. It’s a group that would look equally at home if the event concerned Metallica. You wonder if Biggie and Pac are maybe the only rappers they like. Regardless, something in this story brought them here, 23 years later, to hear answers with fellow obsessives. 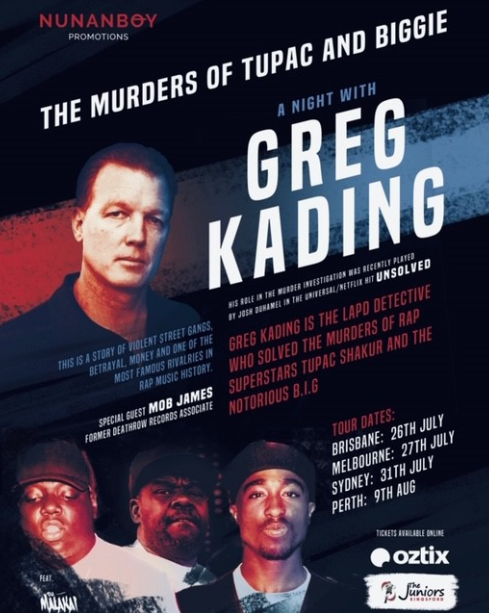 Shakur was the Shakespeare-loving child of Black Panther revolutionaries. He ended up in Oakland, where he fused his black liberation politics and detailed storytelling to nervous, neon-tinged funk. He developed into perhaps the hip hop icon; equally animated by politics and partying, humanism and thuggish posturing. In 1995 he signed with Death Row Records, run by a bear-like ex-football player called Suge Knight. Around the time Shakur signed, Knight was filling the ranks of Death Row with members of the Bloods street gang.

Biggie was born Christopher Wallace, to a Jamaican-American school teacher in Brooklyn. Growing up, he sold drugs and easily won street corner rap battles. He signed with Bad Boy entertainment, run by aspiring mogul Sean “Puffy” Combs. Together they melded his dense but smooth rhymes with candy-coloured 1980s R&B beats. He conquered the mainstream, re-wrote the rules of rap, and lost not an ounce of street cred.

The pair were friendly until Shakur was shot and hospitalised in 1994, and blamed Biggie. Reprisals followed and the rivalry between labels grew volatile. Combs turned to the Crips — another LA gang, natural enemies of the Blood-affiliated Death Row — for protection whenever Bad Boy traveled West.

Rundle: in a parking lot, the beginning of grunge, the end of rock, and above all, Cobain

On September 7, 1996, in Las Vegas, Shakur took four bullets in a drive-by shooting, and died six days later. The next March, Biggie, visiting LA, was also shot four times in a drive-by. He was dead before he reached the hospital. Countless conspiracy theories followed.

At the event, Kading starts by addressing these theories, while running through a breezy PowerPoint summarising his investigation. He then interviews James about the latter’s time at Death Row. They make a charming pair, not glossing over their fundamental differences, but displaying mutual respect and affection.

Finally, a Q and A. It goes as long as people have questions, which is a long time. I had thought it was “he touched the hem of his garment” appeal that had scores of people to lining up to be photographed with James. But the questions betray an intimate knowledge of the case. These guys knew who Mob James was. Whatever else it was — suburban guys chucking the deuce for a picture next to a former gang member — the night was achingly sincere.

The final question sums it up — James is halfway off stage when a nervous, rambling question about Tupac’s mental state the night he died blurts from the crowd. The event has been going for more than four hours, but James listens to the whole thing and answers with a smile.

Following Tupac and Biggie’s deaths, scores of suspects and witnesses were killed and rumours immediately billowed out like smoke. One theory followed that the LAPD had been directly involved in the killings, which in turn led to a $400 million lawsuit against the LAPD by Wallace’s family. It was about this time, in 2006, that Kading took over the case.

This narrative collapses under scrutiny. Kading concludes that the icons were killed by two gang nobodies, culminations of opportunism, revenge and the promise of money from powerful figures at the respective labels. Both killers were eventually murdered themselves.

Kading’s final report was convincing enough to ward off the lawsuit, which was withdrawn in 2010. As far as the LAPD were concerned, that was that. The taskforce was disbanded without one arrest being made. Kading quit in protest and wrote a book. He is still talking about it eight years later, because “these lives had value”. He’s not just talking about the famous victims.

Rappers and their fans are inveterate conspiracy theorists at the best of times. The “Illuminati” is only the biggest, recurring throughout the last 25 years of hip hop culture. But rappers frequently spread smaller theories about, say, the CIA murdering Bob Marley, or the government releasing weaponised ticks.

There is even a school of thought that gangsta rap is itself a conspiracy, cooked up by private prison owners to tempt black kids into a life of crime. As Complex points out, the exact opposite is true. The material conditions of racist policies, enforcement and mass incarceration produced the culture, not the other way round. And as sexy as we find gang murders, rappers just as frequently die young from systemic problems — chronic health issues, addiction to painkillers, and all manner of self-medication. It’s implicit in the name Death Row: the outlaw doesn’t get away. One way or another, you die at the hands of the state.

Mob James tells us there were 21 murders — including his brother — in the aftermath of September 1996, and not one has been solved. As Kading says, most gang related murders never are. The conspiracy is in plain sight.

The topic is as fascinating as watching grass grow. I knew Crikey was upping the investitive schtick but had no idea you were upping and downing at the same time.

Thanks, Crikey, for indulging the cultural fascinations of those of us who fall awkwardly between Gen X and the millennials. Curious how deeply felt the myths of my generation are – and the fictions are as revealing as the facts.