Vale Graham Freudenberg, herald of the promise of Labor

As that generation departs, it would be worth looking back at the words this man wrote, and for Labor to discover the lost art of telling us what it is all for.

Who writes the words to read over the grave, and tell us what it was all for, when the speechwriter goes?

Graham “Freudy” Freudenberg is the latest of the Whitlam generation to go, departed at 85, a year after the documentary The Scribe picked out his unique contribution to those anni mirabiles. Best known for his work bringing Gough Whitlam’s words into truth — a job of constraining rather than filling out Whitlam’s vision, running as it did from the Gracchi of Rome to FDR by way of the Glorious Revolution — he worked also for Bob Hawke as PM, Neville Wran as NSW premier and a host of others, producing well over a thousand speeches.

He began writing for Arthur Calwell, which is like having written for Keir Hardie, coming out of the last years of clear and simple class struggle now sealed off from us in newsprint and black and white film. He always delivered, those who relied on him said, but not without terrifying people first — leaving it until the evening before to write all night.

Like many at the head of the movement at that time, he was intoxicated with a love of high romantic classical music, blasting out Beethoven as he wrote, on successively better hi-fi systems over the decades. Having started as a journalist, he wrote to express the thoughts such as they were, and the personality of the politician in question, but he was not without his own views — publishing a new treatment of the relationship between Churchill and Australia.

“We have heard the chimes of midnight,” Freudenberg said in the wake of the ’77 election, speaking for many. But he went on, and it was a pretty good life; an ascension with the century.

Freudenberg lived across the era when the collectivist and conservative Labor Party became attractive to young intellectual men and women coming out of childhoods shadowed by WWII, by “The War”, the great struggle of human possibility against radical evil. They joined a party less “progressive” in a number of areas than elements of the new Liberal Party. By the time they retired a whole progressive class had followed them in, and the party had become a social coalition.

It becomes clearer with each passing year that the great post-war liberal-progressive-social-democrat push had taken its energy from the war’s epic struggle and the foregrounding of the question of what it was to be human, of what was at stake. As the gravity of that event weakened by distance in time, a vacuum formed, and into it rushed the beguiling and annihilating power of the market.

The Hawke government can be seen as something of an accommodation of the two processes; under Keating the floodgates opened. The purpose of Labor became not merely a better world, but what its likely voters most immediately wanted. It’s good to give voters what they want, but if you offer them only that, then you enter a spiral — and one not pointing upwards — chasing the contradictory demands of a now fragmented base.

Witness, for example, the mess Labor has got itself into with its simple inability to argue for a rise in Newstart on the grounds that no consideration of rorting should dissuade such a party from saying that people should not have to half-live like animals, which on Newstart they half-must.

There’s no point in damning the present through the past, not least because the Whitlam pushers were damned, at the time, as fey successors to the hard men of an earlier era. The times create the men and women; to be offered the chance to be great is impossible without a degree of luck.

Still and all, as that generation departs, it would be worth looking back at the words this man wrote, and for Labor to discover the lost art of telling us what it is all for.

Debate: should Quentin Bryce have to step aside? 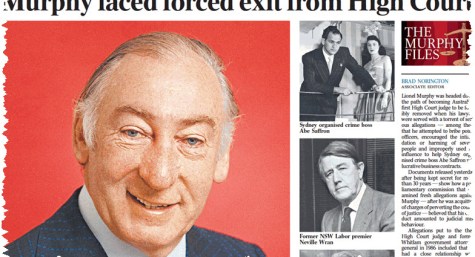 Rundle: Lionel Murphy fought for equality, and was pursued obsessively by those who hated him

Another way to consider this is that words are cheep-cheep.
Those who can craft them agreeably do so at the cost of meaning, eg “constraining” Great Gough, and thus we end up with the thin gruel of AA.

As always the trimmers & tackers, the enablers & the toadies, stymie all that is good for fear of their essential worthlessness becoming apparent and the punters realising that they are not just a waste of space but an abomination.

Freudenberg was a great wordsmith and could fire up the imagination. Goes to show but, deeds not words reveal the truthiness.

What Labor was missing at the last election was a story teller to provide a cohesive vision of a better future. Writers like Freudenberg are essential to get an understandable picture to voters.

In the era of the nine-second grab & the 140 character tweet the writing skills for an effective speech are fast being lost. Freudenberg et al are no longer around to remind us of what we once had.

We are communicating more but the content is daily minutiae & general dreck.

Glad you didn’t let his passing go without comment Guy. He was a craftsman.

Indeed Labor did need a narrative to take to the last election. All policy, no narrative, makes Bill a dull boy.

It wasn’t just words AR, it was a story. At heart, this is humanity, story tellers. All our history, all our present, just stories.

Freudenberg knew that to his core.

The Labor Party was going to give Freudenberg a seat in the NSW Legislative Council but Graham Richardson had a more important candidate for that position: Eddy Obeid.

That reminder is a good start to the month. Ta.

In my home library I have a treasured book, a collection of Ben Chifley’s speeches called Things Worth Fighting For.the insight and the pure love he had for the Labor movement shines through in every paragraph. The point I am trying to make is, Ben wasn’t a vrry good public speaker because he had a gravely voice, but the contents of his speeches were pure gold.one in particular I remember is Help Britain To Win Through.this was an explanation as to why petrol rationing had to be maintained, due to the dollar shortage and other factors, but its message and content was lost on the electorate who just didn’t want to know or listen.i was 10 years old at the time and I still remember my mother’s tears on that Sunday morning in 1949 when I brought in the morning paper.when I asked her why she was crying, all she said was,”They’ve beaten Mr.Chifley”.I rest my case.