Johnson draws line in the sand over Irish border

Good morning, early birds. Boris Johnson's offensive on Brexit negotiations has hit a roadblock in Ireland, and Labor calls for the government to end Centrelink's maligned "robodebt" system. It's the news you need to know, with Rachel Withers.

UK prime minister Boris Johnson is refusing to meet with EU leaders unless they scrap the Irish border backstop, as he continues to push for a new and improved Brexit deal, The Guardian reports

German chancellor Angela Merkel and French president Emmanuel Macron have both invited Johnson to meet, but Johnson says there is no point in holding talks unless the EU agrees to reopen the discussions.

Johnson has reportedly been slow to contact Irish Prime Minister Leo Varadkar, who is adamant that the backstop remains, preventing a hard border between Northern Ireland and the Republic of Ireland. EU officials, meanwhile, have rejected Secretary of State Dominic Raab’s claim that negotiating a free-trade deal would be “easier” following a no-deal Brexit, and the pound has dropped to the lowest level in two years amid no-deal Brexit rhetoric.

Labor is calling for Centrelink’s “robodebt” recovery program to be scrapped, after 7.30 reported the story of Centrelink pursuing the debt of a disability pensioner who had died.

According to 7.30, Anastasia McCardel was contacted by a Centrelink officer about a debt of nearly $7,000 owed by her son Bruce, six months after his death. Opposition spokesman Bill Shorten said the story should shame Government Services Minister Stuart Robert into action, accusing the debt recovery program is causing a “trail of human heartache”. Robert is standing by the policy, saying the department has a “legal responsibility” to recover overpayments, and defending the practice of recovering debts from the estates of dead people.

Andrew Ure reportedly worked at least once for Zhou, a suspected money launderer, who Nine previously revealed had worked with Crown to lure Chinese high rollers down under. Ure flew with Zhou to Vanuatu in 2017, on the same plane as Crown “VVIP” Ming Chai, cousin of Chinese president Xi Jinping. Crown also arranged for Victorian police officer Greg Leather to work for Zhou whilst suspended and under investigation. Victorian Police says it intends to investigate the claim.

Certainly [my husband] and I took the Howard/Costello baby bonus initiative a bit too literally — we had one to replace each of us, one for the country and even one for the Liberal Party.

The new member for Higgins uses her maiden speech to responds to the 1943 maiden speech of Enid Lyons, the first woman elected to the House of Representatives.

Courier-Mail story attacking scientists over Adani mine not accurate or fair, watchdog says

‘No mate, no’: Court officer pleaded for accused killer to stop attacking woman

Aussies no better off since GFC: household incomes stagnant for past decade ($) 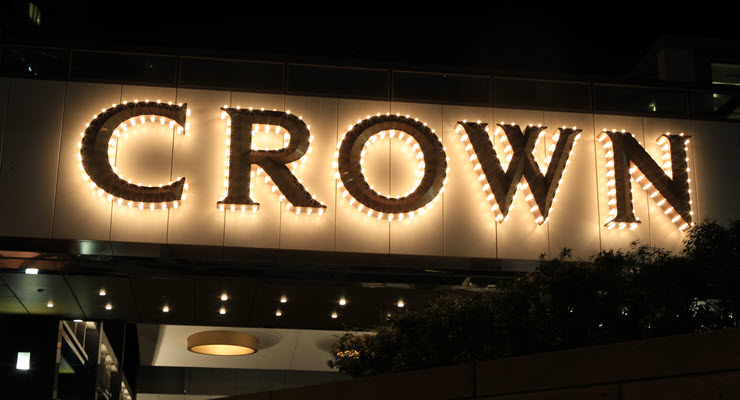 “Packer would be well-advised to get out of Crown (or at least get off his luxury yacht). However, handing control of Crown to Lawrence Ho is not the answer either. For mine, the best way to limit the power of both men would be for the NSW, Victorian and WA government to agree on the introduction of a maximum shareholding provision of 15%, which comes with a maximum of one seat on the board. They should also push for a complete overhaul of the Crown board and senior management ranks so that the new leadership of the company are not tainted by events of the past. The problem Crown’s existing board and management team has got right now is that none of this looks good and they don’t know what Nick McKenzie’s team will hit them with next.”

“The damage being inflicted in the economy and on society by the dominance of Facebook and Google can only be addressed by reversing what created it — not their innovation or brilliance at monetising our lemming-like consumer behaviour, but their relentless acquisition of potential rivals to widen the moat. That was the lesson from the Gilded Age, and the trust-busting power that emerged from it for US regulators to use against monopolies and duopolies. It’s a lesson more and more politicians on both sides of the aisle in the US are discussing. The ACCC — as its role in the electricity debate, where the Coalition wanted the power to break up companies and the ACCC didn’t, showed — is reluctant to go near a break-up power. But it’s an issue that’s relevant not merely to energy, or big tech, but right across an economy where we’re picking up the pieces in the aftermath of neoliberalism.”

“If nothing else, Newspoll — or more precisely, YouGov Galaxy, the pollster behind the Newspoll brand — has once again signalled its market leadership by being the first to put its head above the parapet. Should its rivals record similar results when they return to the fray, the suspicion will persist that they are herding to Newspoll, as they appeared to do to disastrous effect at the election. However, that doesn’t resolve the difficulty of evaluating Newspoll’s finding that the government only now holds a clear lead, after it was never once so credited through the entire three years of the previous parliamentary term.”

Emma Husar’s career is dead – it’s right to hold an inquest – Jenna Price (The Age/Sydney Morning Herald): “Amid all this, there are good lessons and bad news in this story. The worst news is three months out from the election, Husar has no serious job prospects. I’d argue the Labor Party, instrumental in the downfall of its one-time star, has a responsibility to Husar, no matter how it feels about her behaviour either before, during or since her term of office. It failed her. Too many of us journalists also failed her. Too many were so caught up with the gotcha moment, they weren’t fair. Even those of us who didn’t write about the story were prone to the odd wink-wink-nudge-nudge. We let Joyce off more lightly even though we had the receipts, as baby photos are sometimes called.”

Barnaby Joyce is the problem that won’t go away ($) – David Mills (The Daily Telegraph): “Barnaby reportedly decided to reveal the depths of his penury to argue for an increase to the Newstart allowance, saying his own circumstances had given him an insight into the, “thousands … doing it much tougher than me”. That’s all fine and well, but is there any aspect of his private life that the Australian public is not aware of now? Is there anything he will not share?”

Watchdog’s duties may double ($) – Telecommunications Industry Ombudsman Judi Jones (The Australian): “Digital platforms present unique challenges that will require­ considered legislative, industry and regulatory changes. Handling escalated complaints about these services is a natural extension of the industry-based ombudsman model, and lever­ages its expertise in applying consumer law and industry codes of practice. The model has the benefit of a sound framework and robust systems and processes for handling complaints about losses suffered­ from relying on these services. A significant benefit of an industry­-based ombudsman scheme is that it can make determinations based on what is fair and reasonable in the circumstances, including, for example, requiring the digital platform to take action when a consumer has been wronged.”