The coverage of the Shayna Jack scandal proves there are often just two options for Australian tabloids: 'heartache and sadness' or 'crime and punishment'.

On Saturday night, Australian swimmer Shayna Jack announced that she had tested positive for a banned substance before pulling out of the 2019 World Aquatics Championships.

The Australian Sports Anti-Doping Authority (ASADA) had discovered the substance Ligandrol during an out-of-competition test on June 26 and provisionally suspended Jack, although she and Swimming Australia had previously cited “personal reasons” for her no-show in South Korea.

The 20-year-old swimmer maintains her innocence, arguing in an Instagram post that she did not take the substance knowingly, and ASADA is still investigating the matter. The story has a million different angles, and you can bet that in the 48 hours since the new broke Australian media ran with them all.

Straight off the bat, ABC — and to a lesser extent AAP — has already covered most conceivable angles with a noted evenhandedness. The national broadcaster covered the news as it broke from Saturday night, including Jack’s initial Instagram post; responses from Swimming Australia and Jack’s teammates; Australian swimmer Mack Horton’s protest at the championships over Sun Yang’s doping case; and the likelihood that ASADA’s investigation will mean the swimmer misses next year’s Olympic Games in Tokyo.

The ABC went on to cover *deep breath* accusations from former ASADA chief Richard Ings that Swimming Australia tried to cover up Jack’s positive test, including Swimming Australia’s defence that internal drug policies mandate details be kept confidential; Horton’s announcement that the case does not change his feelings on doping in sport post-Sun; and Jack’s secondary statement about the drug itself, a muscle growth substance commonly used to treat osteoporosis, including the intimation that the drug can be found in contaminated supplements.

In an analysis piece, Tracey Holmes also examined Australian hypocrisy on the matter — specifically Australia’s eagerness to condemn Chinese swimmers like Sun, but provide Jack a “fair process”. That line of thought was then picked up at other outlets.

The Project also ran with the “Aussie hypocrisy” angle last night. In an interview on the show, Richard Ings was again eager to highlight that, while doping rules apply across the board, Australian swimmers and the media are happy to dismiss explanations from Russian or Chinese athletes testing positive, but “if it’s an Australian athlete, the headlines are all heartache and sadness”.

The interview also drilled down into Jack’s primary defence that she did not take the drug knowingly. Ing said it was an argument he’s heard on every anti-doping case he’s ever worked on.

After one of our swimmers took a stand on doping, it turns out we’ve been chucking rocks from inside of a big ol’ glass house. Do you think Australians have double standards when it comes to doping?

Compare and contrast with Today. Channel Nine’s morning show foregrounded that “heartache and sadness” angle with accounts of Jack “falling to her knees” and preparation for Friday’s meeting with ASADA that could lead to everything from a four-month to lifetime ban.

Sunrise similarly ran with Jack’s battle to “clear her name” and investigate how the drugs entered her system. The show also went in hard on a Swimming Australia representative over allegations of a “cover up” in holding the information back for 10 days.

Conversely, we have The Daily Telegraph declaring Jack’s incident a “day of shame” and highlighting Swimming Australia “blaming” Jack for their delay in going public.

Yesterday’s Courier-Mail went the exact opposite route, highlighting Jack’s defense claim. The Sydney Morning Herald and The Australian went for a slightly softer version of each, with the former offering Jack looking pensive and “baffled” over the incident, and the latter publishing an explainer on “the muscle drug that sunk Aussie swim star”. 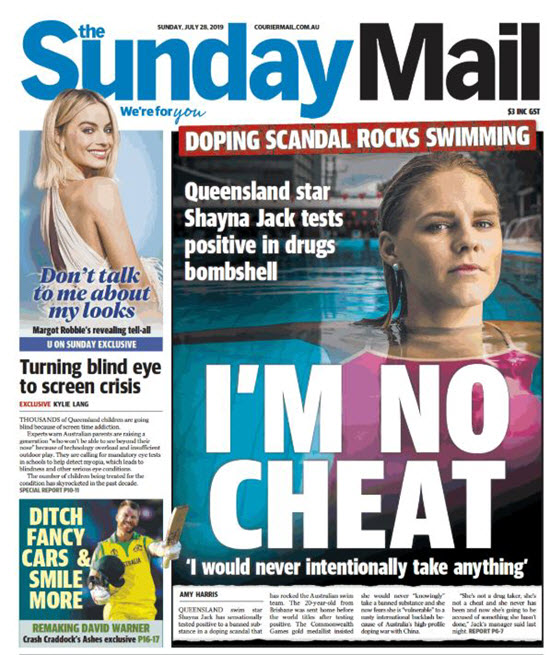 News.com.au likely went the hardest running with multiple critics accusing Swimming Australia of cover ups and unpacking the body’s confidentiality excuse. The website also featured FINA executive director Cornel Marculescu accusing Horton of primarily having “personal issues” with Sun Yang rather than anything to do with doping, while also suggesting Jack isn’t the only swimmer under investigation for doping.

While none of these angles are wholly inaccurate — as the ABC demonstrated, there are at least half-a-dozen relevant arguments to be made — picking headlines means picking one side and running with it. And if it’s not “heartache and sadness” across an Australian tabloid, you’d best believe it’s “crime and punishment”.

The difference is FINA are cowards and China has a history of systemic doping but is never called out. Our swimmers may not be all clean, but they ain’t swimming while under investigation either.

The difference between Jack & Sun is that the former has been front page news and has been sent home in disgrace. The latter had his initial penalty for doping kept quiet for over 7 months and only revealed after the Asian Games. His subsequent run-in with authorities ended up with a hammer and a broken sample vial. Yes there is a marked difference.

Hearing this twenty year old refer to “her manager” the other day was revelatory. These people are really functioning in a business and the rewards and temptations can be great. Nothing amateur anymore. The lure of filthy lucre and fame, even infamy is what it’s about.

Well, unlike Shane Warne & Signor Caravani she ain’t blaming her mum.
Yet.

Apart from for the name, presumably. Poor kid never stood a chance.