Boundlessly inquisitive, quietly political and full of sass, Margaret Fulton saw life as an adventure and wanted to bring everyone along for the ride.

It’s been quite the week for celebrity foodies.

First, George Calombaris was ordered to pay a $200,000 “contrition payment” for underpaying employees of his restaurant empire by a combined $7.8 million, a punishment condemned by many as far too light. Then it was announced that he and his fellow judges, Gary Mehigan and Matt Preston, had quit the show after 11 seasons when their demands of a 40% pay rise weren’t met.

Our thoughts and prayers are with the three very rich men in this difficult time.

And then, mere hours after the season finale, as we were getting used to the idea of a cravat-less MasterChef and celebrating that 22-year-old Larissa Takchi had become the youngest ever winner of the cooking competition, tragedy struck. Margaret Fulton, Australia’s original celebrity foodie had died, aged 94.

Born in Scotland in 1924, Fulton came to Australia with her parents and five siblings aged three and settled in Glenn Innes NSW. The family struggled through the Depression and in 1942, aged 18, Margaret moved to Sydney with dreams of being a fashion designer or showgirl.

But soon after taking a “boring” job as a clerk at AGL, she was transferred to the company’s cookery division and it was there she discovered her true passion: food.

Margaret Fulton’s CV is too long to list, but she went on to become a copywriter, food writer, cook, journalist, teacher and even MasterChef guest judge. She wrote more than 20 cookbooks, the most popular of which, The Margaret Fulton Cookbook, has sold over 1.5 million copies since its release in 1968 and is an Australian household staple. I’m looking at my mum’s worn copy on my bookshelf right now. 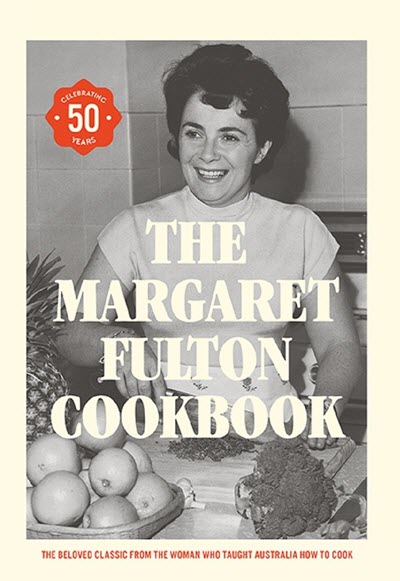 “I think Australians responded to this enormous excitement that I was feeling about food and they were feeling it too,” she said in a 1997 TV interview.

Fulton’s love of travel took her all over the world and inspired her to introduce Australian home cooks — accustomed to a consistent diet of meat and three veg — to recipes from Italy, France, Greece, Spain, India and China. Through food, she advocated for multiculturalism and helped shape the culinary identity of Australia.

Small in stature but reportedly large in presence, the self-described “slightly radical feminist” changed the way Australians cook, eat and think about food. Her contribution to the nation’s culture was officially recognised in 1983 when she was awarded a Medal of the Order of Australia for “service to the media as a journalist and writer in the field of cookery”.

In 2006, The Bulletin counted Margaret Fulton amongst the 100 most influential Australians, writing that she had “turned us into foodies” and labelling her “Australia’s original domestic goddess”.

Like the total badass she was, the goddess kept working well past retirement age. Passionate about education of all kinds, she told The Australian Women’s Weekly in 2009 that, “Scarcely a week passes when I’m not invited to speak at a food industry or fundraising function and I always try to accept. At my age, being asked to pass on what I’ve learned is a pleasure and a privilege”.

The prolific slashie (cook/author/journalist/legend) truly loved what she did, a perk that most people in the world don’t enjoy and that others take for granted. “The best thing in life is working and writing recipes,” she said. “And chopping and stirring and all of those things”.

She was a class act, a far cry from many of the fame-hungry food stars of today. Boundlessly inquisitive, quietly political and full of sass, she saw life as an adventure and wanted to bring everyone along for the ride. And her wry sense of humour helped endear her to all she met.

“I think part of the thing that women liked about my recipes was that I would get them doing the maddest things,” Fulton told the Sydney Morning Herald in 2009. “I always think of myself as Toad [from Wind in the Willows] — getting into my car and going on a wild ride and everyone coming with me and quite enjoying it, you know, because sometimes I’d give them the daftest recipes.”

“Early this morning our family lost our most treasured, inspirational and loving mother and grandmother, Margaret Fulton. Our hearts are too broken to respond to your messages right now, but we’re deeply grateful for your love and support.”

I hope Larissa Takchi has tipped her chef’s hat to the woman who paved the way for her and countless others to turn their love of food into careers. And perhaps George Calombaris can take a leaf or seven out of her multiple books too.

Vale to a national treasure, to a feminist icon, to the ultimate master chef.

How do you think food culture has changed since Margaret Fulton’s heyday? Send your comments to [email protected]. Please include your full name.