Forget boat people, ‘refugees’ arriving at airports are gaming the system on a grand scale

While politicians and the media focus on people arriving by boat, asylum seekers are entering the country by plane in massive numbers — and the system can't keep up.

The man sitting opposite us says he has found happiness. He lives in a small rented room in an outer Sydney suburb. He works a 60-hour week in a low-paid maintenance job from which he could be fired at any minute. He travels three hours a day on trains and buses to get there. He has no Medicare cover should he get sick. And it’s a whole lot better than where he came from.

We’ll call him Raymond (we can’t use his real name, for reasons which will become obvious). He arrived at an Australian airport from Malaysia four years ago on a tourist visa. Within a month he applied for refugee status. His claim — that he feared religious persecution back home — was not believed by assessors from the Department of Home Affairs. He lodged an appeal against the department’s decision, as is his right. But more than two years later he still doesn’t have a hearing date. The odds are that his appeal will fail, but in the meantime he’s got the protection of a bridging visa. This means he can remain in Australia and work until his legal avenues run out.

Raymond’s is one of more than 20,000 cases listed as “active” at the Administrative Appeals Tribunal (AAT). The tribunal puts its clearance rate of refugee cases at 38%. A year ago there were 14,000 cases. Since then, the appeals have poured into the tribunal at the rate of around 200 new cases every week. And the more cases there are, the longer it takes to clear them.

Gaming the system has proven remarkably simple in a country that proudly parades its “tough-on-borders” credentials to the world. Raymond is happy to show INQ how it’s done. He opens his phone and taps into a private Facebook group run by a man called Jebat Joe, a Malaysian national who oversees the Australian end of a labour recruitment syndicate. 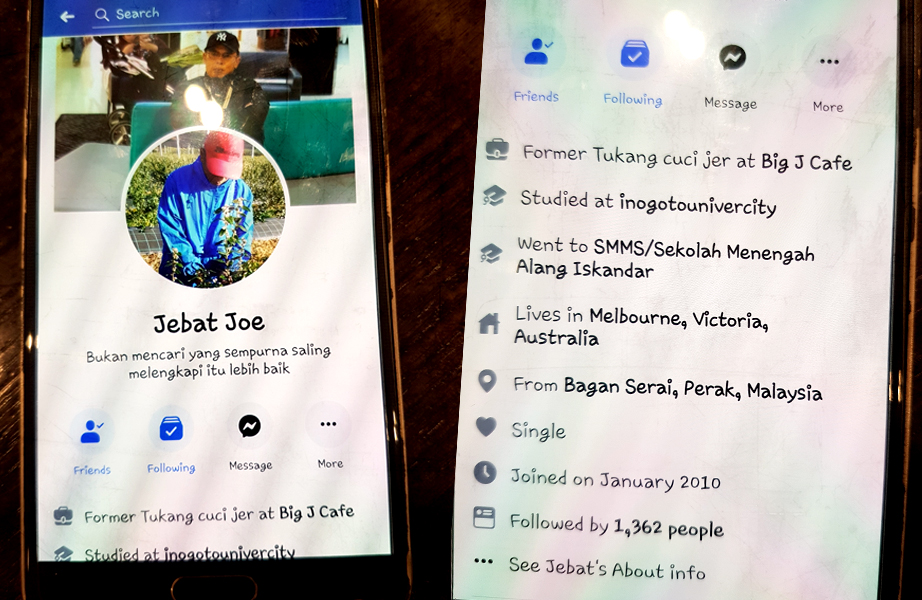 Jebat Joe has nine tips on how to get through customs for anyone who arrives on a tourist visa at an Australian airport and hopes to stay permanently:

Jebat Joe underlines the importance of appearance. A major reason people don’t get into Australia is that they “don’t have good clothes”. Ladies, he said, should “dress like a diva”.

Jebat Joe is part of a larger system that has paved the way — at a price — for thousands of Malaysians to make money in Australia, a step taken more often than not out of necessity.

Next, Raymond shows INQ the online site of a man known as Zed, who worked in Australia but has returned to Malaysia. Zed works alongside Jebat Joe to recruit Malaysians looking for work in Australia. Anyone seeking a job must pay a minimum fee of $300. In Australia, Jebat Joe’s operation does deals with contractors who are looking for workers, and his operation takes a percentage of the total labour cost. It’s a scheme that mostly operates through closed Facebook or WhatsApp groups. 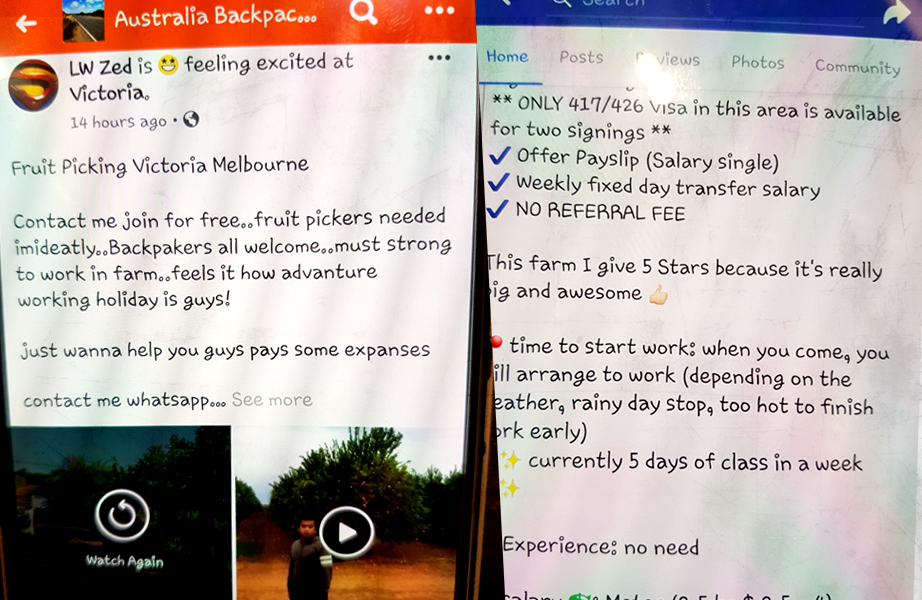 Raymond has gleaned his knowledge from job notices posted on sites like “Kerja di Australia” (“Work in Australia”). At the time of writing, the website has a callout for blueberry picking jobs in Coffs Harbour.

Raymond has a wide circle of Malaysian friends who, like him, entered on a tourist visa. Most have made a living working on Australian farms while, like Raymond, they wait for the system to decide on their refugee application. For those working on a farm there’s a strict protocol, he says. “They don’t talk to the farmer, and the farmer does not talk to them,” explained Raymond. “The farmer only deals with the [labour] contractor.”

In the world of Malaysian farm labourers, the contractor — who might be Malaysian but equally could be Indonesian, Chinese, or Lebanese — holds the whip hand, according to Raymond. Workers are paid in cash, usually every two weeks.

The Malaysian visa scam began on a small scale but escalated five years ago and is controlled by syndicates in Malaysia. In Australia, gaming the system relies on a legal framework that guarantees a fair hearing for anyone with a claim for asylum. At the centre of that system is the AAT, which has been driven to a state of virtual meltdown. These are the numbers:

Those statistics sound horrific, but the long waiting times are very good for business. Abul Rizvi, a former deputy secretary of the Immigration Department, says this state of dysfunction is exactly what labour-hire syndicates need: “It’s not much use bringing a worker out to Australia and only having them for a week. They need a worker to stay for years to keep making money from them,” he told INQ.

“The beauty of it, is that it is completely legal for those on a bridging visa to work,” Rizvi explained. “The visa system, and by implication our borders, have never been so out of control.”

The AAT tries hard to present a personable face. Its waiting area is a pastiche of comforting blues, greys and wood tones. Furnishings are soft. Edges are rounded. Carpet takes the edge off any sharp sounds. There are open areas for families. Small niches for confidential chats. Closed door rooms for those receiving bad news.

On the day INQ visits, a cheerful young tribunal officer emerges from behind the reception desk with armfuls of books and toys to keep the children of a Bangladeshi family entertained. The AAT might be a judicial body, but it seems the very opposite of imposing bureaucracy.

Within the AAT system there’s a special place for people seeking asylum, or as it is officially known, a “protection visa”. Every applicant’s case is confidential. In the daily register, asylum cases are anonymous. The only clue is a figure who might emerge briefly from a lift and disappear quietly into an unmarked hearing room.

Reporters can attend most AAT hearings, but not asylum cases. When the AAT issues its final decision, there’s nothing to identify the applicant: no name, date of birth or family details. The system offers total and complete anonymity, geared for those — and their families back home — who face torture or death, among other threats.

Last year, the AAT found that only 5% of cases were indeed genuine refugees. Lawyer Simon Jeans — who knows how the visa appeal system works from the inside after spending five years hearing and ruling on refugee claims at the Migration Review Tribunal (since merged with the AAT), and before that 20 years working alongside asylum seekers from Vietnam, Iraq and Iran, to name a few — says you can sniff when a claim is false.

“It’s quite easy to identify,” he said. “You ask a question like ‘tell me about why you left your country’ and you get a very vague answer. There’s lots of that in the system. I think I had a rejection rate of about 90%. It was dispiriting. It was very hard to find a refugee.”

Jeans uses an insider’s term for those who claim asylum after arriving at Australia’s airports: “Jumbo people” (as in the 747, to distinguish them from the boat people). And the hallmarks of a dodgy claim are, to him, obvious. “The Malaysians have a pro forma system because they have agents helping them. So they put in the same claims. They usually say they’re the victim of a loan shark (back in Malaysia) or they are homosexual.” Jeans explained that the fear of violence at the hands of a loan shark became a popular argument after a tribunal member ruled in favour of it in one case.

“The applicants have the same address for correspondence, which is used by the organised groups behind it.  So it becomes obvious when you’ve got large numbers all apparently at the same PO box.” What’s more, said Jeans, Malaysian applicants “rarely turned up to a hearing”. When that happens, their application is refused.

But it doesn’t necessarily end there, because it’s possible to appeal an AAT decision to the Federal Circuit Court. So the AAT’s problem is also fast becoming the Federal Court’s problem. Simon Jeans points to Melbourne and an AAT refugee appeal lodged in July this year, which will have a preliminary hearing in March 2022. The final hearing may be another year or two later — “this can give an applicant a guaranteed four to five years with permission to work and Medicare, with the possibility of further time to stay and work by remaining as an unlawful non-citizen,” he said.

Now back practising as an immigration lawyer, he said “the real disaster” is that other general migration cases such as Family and Partner visas are now delayed in the AAT by one to two years, leaving individuals and families in limbo.

The Malaysian applicants, too, have a price to pay. “The people smugglers in Malaysia have got a whole industry set up for this,” said John Hourigan who heads the Migration Institute of Australia, the professional association for migration agents. “They can take it through the entire system. So you get here. Then they take you to see someone to put your claim together. And then someone else. The whole thing moves through like a sausage factory. The Malaysians are paying exorbitant money at every stage to these unscrupulous operators. They’ve been abused time and time again by everyone.”

The meltdown of the AAT system is a crucial part of the rapid growth in the numbers of temporary migrant workers in Australia. According to figures from the Department of Home Affairs, the number of people on bridging visas has been increasing exponentially. In 2014 it was 107,000. By 2018, the number was just shy of 200,000 — a large, highly exploitable group.

This giant malfunction in the system has created a “honeypot attracting people smugglers” who abuse the onshore processing system, according to Rizvi. It has been a problem years in the making which would cost the government “perhaps billions” to fix.

Assuming, of course, that anyone really wants to fix it.

NEXT IN THE SERIES: Migrant workers are overworked, intimidated and even killed on Australian farms.

24 thoughts on “Forget boat people, ‘refugees’ arriving at airports are gaming the system on a grand scale”