A young man has died. Another has attempted self-harm. A toddler, who has spent her entire life in detention, was hospitalised. Here's the day-by-day account.

Last Saturday morning I woke up to a phone full of messages.

Abdul Aziz, a 23-year-old Afghani asylum seeker had died suddenly late Friday night at the detention facility, Melbourne Immigration Transit Accomodation (MITA), where he was being held. Initial reports were confused, and almost everyone I spoke to from his unit was sleep deprived and in some degree of shock after watching the Serco and then medical staff attempt and fail to resuscitate him.

Another asylum seeker had collapsed watching Abdul being worked on and was hospitalised the same night.

Later on Saturday Abdul’s roommate explained to me how he had heard Abdul fall out of his bunk and attempted to assist him, before realising it was very serious and calling guards.

Then later on Saturday night a relative of Abdul contacted me on Twitter and explained that his family had not been contacted by the Australian government. I contacted the Asylum Seeker Resource Centre (ASRC) and asked them to co-ordinate and establish contact with the Australian government. ASRC had been in the process of accessing Abdul’s case to see if they could assist. He had arrived in Australia as an unaccompanied minor in 2013.

On Sunday morning Huyen, another detainee at the facility, messaged me to say she was in Northern Hospital with her 16-month-old daughter, Isabella, who has spent her entire life in the Melbourne detention centre.

Isabella has been sick for the last month with fevers and sporadic vomiting. In the last three weeks I became frustrated at pitching more stories about multiple sick toddlers and infants in MITA and instead sent multiple emails to the Victorian Children’s Commissioner and the children’s lawyers to ask they contact Australian Border Force to request medical treatment for both Isabella and two-year-old Tharunicaa who has ongoing mouth infections. Ten days earlier, Tharunicaa also received a head injury when a large whiteboard fell on her and she was hospitalised twice in 24 hours — but only after intervention from lawyers.

Huyen said doctors had been surprised to meet Isabella as they had been told there were no children in detention.

Later on Sunday, another Afghani man in MITA attempted to self-immolate and was saved from hurting himself more seriously by his roommate. The man who had collapsed on Friday night was also re-hospitalised after another collapse.

On Sunday evening Abdul’s uncle finally decided to tell his parents their son had died. They had grown alarmed at their son’s silence because he spoke to his mother four or five times a day via Skype, and news was travelling fast in the Afghan community.

His uncle did a Skype interview with me an hour after, and I could hear Abdul’s mother and sisters crying in the background.

The coroner’s office was the first Australian official to make contact with Abdul’s family. Then on Tuesday, five days after Abdul died, someone from the Australian government called to offer their condolences. There has been no offer to repatriate Abdul’s body to his family and ASRC is looking to launch a fundraiser to achieve this.

On Wednesday morning, a group of 50 people from Mums 4 Refugees and Grandmothers Against Detention gathered in frigid weather outside the hospital for Isabella. Police were present, and said they were there to protect those at the protest from anyone from the far-right who might target them.

Hospital staff told me I was able to visit Huyen and Isabella, but inside the ward two Serco guards attempted to tell me that wasn’t so. I encouraged them to call Border Force and avail themselves of the facts while I called Isabella’s lawyer, my lawyer and my editors so we could all have a chat. Hospital staff appeared and reminded the guards I was allowed to be there.

Huyen explained she was sleeping in a fold-out chair but didn’t mind because the food in hospital was so much better. Huyen’s husband and mother-in-law had been able to bring her food and spend hours with them as well. She sent me a lot of pictures of food over the week.

On Thursday Isabella was discharged back to MITA with Huyen.

Abdul’s family asked the coroner not to do an autopsy. They just want him back and told me “the Australian government killed him, we don’t need any tests”.

An autopsy result is expected today. A vigil will be held for Abdul in the Melbourne CBD tonight but asylum seekers in MITA tell me ABF and Serco have not made any attempt to run a memorial for Abdul in the centre in which he was held.

A friend of Abdul’s has placed a couple of flowers in a paper cup outside Abdul’s room. 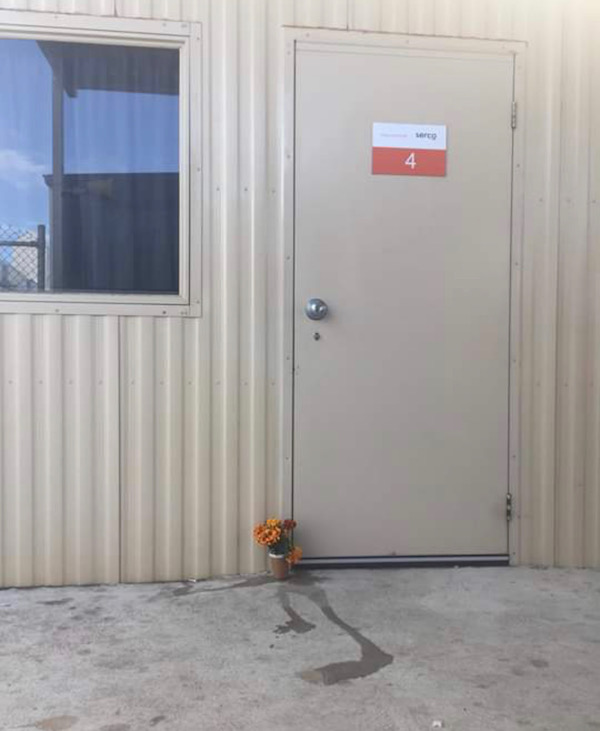 11 thoughts on “A horror week in Australian onshore detention”