We know that plane travel is terrible for the environment, but 'flight shame' probably won't bring us towards a real solution.

Have you heard about flygskam? It’s the hottest new thing out of Scandinavia. And it’s here to make you feel extremely bad. Flygskam is a Swedish word that translates to “flight-shame”. It describes the feeling of being aware of the environmental damage caused by plane travel.

This is something we all know these days: plane travel is unquestionably terrible in terms of its carbon emissions. A few hours in seat 32F create more kilograms of carbon than heating your house or driving your car would create in months.

I calculated the carbon intensity of a recent trip I took to Indonesia, and it was disappointingly high. Two of us flew from Melbourne to Denpasar, round trip. Total emissions were, according to the official ICAO calculator, 1000kg of carbon. A tonne.

The tropical holiday was delightful, but we would have emitted 10% less carbon had we driven to Cairns and back — a journey of 6000km.

Do we really have an alternative?

In Sweden, the concept of flygskam is being used to coax and coerce people out of flying. Which is fine, because the Swedes can catch ferries and trains as they spread out across Europe on their summer vacations.

But here? In Australia? Can we handle flygskam? There’s no train track that can get us out of our country. Surface travel from Sweden to France — the world’s favourite tourism destination — is a matter of 13 hours. From Australia it’s at least a month, probably on a cargo ship.

Our multicultural society — made up of many migrants — means family reunions require a passport and a plane ticket. We have no practical alternative to flying, other than staying home and loading up Skype. That lack of options can be seen in the official statistics. Our attachment to flying will take a lot of flygskam to displace. We’ve more than doubled our overseas trips in the last 12 years.

That’s not to mention the inbound trips by foreign visitors, which have increased by two thirds over the same period. Tourism is now one of our major exports, accounting for 10% of export earnings, and growing very rapidly as the Aussie dollar slides. 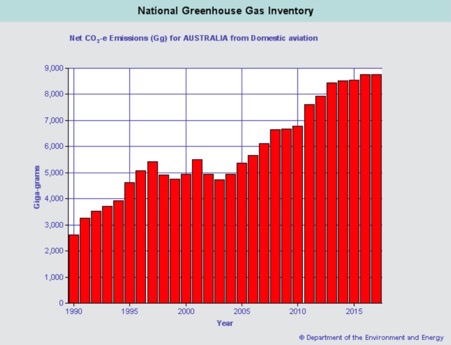 Working prototypes of electric aeroplanes have been in existence for several years now. Electric-powered aviation could help reduce carbon emissions, so long as the electricity generation is low in emissions. But nobody thinks electric planes are close to taking over commercial air routes.

Battery technology is still too heavy. That is holding back dozens of fields, but none more completely than aviation. The explosive power of jet fuel in jet engines is very hard to replace (jet engines are, by the way, extremely efficient) and liquid fuel has a side-benefit: as the fuel is used, the aircraft gets lighter.

While some airlines talk up the chance of electric planes, big commercial jets have very long lives and the industry is extremely risk averse. Expecting rapid change in the world of aviation is a recipe for disappointment.

What’s more likely is airlines will work out ways to continue to trim their carbon intensity slightly, using offsets and even flying slower to save on fuel.

What’s the point of shame?

Shame can be useful for obtaining better social outcomes. It’s a way of raising the cost of doing something in order to stop people from doing it. But if we use a different system, we can get a better outcome. Yes, I’m talking about a carbon price. A price on carbon would have the same effect as attempting to shame people for flying — it will discourage some people from doing so.

The downside of flygskam — of shame — is that when you pay the price, you feel bad but nobody benefits. When you pay a carbon price, by contrast, a benefit is transferred. If you pay $30 to offset a tonne of carbon, that $30 is collected by the agency in charge of the carbon price. And they can use it productively to obtain carbon offsets.

A financial transfer is a more socially beneficial system than shame. Plus, it’s easy to dial up and down. If you haven’t prevented as much travel as you want, you simply haven’t set the price high enough.

Yes, we are surely able to trim our flying somewhat — some already are — but until e-planes are whining their way through our skies, it’s realistic to expect the best way for Australia to reduce our net aviation emissions is by using a carbon price to buy offsets.

Do you think flygskam has a place in Australia? Send your comments to [email protected]. Please include your full name.

Australia — a banana republic in the grip of crony capitalism

I used to purchase carbon offsets along with my plane fare, but I don’t anymore.

All those solar panels would be more effective if you didn’t fly at all.

That first graph needs a label on the vertical access for it have any meaning…….

From which airport? Or are they a total for all airports?

If, as you suggest, it’s recording Overseas arrivals and Departures does that mean it includes inbound tourists and foreigners returning home, or just Aussies leaving and returning.

Sure, one could make a reasonable guess, but why publish the graph at all if you are going to leave the Vertical Axis descriptor off?

Why don’t we plant more trees they need carbon dioxide so it will our duty to fly more so they can produce more oxygen.

Carbon offsets work by transferring the carbon in fossil fuels (which currently are safely hidden away in the ground) to the carbon in vegetation such as trees, which are at risk of being suddenly released by such events as bushfires.

Trees don’t produce oxygen from the carbon dioxide we dump into the atmosphere. They produce it from water (and global warming might mean there’d be less water for the trees when they need it). If the atmospheric CO2 went to 1000 ppmv (0.1%) from its current a little bit more than 400 ppmv, it wouldn’t change the oxygen level much from its current 21% even if plants did convert carbon dioxide to oxygen, instead of more plant matter.

Carbon offset is a bullshit scam. Wayne describes above the theory, but it’s not a credible one.

Pricing is a flow through producer tax designed to make fossil carbon energy dearer relative to other energy. Offsetting does nothing to affect prices and is based on a demonstrably false assumption of locking up carbon. The best thing we could do ban it as a commercial entity.

We could readily manufacture high energy density liquid fuels but it would cost a lot more than kerosene – initially at least.

Flight shaming could work within Australia. In my view, a substantial proportion of flying for business we do in Australia cannot be justified. Much of it is simply because we can, not because it is genuinely necessary.

Imagine if Abbott and Turnbull had not butchered Labor’s NBN. The capacity for HD high speed conferencing and data transfer would keep many self-important business types at home and the atmosphere would be much better for it. But that possibility was killed off by making NBN about streaming movies, not productive efficiency. Abbott and Turnbull can never be forgiven for that act of bastardy.

Lovert
Reply to  Been Around

Quote “But that possibility was killed off by making NBN about streaming movies, not productive efficiency.”

The internet has become about streaming movies ….. blind Freddy could have seen that coming 20 years ago. The architects of the NBN didn’t have the foresight when they designed it to allow it to cope with the future and it was hobbled and many ended up on wireless and satellite when they should not have which overloaded the available spectrum.

“e-planes” are a realistic goal for the future for much of our medium range aviation needs, a twin engine hydrogen fuel cell aircraft should be able to carry 40 -50 passengers and cruise at close to 300knots. It’s all dreams at this point though.

Well, the original NBN architects DID have the foresight to design it to cope with the future. It was called fibre-to-the-premise (FTTP). Abbott and his cohorts, in their stupidity, hobbled it for a variety of reasons, none of which were for the benefit of the public. It will be fixed some day in the future, but at a far greater cost.

People in my town who live anywhere further than 1km from the town center have been moving from well functioning ADSL with low latency 10Mbit+ download speeds over to wireless NBN often running at 2- 4 Mbit download speeds (and higher, variable latency). Even FTTN would be better for them. Some blame the low speed on the ‘Netflix effect’ but it’s really a lack of vision from those who designed what we have ended up with.

I guess many have ended up on wireless as a result of the hobbled Abbott / Turnbull version of the NBN and as you say under the original version they would have had FTTP.

It always amazes me that our grandfathers were able to push telephone and electricity lines out to all but the most remote properties, but the ability to do the same with the thin blue NBN line is somehow beyond us.

Absolutely agree in principle.
But we are the only country in the world to have introduced a market mechanism for carbon – and then removed it.
Which means that however much economic and scientific sense it makes, politically it will never happen – especially after the last election.