Does Australia have one of the least generous paid parental leave schemes in the OECD?

Advocacy group Parents At Work says Australia has one of the least generous paid parental leave schemes in the OECD. Is that right?

Walsh’s claim is a fair call.

The average length of paid parental leave among OECD countries is around 55 weeks, while Australia’s system offers 18 weeks, according to OECD data.

Unlike the majority of the 36 members of the OECD, Australia provides a flat rate rather than a replacement wage.

This makes the Australian system generous to low-income earners and part-time workers but not to those who earn more than the full-time minimum wage.

And Australia’s provision for “secondary” caregivers of a total two weeks’ paid leave — a right that according to experts is rarely used — is well below the OECD average of 8.1 weeks.

An international network of academics and policymakers puts Australia’s scheme in the least generous of three categories of paid parental leave, because it offers less than four months leave. The network did not classify this as “well-paid” leave.

The context of the claim

In her radio interview, Walsh was asked about barriers in Australia to men getting extended leave from work.

She responded with her claim about generosity relative to other OECD countries and went on to say: “We have an average of 18 weeks, minimum wage, and that’s really set up for the primary caregiver and obviously in many cases that is women. It then is up to a woman to then transfer that leave to her partner. So the system really isn’t set up, first of all, to support men easily to take leave in their own right.”

Given this context, Fact Check has assessed Walsh’s claim on the basis of Australia’s support for both primary and secondary carers, and both new mothers and new fathers.

Parents in Australia have been entitled to government-mandated leave after childbirth or adoption since January 1, 2011.

Under the Paid Parental Leave Act 2010, eligible new parents can take up to 18 weeks’ leave, funded by the Federal Government and paid at the rate of the national minimum wage.

“It’s not strictly ‘leave’, nor is it limited to mothers,” Whitehouse said.

Since 2013, fathers or partners have been entitled to “Dad and Partner Pay”, or DPP, a separate, non-transferable payment.

This is two weeks of taxpayer funded leave, paid again at the national minimum wage rate.

Australia also provides 52 weeks employment-protected leave for new parents, but this is unpaid.

Experts also told Fact Check that employees could be receiving additional leave based on their employment contracts.

But since Ms Walsh used the expression “paid parental leave schemes”, Fact Check has confined its assessment to government-paid entitlements available to workers.

What international data is available?

The Organisation for Economic Co-operation and Development, or OECD, is an intergovernmental body of the world’s most developed nations.

Membership is decided according to criteria including having an open market economy, a stable and transparent financial system and a “regional or global role in the world economy”.

Its research unit compiles data on parental leave for its 36 member countries, collected from secondary sources and national correspondents.

The latest was published in the OECD Family Database in 2016.

Experts told Fact Check this dataset was still relevant and reliable for comparison.

A spokesman for the OECD told Fact Check that Lithuania had become the 36th OECD member in 2017, but the 2016 database included information for OECD candidate countries including Lithuania.

Fact Check has included Lithuania in its assessment, as it was a member at the time Ms Walsh made her claim.

Other data sources suggested by the experts are the Workplace Gender Equality Agency, an Australian Federal Government agency, which published a paper on the topic in 2017 and an international academic group, the International Network on Leave Policies and Research.

The group has 60 members including researchers, academics or policy makers, all experts on leave issues, from 43 countries around the world.

They produce a yearly international leave policy review with country updates and cross-national comparative tables that uses information and sources provided by the members from each country.

Baird and Whitehouse are members and co-wrote Australia’s profile for the network.

“Almost all OECD countries have public income support payments that are tied to taking maternity leave,” it says.

Leonora Risse, from RMIT University, told Fact Check that the key in understanding international comparisons of paid parental leave is terminology and eligibility.

The OECD report notes that in some countries, including Australia and New Zealand, “there is no separate entitlement for (paid) maternity leave with stipulations instead integrated into the parental leave scheme”.

Other countries have an arrangement under which each parent has a period of maternity/paternity leave and a separate shared period of parental leave.

This leave “frequently, but not in all countries, follows the period of maternity leave,” the report says.

Home care leave typically allows “at least one parent to remain at home to provide care until the child is two or three years of age,” the OECD says.

“Home care leaves are less common than the other three types of leave and are offered only in a minority of OECD countries.”

Risse told Fact Check: “The role of the OECD is to produce data that is comparable across countries wherever possible … but some assumptions and averaging has to come into that.”

The OECD records the number of weeks offered by each country’s scheme.

Australia’s 18-week scheme is well below the average length of paid parental leave for mothers in the OECD’s 36 member countries of 55 weeks.

The OECD then identifies three rates that governments use to compensate parents for their lost earnings: as a proportion of a worker’s income (for example Hungary at 70% the Czech Republic at 70% but with a daily cap); as a full replacement of income (Austria and Poland); or as a flat rate (as Australia uses).

It compares schemes by taking the payment to workers on the national average wage, and by calculating the number of weeks of paid leave they would receive “if it were paid at 100% of previous earnings”.

Risse told Fact Check: “It’s a clever and appropriate way of combining both [length of leave and rate of pay].”

In Chile, for example, mothers are entitled to 30 weeks total paid leave with 100% replacement of the net income averaged over the previous three months, with no ceiling on the payments.

That means that the OECD’s “full-rate equivalent” at the average wage for Chile is 30 weeks leave.

On the other hand, Australia pays parental leave for 18 weeks as a flat rate at the full-time national minimum wage.

So for Australia, the “full-rate equivalent” at the average wage is calculated by the OECD as 7.6 weeks.

Risse provided the following calculation for Australia’s “full-rate equivalent” in weeks and “average payment rate”, that other experts reviewed:

Australia with 7.6 weeks “full-rate equivalent” of total paid leave available to working mothers on the average wage exceeds only the USA (0) and is a little lower than New Zealand (7.7), Switzerland (7.9) and Ireland (8.9). 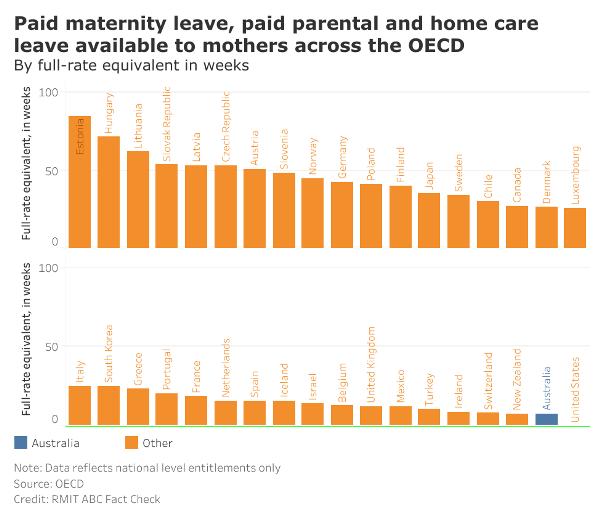 Peter Whiteford, of the Australian National University, told Fact Check that by providing two weeks of paternity leave, Australia is probably “slightly better on leave for fathers” in the OECD ranking.

Australia’s paid paternity leave is higher than the OECD average of one week.

However, when it comes to “total paid leave reserved for fathers”, Australia’s two-week entitlement is well below the OECD average of 8.1 weeks. Australia ranks ahead of countries including Chile (1), Italy (0.4) or Ireland (0).

And for fathers or secondary carers, Australia offers 0.8 weeks “full-rate equivalent” exceeding 12 of 36 OECD countries with lower or no entitlement. 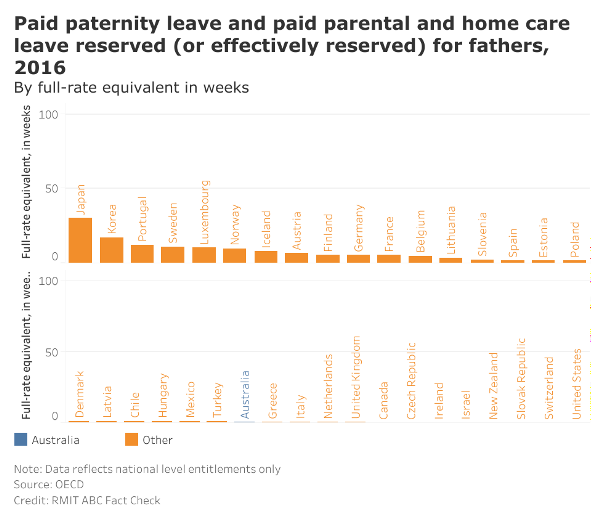 This low ranking reflects the more generous schemes in other countries that can be used by either parent or shared.

The International Network on Leave Policies and Research notes that Australia does not provide incentives for fathers to take the paid leave they are entitled to, unlike some other OECD countries.

Eight OECD countries offer a “bonus” for fathers in the forms of economic benefits or additional family leave time.

For example, Sweden has a “gender equality bonus” that gives economic incentives for families to encourage them to divide parental leave more equally, while Germany and Japan extend the maximum weeks if both parents use some of their entitlement.

Whiteford suggested examining eligibility and comparing “people who are actually covered” by each country would be another way to assess “generosity”.

“The ‘spending per child born in a year’ is a proxy for this,” he told Fact Check pointing to the relevant chart in the OECD Family Database report, which uses data from 2013 from 33 OECD countries. 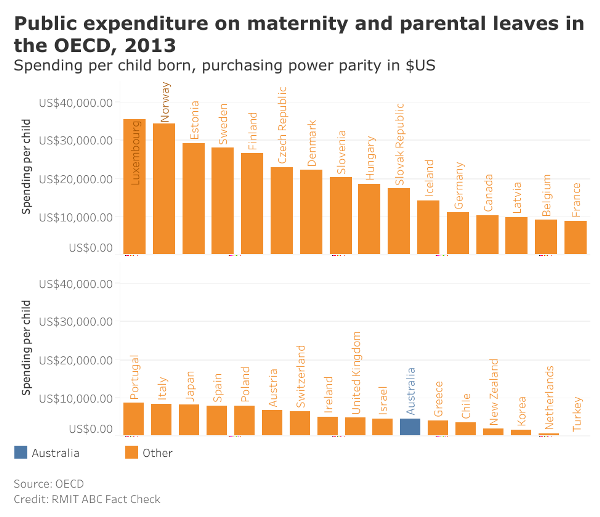 Australia is the seventh-lowest country on this measure.

“Although, because it is adjusted to US dollars in purchasing power terms, this will explain why we are more generous than countries like Greece and Turkey which are much lower income than Australia,” Whiteford said.

The International Network on Leave Policies and Research divides the countries it monitors into three groups based on the total leave available to parents and payment provisions.

In the first group there are OECD countries like Austria, the Czech Republic, Denmark, Japan, Iceland and Sweden which according to the network provide nine months or over of “well-paid post natal-leave (at two thirds replacement rate)”.

However, many of these countries have in place payment ceilings, above which no payment is made.

The final group, in which Australia is included, comprises countries that provide less than four months of “well-paid post-natal leave”.

This is also often delivered as maternity leave and other than Australia, the group includes OECD countries like Ireland, the United Kingdom, France and the United States.

Further, the report does not consider that Australia’s 18 weeks of paid leave is “well-paid”.

It noted that: “Parental leave entitlements continue to vary greatly across OECD countries, in terms of the length, the flexibility, and the level of payments.”

It said the majority of OECD countries have extended leave entitlements around the birth and adoption of a child to support both parents/carers, “recognising that fathers/partners taking leave is good for children and for women’s labour market outcomes”.

The report concluded that Australia’s statutory paid parental leave scheme was flexible in terms of usage, yet by international standards “not very generous”.

The OECD spokesman told Fact Check that countries have different objectives with their paid leave systems, so terms such as “lengthiest” rather than “generous” are used in cross-nations comparisons.

“Some countries (such as some of the Baltic and Eastern Europe countries) put strong emphasis on allowing at least one parent to stay at home for a long time. Other countries put more emphasis on gender equality and women’s employment and careers, as well as on sustaining family income during the leave period,” he said.

“Both are ‘generous’ in their own way.”

Risse told Fact Check that Australia’s flat rate puts women in a dilemma between leaving the workforce and having a baby.

“Australia’s paid parental leave policy has been constructed more as a welfare subsidy for new parents, rather than as an economic compensation for forgone income,” she said.

“And it’s high-income earning women who face that decision more.”

Whiteford agreed that Australia is probably more generous to low-income families and part-time workers because it provides a flat rate at the full minimum wage.

“Those countries with higher replacement rates will tend to be more generous to mothers who had higher-paying jobs before childbirth,” he said.

“It is paid in full … Thus it is possible to receive more on PPL than their regular [part-time] wage,” she said.

“Many women don’t earn average weekly amounts, so for some, a flat rate is better than a percentage system.”