The former Nationals leader serves up an instant classic in his online war on grace and logic.

Joyce to the world. The New Daily reports on a Facebook rant from former Nationals leader Barnaby Joyce decrying the idea of Australia acting on climate change as “barking mad”. The 760-word post, which may as well get redder in the face and develop bulging temple veins as it goes on, hits a lot of the classic denialist talking points: Australia can’t impact climate change; he knows he’ll be accused of “heresy” for daring to talk outside the “predetermined paradigm”, etc. Then he jumps headfirst into full deep-state conspiracy: “Private property rights are removed, by the implementation of vegetation laws, because of ‘climate action’. The state will limit your access to electricity because of ‘climate action’.”

It put us in mind of a few of Joyce’s greatest social media hits. There are old classics, like when Joyce tweeted

Dear @roboakeshott I’m leaving today. Went swimming and I should lose some weight then I thought what you would say, ‘beautiful in its ugliness’. So many memories Rob; picnics, sunblock, you supporting the Green/Labor/Independent alliance. Now a future of electric cars. Cheers.

(It’s worth noting that’s not the Twitter handle of former Independent MP Rob Oakeshott, but just some bloke with the same name.)

There are deep cuts, like, last December’s overlooked gem. After Bob Hawke declared he was in “terrible health”, Joyce tweeted a pixelated image of the former PM captioned:

Hope Bob is not calling it an innings. The honesty of being to the top is something treasured when honestly given. Like Bob said we should go to nuclear power.

Then there’s his masterpiece, his “Bohemian Rhapsody”. During the election he tweeted a screen cap of advocacy group Women Vote’s election score card:

Golly gosh wow wee ABC’s Vote Compass rates Labor as ‘provide detailed polices likely to make meaningful progress against issues’ on? Everything!!! We are all so lucky that they are so balanced and funded by? All of us!!! Thank you ABC Vote Labor Compass.

And then, a little later on, he conceded that he had been informed by “Matthew Kozal” (a mangling, we presume, of journalist Michael Koziol) that “it was not ABC Vote Compass, it was on ABC’s The Drum“. 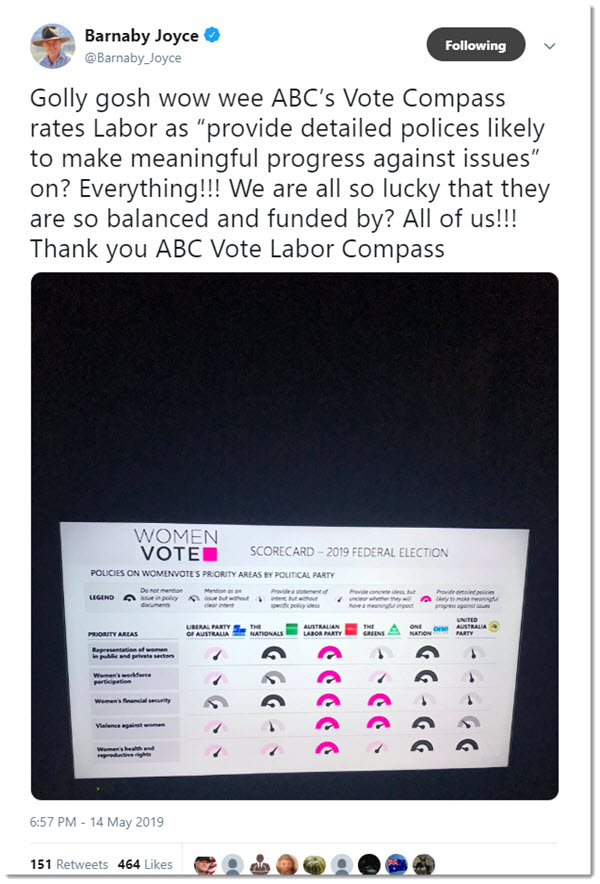 What’s a little disclosure between friends? Scott Morrison is only the latest in a long line of devout Australian prime ministers. Tony Abbott and Kevin Rudd were both strongly religious. So, too, was Bob Hawke (although in his case Bob was the deity and others were expected to worship him). Morrison’s harmless enthusiasm for public prayer appears to irrationally infuriate many progressives on social media. But our eye was drawn to some fulsome support in the evermore pro-Coalition Nine newspapers for Morrison’s happy clapping this week by one Stephen Fogarty. Who he? All we were told by Nine is that he “is the president of Alphacrucis College”. What a shame that Nine neglected to explain that Alphacrucis College is a Pentecostal theological college with deep links to Morrison’s Hillsong corporation Church. How deep? Here’s Fogarty presenting an honourary doctorate to Hillsong’s Brian Houston last year. 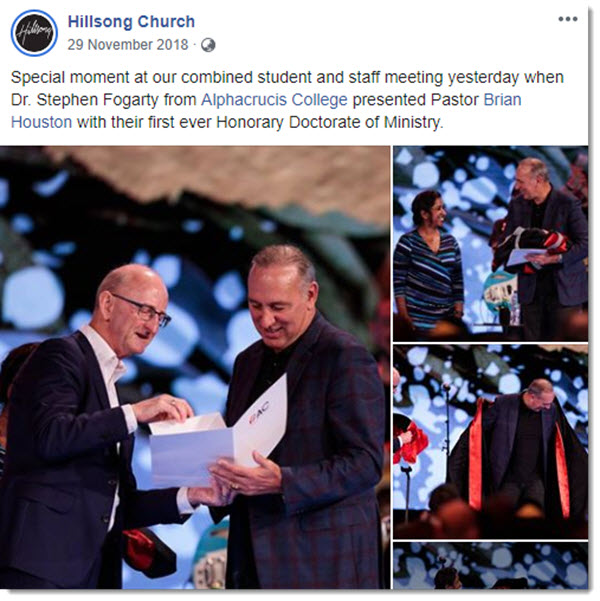 By the way, that presentation happened right after Nine’s own Sixty Minutes had explored Houston’s role in relation to his father’s sexual abuse of children in the Assemblies of God church. Strange that Nine didn’t think any of that was worth sharing when it ran Fogarty’s op-ed.

Fact off. Let’s hope this doesn’t give our government any ideas… The Mexican government has established an “independent” “fact” “checking” unit, to compete with the several actual independent fact checking services that the country already has. The government service is called “Verificado Notimex,” inviting confusion (accidental, we’re sure) with the existing fact checkers VerificadoMX.

For several months, president López Obrador has spent two hours every morning talking to Mexicans live on social media. Every day, from 7 to 8:30 a.m., he gives long speeches about his government and answers a handful of questions from selected journalists. VerificadoMX follows him closely and has concluded that about 50% of what he says in his Youtube appearances is false.

On July 2, López Obrador celebrated his first year in power with a long speech at a live morning event. Animal Político, one of the International Fact-Checking Network’s signatories in Mexico, published a detailed article pointing out six false claims he made throughout his speech. Throughout the course of 90 minutes, the president had twisted information about employment, gas prices and foreign investments, to name a few. By comparing the president’s comments to official data, Animal Politico was able to point out to Mexican audiences exactly where and how López Obrador had manipulated his facts.

‘Verificado Notimex,’ on the other hand, didn’t publish a word about that speech.

‘Home in the Voldemort?’

I saw this arrogant shite in the street today and cannot believe how accurately my assessment of him accorded with his florid I don’t need to acknowledge you and as for eye contact forget it you
twerp.

Why is it that politicians with bible bashing credentials-and the ones who are blathering on about religious freedom-have no compunction or moral scruples against seeking to enforce their religious beliefs onto the rest of us?

Craven and venal, along with those who returned him with a greater swing.

In May, twenty three percent of the registered voters in New England either did not vote or did not cast a valid vote. General apathy is alive and well there, the perfect petrie dish for an organism like Joyce to flourish.

If Barnaby`s brains was a septic tank it would only need pumping out once a year , hang on, considering what comes out of his mouth I think it
is.

I was amazed how many CMMFEU miners in full uniform were handing out for Joyce in the new england electorate at his polling booths at the last 3 recent elections , I asked a couple why, they said they were farmers first and mine workers 2nd, wonder if any are ripping off their drought relief subsidies while pulling in big wages, might explain a lot and I wonder if whats going on has dawned on the member for hunter Joel Fitsgibbon yet.

From what Fitzgibben has said I think he had a fair idea. His concerns and predicament was ignored by the know-it-all’s in the party machine and he was hung out to dry. He virtually had no exposure through the whole campaign. He had a good debate with Littleproud at the Press Club a few weeks before the election. Of course it wasn’t reported by media but worse, what he had to say and how well he handled the platitudes of Littleproud was ignored by Shorten and the rest of his party. Labor has abandoned the bush and the bush knows it.

That’s true many farmers do work in or support mining.

”A Queensland mining company paid its workers to attend a protest against state water licensing reforms, directing farmers on its staff to don checked shirts and Akubras to illustrate the spread of community support for the company.

New Hope Coal is again in the news.

And in NSW….New Hope’s chairman, Robert Millner, was called before the Independent Commission Against Corruption (Icac) in NSW last year over a donations controversy involving another Washington H Soul Pattinson subsidiary of which he was chairman, Brickworks.

If true/accurate, that is a shocker.

Proportionally Australia’s possible contribution to the reduction of greenhouse gases is significantly more than the proportional contribution to some other activities I but I doubt that I will ever hear Barnaby Joke suggest that we shouldn’t take part in ‘anything’ because we won’t have an impact. Blinkers are a fashion accoutrement that springs to mind when confronted by the utterances of the man who bought our water back from that tax haven the owners had parked the rights in.

“Fact off. Let’s hope this doesn’t give our government any ideas.” No worries; one of the most brazenly mendacious governments in my lifetime has romped home. Obrador has stopped off at the ledger for a pie in this race.

“Morrison’s harmless enthusiasm for public prayer seem to irrationally infuriate some progressives on social media”. Harmless, really? The rest of the piece describes who Morrison is linked up with. Then relate that to the so called religious freedom crock we’re being subjected to and get back to me about how benign this horror show is.

Maybe those progressives are just irked by the way Morrison wields his government, carrying on doing what they do to people’s lives, holding them back, stagnating their wages, making life harder than it need be, even going out of their way to make the lot of some (refugees and scapegoats) a torture : while they enrich their donor mates, using “the system” and our tax dollars to do it, from which those donors take profits and hand them on to “their government” in time?
The way he uses his church as a prop?
The way they agree to let him use it?
The way he holds up his religiosity as some sort of imprimatur – some sort of excuse for doing what he does – making some lives shell – has a lot to do with it?
Maybe some people might think those progressives are demanding too much from our government and from a temporal clown who espouses his Christianity – a bit like Torquamada on those he declared heretics (unAustralian?) – who uses his “deep conviction” to screw others?
Some people might find that “progressive” attitude hard to fathom?
Maybe they should get out more.

Ref :- See what Julie Edwards has written about how Morrison and his government treat refugees? What sort of a prayer has Morrison given them?
“……. irrational”?