Four Corners investigation has the irrigation lobby jumping the gun

There was just one problem with the press release decrying this week's controversial Four Corners episode into water and the Murray Darling Basin.

Press release of the week. It’s only natural that, after being caught in the crosshairs of a Four Corners investigation, a peak body would look to start changing the record. Alas, National Council of Irrigators have somewhat jumped the gun. They sent out their missive on Cash Splash — Four Corners’ investigation into water theft — to various NSW politicians decrying the story as “biased and one sided”, and appealing to the elected representatives as fellow victims of  “unbalanced coverage” to avoid drawing too many conclusions from the show. This went out on the morning of July 8 which, a pedant might note, is quite a few hours before the show aired. Greens pollie David Shoebridge was so good as to share the “response” on Twitter. 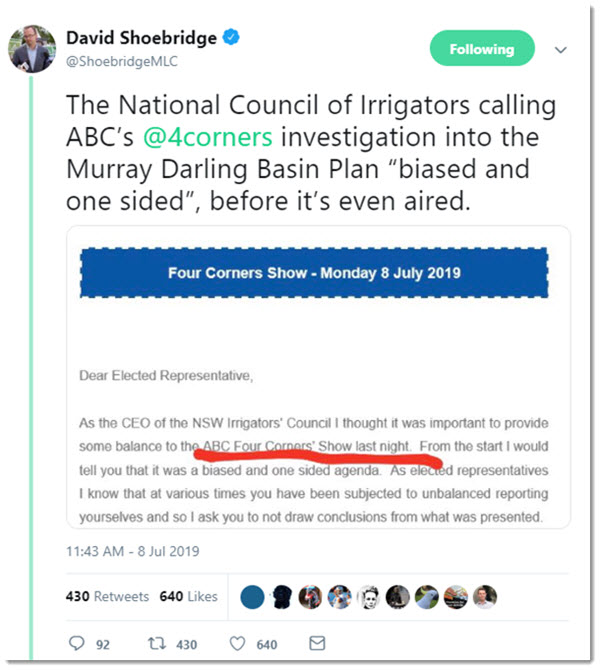 We’ve got a question for NSW Health. The Sydney Morning Herald ignited a small storm with a front page yesterday exclaiming that “NSW Ministry of Health data indicates up to 90% of young festival patrons used drugs”. The story also cited the NSW Users and AIDS Association as offering “anecdotal evidence” of a slightly higher figure. Seems high doesn’t it? Well dig a little deeper. We suspect that high figure is likely confusing lifetime drug use with substance use at festivals specifically. It’s important to recognise that many people use drugs at some point in their lives, but that’s a far cry from the improbably high “90% at festivals” statistic.

Such an alarmist number could be misused by police in prohibitionist NSW to push for further punitive and harmful policies, so there’s an urgent need for clarity on the source of the statistic. Especially when the same report challenges the claim that police have a “strong deterrent effect”. Crikey reckons NSW Health should make the relevant reports or research readily available to ensure that it is correctly interpreted.

Oh Christ, what’s this now? The US Conservative Political Action Conference is holding it’s first Australian date and… it’s exactly what you’re picturing. Republican congressmen, Fox News “analysts”, and Brexit-pushing-milkshake-magnet Nigel Farage will be joined by such local luminaries as Craig Kelly, Janet Albrechtsen and up and coming culture warrior Senator Amanda Stoker. Truly, the local line up runs the entire spectrum of conservative thought in Australia, from people who are always on Outsiders, to people who are not allowed to be on Outsiders anymore.

And what will this edifying three day experience set you back? A mere $600 bucks if you want the VIP experience — a “Reagan VIP Freedom Pass” to be exact, a name which is just missing an eagles’ shriek and some red, white and blue fireworks. You can also get an “Iron Lady General Pass” or, cheapest of all, a “Menzies 3-day Pass” for $149.

Hot tip guys: if you’re going to a new country to spread the good word on free markets and fighting the PC thought police, don’t make their conservative icon the budget option. Crikey would love to go, but unfortunately we’ll be busy spending those three days trying to drink several buckets of partially dried cement.

You can’t take it with you. Is former tourism minister Steven Ciobo ok? Heard anything that might interest Crikey? Send your tips to [email protected], use our guaranteed anonymous form or other ways to leak to us securely

These are strange times indeed. Let's check in with how Australia's media figures are coping with the latest virus news.

The Washington Post has a new blog all about the "conservative movement" and Republican Party, promising to explain what the right is "doing, thinking, and planning". Could be fascinating reading for political junkies of all persuasions.

Sarah Palin can't even pronounce the word "media" properly, but she is its hottest property: selling millions of books, commanding a legion of Facebook fans, and now pulling in two million viewers for her debut as a Fox News presenter.

On the subject of Four Corners’ Cash Splash program The Drum last night had Fiona Hodgkinson as a panellist. This is our food bowl she informed us, showing that farmers can be as ignorant as we much-maligned city dwellers

What the program had shown was water being diverted to grow cotton and almonds, both extremely thirsty crops. It was noted during Cash Splash that in a drought year farmers can choose not to sow some food crops unless and until there is sufficient water. But almond plantations must be watered every year, regardless of rainfall, water supply and the likelihood of a good crop.

The fact that $40,000,000 had gone to a Canadian pension scheme under an in-confidence agreement was not raised at all.

I usually enjoy The Drum even when I disagree with panellists. But last night their general ignorance of Cash Splash made me rather angry.

Me too, MJM…I felt that the ABC on The Drum program misrepresented the 4 Corners expose, leaving out huge chunks of info that would have put the government in a bad light…or worse light if that were possible.
What a fraudulent, corrupt lot they are…ruining the MDR system for a few wealthy foreign and domestic investors, while leaving the small farmers and townsfolk along the rivers with NO water…not even for drinking. And they all think that is acceptable? Go figure!

I don’t watch the Drum anymore. It has been successfully nobbled.

“Your $Tax @ Work!” – The M-DBR” – Murray-Darling Basin Rort?
Brought to you by the Limited News Party Government – to benefit their donors????
As a tax-payer don’t you love “investing” your tax in a “scheme” that :-
* “Allows a farmer on the Murrumbidgee to “buy” water from the Murray (that he could never use on his property, because his property is not on the Murray????), to sell back to the government at a profit”?????? Why doesn’t the government buy that water itself – cut out the middle man?
* That encourages these “sponge farms” to flourish? Where once limited (marginal rainfall) grazing land is opened up to plant nut trees that need even more water as they mature, irrigated from water drawn from shrinking rivers and creeks. Dwindling because rainfall run-off (feeding those water-ways) has been decimated as it’s trapped, channelled and stored in large shallow dams (with exposure to sun and thus rapid evaporation rates) that have to be topped up from those dwindling waterways, as they evaporate. Diminished run-off depriving those down-stream.
Any wonder the rorters want to keep this tax-payer funded rort going?
Any wonder Limited News is restricting it’s “news” to one side of the story and picking “clever” ways to attack the credibility of the ABC (radio), at the same time?

Independent media should emphasise that the M-DB (Murray-Darling Basin) Plan has NEVER in fact been implemented.

Neither the people of Farrer nor most commenters appear to be aware of that rather important fact. It matters, because the very concept of such an important Plan will be prejudiced once the misunderstanding takes hold that it was all done as it should have been, when it most certainly was not. There is no alternative to such a plan; the Basin being one system, breaking it into sections or abandoning will (BAD) speed the rate of ruin while (WORSE) destroying any prospect for solutions.

What has in fact been done appears to have been done by a M-DB Authority and State governments that were (are) contemptuously and systematically breaching the Water Act and the M-DB Plan.

Any solutions to the Murray-Darling Basin issues require that the Board and senior management of the MDBA (Murray-Darling Basin Authority) and WaterNSW be sacked, and that that the Commonwealth – under a competent government – use its corporations power to take over water allocations just as it did with industrial relations.

Re: ‘Oh Christ, what’s this now?’…How come these RWNJ/Fascists are even allowed into the country to join the local variety and spout their appalling nonsense?
Thought we had already dealt with these ‘foreigners’ and their unwanted views, by not issuing visas for them. This lot must have something the government can use to further reduce our democracy!!