While authors typically write and best-seller lists are usually a measure of popularity, Mike Winnet has demonstrated neither are required to become an Amazon success story.

The British entrepreneur would know, he’s literally written a book on the subject. Well, not really. He’s the “author” of The Contrepreneur’s Guide: How To Get A #1 Amazon Best-Seller.

The “book”, which will set you back eight quid, is a real page-turner. Filled with spread after spread of… blank pages. There are 144 pages in total, but what Winnet’s first foray into the publishing world lacks in substance, it makes up for in results.

After all, Winnet managed not only to get Amazon to publish the book, but also to feature it as a “hot new release” and the face of its entire finance, business and law section. 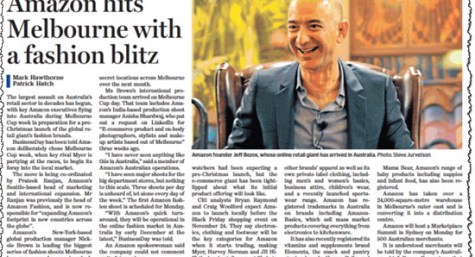 Why does the Australian media love Amazon?

He even managed to momentarily top journalist Michael Wolff’s latest account of the Trump presidency, despite having sold just 49 copies.

Not bad for an hour’s work — which is how long Winnet says it took him to write, design and upload the “book” to Amazon’s publishing service, where it prints and ships all manner of questionable business manuscripts at a hefty royalty rate of between 35-70%.

In a YouTube video documenting the process, Winnet demonstrated how he created a clickbait title, picked a niche (non-competitive) category on Amazon’s platform and slashed the price for ease of access.

“I couldn’t be arsed writing a proper book so I took the minimum viable product (MVP) to the extreme,” Winnet says in the video. From there, all he had to do was solicit some buzz from his social media followers and the rest is history.

The point? Winnet says he’s on a mission to expose the hordes of self-proclaimed business gurus flogging their get-rich-quick schemes all over the internet. He calls them contrepreneurs, hence the book title.

“Everyone’s an Amazon best-seller these days and contrepreneurs use it to establish authority, get speaking gigs and upsell you other products,” he explained.

The comments speak for themselves.

“Unveiling the all too common self-publicising nonsense that goes on with LinkedIn and other social media platforms,” one watcher said.

“The abundance of whitespace between paragraphs make this a quick easy read,” another quipped.

“I never knew it’s that simple,” one commenter said of the process.

The video is just the first instalment of a promised series aimed at exposing the various ways contrepreneurs sell their craft.

Amazon has content and quality guidelines for its publishing arm. The e-commerce giant says books should “provide a positive customer experience” to users.

“Content published through Kindle Direct Publishing is held to the high standards customers have come to expect from Amazon,” the company says on its website.

Winnet says Amazon told him they would take up to 72 hours to manually review his submission before publishing, but the book was live on the same day he submitted it.

Amazon did not respond to a request for comment on Monday. The book has since been removed from their English website, although as of writing it is still available on their Japanese site.

This article originally appeared on SmartCompany and is republished here with permission.

What’s a dot-com genius going to do with <em>The Washington Post</em>?

In the early 80s I bought a similar book called “The Wit of Malcolm Fraser”. That too, was a quick read. Later I came to be endeared to Malcolm especially comparering home to the most recent Tory bretheren in the LNP.

Conning your way onto Amazon Best Seller List
This was an interesting article and I understand the point the ‘author’ of The Contrepreneur’s Guide: How To Get A #1 Amazon Best-Seller was trying to make. Kudos to him, I think he did make his point.
However, as a first time author of a ‘real’ book I am not pleased with Amazon as I spent significant amounts of time and money to have my book designed and laid out in line with their guidelines and to have it edited and proofread in line with my own professional standards.
It looks as if I needn’t have bothered if they published a book without content on the same day it was uploaded.