The fate of Flight MH17 has taught us that the problems other countries face can quickly become disastrous for all of us.

In 2010 my son was in Cape Town, South Africa. He was due to board a flight that would take him to Libya, Madrid and then on to Amsterdam. In Libya the unthinkable happened; during landing the plane crashed and all 193 passengers save one little boy died.

When the news hits, your world ends. It’s like someone has punched you hard and it becomes difficult to breathe. But after the initial shock you get yourself together and try to find out what happened.

There is no immediately available phone number in cases like this; it’s no use calling the police, hospital or any other likely authority. You cannot get in your car and drive to the place where it happened. I phoned Foreign Affairs and they said they would get back to me, but nine years later they still haven’t.

Hours and many tears later that day, my phone rang. It was my son. He had booked a later flight because of work-related obligations.

When MH17 dropped from the sky it took me back to that day. I knew exactly what the relatives, mothers and fathers of those on board were going through during those first hours. Of course, unlike the crash in Libya, this was no accident.

Soon after the smoke plumes rising from a foreign sunflower field were extinguished, it became evident that this downing was the result of a crime. The plane had been targeted and knowingly shot down.

The gut-wrenching realisation that this had been an intentional act and that it could have been avoided must have been almost unbearable for those involved. It also placed MH17 in a different category from most other aircraft tragedies.

Because of the area in which the plane was shot down, the MH17 disaster presented political, humanitarian and geographical problems that had never been dealt with in any other aircraft fatality before. The random targeting of airliners by insurgents using ground-to-air missiles was unheard of.

It also became one of the most media highlighted airline tragedies in history because it happened in a world that had become extremely digitised. Imagery of the downed aircraft was available on the internet just minutes after it occurred, and people turned to social media for updates and news flashes.

Although the targeting of MH17 was most likely a mistake made by trigger-happy separatists and their Russian aides, that does not make it a lesser crime. Murder is murder even if the target wasn’t the one you were aiming at. But how does one find the culprits in a war-torn country where separatists and self-declared authorities are known by many different names and a leaking Russian border enables men and weaponry to slip from one country to another?

Despite the recent charges made against four suspects, no one appears to accept any blame for what happened to MH17. Not those responsible for leading the rebel movement in the Donbass area of Ukraine; not the Russians who claim they were not involved in the goings on in Ukraine; and not Ukraine who don’t take responsibility for the decision to keep their airspace open even though they knew their own military planes were being shot out of the skies. One on July 16, just a day before the MH17 disaster.

But maybe in the end we are all slightly responsible for what happened that day.

There is still a war going on in Donbass. To this day people are still losing their lives. But we have lost interest and have turned our heads in a world that has become too small to allow us the luxury of looking away.

If anything, the disaster of July 17 has made it clear that if we turn away from poverty and war it will eventually come to haunt us. In our world international terrorism as well as the unrestricted flow of weaponry have no regard for state borders, national sovereignty or human lives, and peace and security cannot be taken for granted.

Migrants will try to escape their poor countries and corrupt governments, crossing borders and seas by the thousands to secure a safe life for themselves and their children. Therefore the foreign policy of every country should be more than just a short-term national interest. The fate of Flight MH17 has taught us that the problems other countries face can quickly become disastrous for all of us.

Marianne van Velzen is the author of Shot Down: The Powerful Story of What Happened to MH17 Over Ukraine and the Lives of Those Who Were on Board. 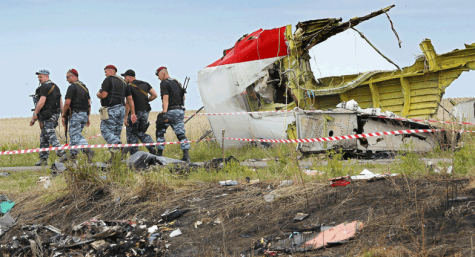 MH17: why a commercial jet was flying over a war zone

“Murder is murder even if the target wasn’t the one you were aiming at.”
So when an Iranian Airbus on a scheduled flight is shot down by a US navy vessel that is (illegally) in Iranian waters, that’s murder. The (claimed) error that the Airbus was, instead, an F-14 is no defence.
So when a Brazilian working in London is jumped, sat on, and shot that’s murder. The (claimed) error that he “could be” a member of a terror cell, and “could be” wearing a suicide bomb, based on his living in the same block of flats as a group under surveillance, is no defence.
So when a Medecins Sans Frontieres hospital is rocketed, killing patients, doctors and other staff, that’s murder. The (claimed) error that the Afghan forces calling for the strike had misidentified the hospital, and that its coordinates given to US forces had not been input to any targeting systems, is no defence.
Or is it just that MH 17 wasn’t shot down by our allies that makes it murder?
Is it just that the four accused over MH 17 made an anti-aircraft battery available to separatists facing Ukrainian attack that makes them subject to trial, where making weaponry available to our allies for use against Yemeni civilian and medical targets is fine?
The author goes on to the familiar dog-whistle that “migrants” try to “escape their poor countries and corrupt governments”. Apparently refugees headed west are just migrants; only, say, the two million or so on Ugandan soil, given land and access to the full (admittedly limited) range of local education and other services, can be mentioned as refugees because fortunately they aren’t headed west.
Come off it, van Velzen.

Correct. As is customary with Rightist propaganda, this article merely reinforces the carefully crafted propaganda position of the Right anhd the anti-Russian states. Soft power works by reinforcement of set stereotypes.

Obviously the writer’s position is entirely sincere. But every media report now has reporting of some individual’s views to give the human interest focus (dissidents excluded, of course) for an audience perceived as incapable of handling abstract thought.

With respect this is not murder as redfernhood suggests. In our law you must intend to kill that person. There is no evidence that this is the case. Russia is certainly culpable, but so must every arms dealing scumbag nation including the UK and the US. Consider the innocents killed in Iraq as the odiously titled Collateral Damage. The crew that shot down the Iran Air plane were promoted and decorated. The fault lies with many people and the government of Ukraine is high on the list, as is the airline. You may remember that Qantas was not flying that route and this was the case for many airlines. Great as the tragedy is and great as the responsibility must be, the judgement is not valid as it stands.

The actions of the so-called separatists are inexcusable and the anguish of those who lost relatives and friends is totally understandable, however, culpability for the tragedy extends beyond the person(s) who pulled the trigger.
Why was a commercial flight over a war zone in the first place? Other airlines had re-routed their flights.
It has been suggested that the shorter route taken by the pilot saved fuel and time, but surely passenger safety is the key criteria for route planning and that apparently was ignored.
In ascribing blame and compensation all parties should share the penalties.

Why is Crikey promoting this, what I have started calling effluent from the journalistic septic tank. What exactly is the point of this article? That many people suffer when a great tragedy occurs is a no-brainer, but when someone writes, not a piece of investigative journalism, but a shallow tear-jerker which focuses on one carefully selected tragedy, above others, then there is some other agenda here. Perhaps it’s merely to capitalise personally by writing yet another bad book on the subject, of which there are already many. That is pure selfish, insensitive greed. But then again, this piece skips over many points without landing on any, except for a couple of paragraphs in the middle where the officially-sanctioned “it’s them Rooshians wot dunnit” narrative appears yet again. A political football still being kicked about five years after the event. Like in that hollow echo chamber we know of as ABC News. There is a real story here, and those of us who have been following carefully have some idea of what it is. Books like this are just part of the ongoing cover-up, deflection, whatever you want to call it.

Did I miss the warning that this was a paid advertisement?
Despite the region being under total satellite surveillance by the Benighted States they have not released anything demonstrating where that missile was launched nor by whom.
If they had such confirmation it would have been provided gleefully.
The dog has not barked.

Malaysia, whose aircraft it was, has been shut out of the post crash process, even I believe to having access to the black box flight recorders. They have, to date and so far as I am aware, not accepted the process or findings.
Malaysia’s Mahathir Says Russia Being Made a Scapegoat for Downing of MH17
KUALA LUMPUR — Malaysian Prime Minister Mahathir Mohamad said on Thursday Russia is being made a scapegoat for the downing of Malaysia …
nytimes.com · 20/06/2019.