Are there really only 130 non-Chinese Australians who can speak Mandarin fluently?

Chris Bowen claims that there are only 130 Australians of non-Chinese background proficient in Mandarin. Is he correct?

Australians wrongly believe they have an innate understanding of China simply because it is Australia’s biggest trading partner, according to Labor frontbencher Chris Bowen.

At the recent launch of Labor’s plan to deepen ties with Asia, Bowen said it was to Australia’s disadvantage that the number of Year 12 students studying Chinese had dropped significantly since 2005.

“Out of the 25 million Australians who populate this great country … 130 people can speak Mandarin at a level good enough to do business, who aren’t of Chinese background,” he said. “We have a long, long way to go.”

Is that correct? Are there only 130 Australians of non-Chinese heritage who can speak Mandarin proficiently?

Bowen’s claim is an educated guess.

It was first promulgated by two Australian academics.

Professor Daniel Kane, formerly the head of Chinese studies at Macquarie University, estimated the number with the help of other academics, including Dr Jane Orton, director of Chinese teacher training at the University of Melbourne.

Kane and Orton told Fact Check there was no formal or precise way of calculating how many people of non-Chinese background used Mandarin at a proficient level.

But given this group was so small, it was possible to count them informally, they said.

Fact Check canvassed the figure of 130 with several experts in the field, all of whom agreed that it was likely to be in the ballpark.

How do we define proficiency in Mandarin?

Orton defined Chinese language proficiency as a standard that was normal for adults to use for work purposes.

She said this meant people who could read, write, speak and understand the language as well as a native Chinese person, in order to do tasks such as give a lecture in their field, read documents, take notes, run a meeting, or run an office or factory.

This standard broadly equates to level five or six in the Hanyu Shuiping Kaoshi (HSK) test — an international standardised test used to assess the Chinese language proficiency of non-native speakers.

Level five denotes those who can read Chinese newspapers and magazines, watch Chinese films and write and deliver a long speech in Chinese.

Level six denotes people who can easily understand any information communicated in Chinese and can easily express themselves in writing or speech.

How was the number of 130 derived?

The figure of 130 was an estimate calculated by a group led by Professor Kane, comprising Year 12 Chinese language examiners, university lecturers, members of the Department of Foreign Affairs and Trade (DFAT) and members of the Australia China Business Council.

The group counted the number of people with proficient Chinese language skills working in the following areas and organisations: academia, the public service, the diplomatic community, the Australia-China Business Council and the Australian Chamber of Commerce and Industry, as well as non-Chinese teachers of Chinese.

Professor Kane told Fact Check he had not included the military and noted that his methodology was “guesswork, but educated guesswork.”

“There really is no accurate way of calculating how many [non-native Chinese] people speak Chinese at a proficient level in Australia,” he said. “I’d be very surprised if it was greatly in excess of that.”

Dr Orton said the group had originally estimated 105 people, about five years ago, but added a further 25 to account for anyone who may have been missed.

“The China world [in Australia] is still small and basically everyone knows everyone … plus, if you have learned Chinese to any standard, you will have gone through one of the Australian schools and universities,” she said. “One hundred and thirty is an informal, but very well informed, estimate. Even if it was 105, or 120, or 145, it couldn’t matter less; it’s still absolutely peanuts.”

What do other China specialists think?

Clinton Dines, a former president of BHP Billiton China, and a fluent Mandarin speaker who lived in China for almost 36 years before returning to Australia in 2014, said 130 was likely a generous estimate.

“In terms of senior decision-making roles — government, academia, business — there’s not 130, I can tell you that for sure,” he said.

The president of the Chinese Language Teachers’ Association of Victoria and chief Victoria Certificate of Education (VCE) examiner in Chinese as a second language, Jixing Xu, told Fact Check it was impossible to know the exact number because “no one is keeping these numbers”.

Hamish Curry, the executive director of the Asia Education Foundation, said: “Chris Bowen is correct to point out the low number of adults in Australia of a non-Chinese background or heritage who have a business level of proficiency in Mandarin.

“One of the key pipelines to change this would be to have more students learning Chinese in schools. Yet the percentage of students completing Year 12 Mandarin has barely shifted in the last 10 years.”

So, what do the numbers show about students learning Chinese?

Data collated by the Australian Curriculum Assessment and Reporting Authority (ACARA) shows Year 12 enrolments in Chinese as a percentage of all language enrolments has remained within a narrow band between 19% to 21% since 2006. 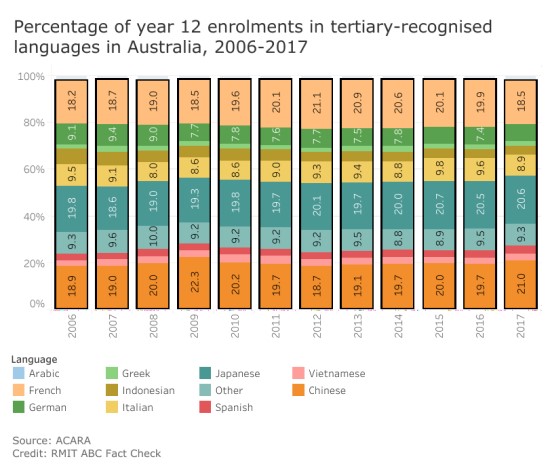 According to the statistics, Victoria has the most students studying Chinese at secondary school.

Figures compiled by the Victorian Curriculum and Assessment Authority (VCAA) show the number of Victorian students enrolled to study Chinese as a first language increased by 27% in the five years to 2018.

Meanwhile, students enrolled to study Chinese as a second language slumped by 23% over the same period.

According to a 2016 report prepared by Dr Orton for the Australia-China Relations Institute at the University of Technology Sydney, the number of students learning Chinese in Australian schools has doubled since 2008, to 172,832.

The expansion has occurred nationally, although not uniformly; half of all students of Chinese live in Victoria.

The report identified weaknesses in teaching and a lack of funding for special programs among the main reasons for why the number of students studying Chinese as a second language has dropped.

It also identified a rise in international students taking Chinese, but only a small rise in the total number of local students of any kind taking the subject.

It said there had been “an overall drop over the past eight years of some 20% in the number of [students] taking Chinese as a second language.”

The report noted that students who spoke Chinese at home usually enrolled in Chinese as a second language “in order to get high marks”.

“Senior classes in some long-running L2 Chinese programs have been decimated; this is largely due to the presence of crushing numbers of home speaker learners being assessed as L2, who fill the high score quotas.”

The report added: “There is also evidence that more than a half of those who begin Chinese in primary [school] do not continue in secondary [school] if they have a choice to opt out.”

Why is Mandarin proficiency important for Australia?

Orton said Australians being able to communicate efficiently in Chinese was necessary, not just for business purposes, but for Australia’s overall prosperity and security.

Dines said language proficiency was vital for building trust, especially with people in societies, such as China, where personal trust was more important than “institutional trust.”

“[Australians] have rule of law, whereas in the developing world and places like China, there is very little institutional trust,” he said.

“Trust is intensely personal. So you go nowhere at a political, diplomatic or business level without the capacity to develop trust.”

The Gillard government’s 2012 white paper Australia in the Asian Century intended to plan for the nation’s future within Asia, stating: “The capacity for Australians to build deeper ties with Asia will be hampered if there is not an increase in proficiency of languages other than English.”

“Relying on the language capabilities of Asian-Australians for all of Australia’s relationships and engagement will not be adequate. Proficiency in more than one language is a basic skill of the 21st century.”

7 thoughts on “Are there really only 130 non-Chinese Australians who can speak Mandarin fluently?”