Why is Australia so obsessed with Ned Kelly?

When it comes to tales of daring heists and gun-toting highwaymen, Australian popular mythology has barely scratched the surface.

If you stroll down Gladstone Street in the cosy little Victorian town of Glenrowan, you’ll likely come across the Glenrowan Post Office. You really can’t miss it: it’s guarded by a giant.

Six metres tall, the colossus stands aiming its gigantic rifle, ready to repel invasion from any passing Japanese movie monster that might decide to rampage through Glenrowan. Clad in a long coat against the chilly Hume winters, the giant is impassive as he gazes into the distance, for his face is invisible beneath a massive tin-can helmet.

The huge statue is the centre of attention in the town, overshadowing everything around it — which is appropriate, because the man the statue depicts overshadows every other bushranger who ever took up arms and leapt into the saddle.

Why, when we think “bushranger”, do we think “Kelly”? Why was this one hot-tempered son of an Irish pig-thief anointed by Australia as the singular representative of a whole class of fascinating outlaw whose adventures spanned a century? What, in short, did Ned have that other wild colonial boys didn’t?

Why isn’t our bushranging figurehead Ben Hall, the wronged avenging angel striking out at injustice, who sought to punish only those who deserved it? Why isn’t it Captain Thunderbolt, who rode up hill and down dale with his lady in a gun-toting outback romance? Or Captain Moonlite, who chased excitement his entire life but whose only thoughts at the end were for the man he loved?

Let’s be honest when we give our answer: it’s the hat.

When, as a pre-pubescent history geek, I pored raptly over a large and lavishly illustrated book of my fathers, all about Australia’s fearsome outback highwaymen, it was so much more than the helmet that fired my imagination. Kelly was there, sure, but so were Hall and Thunderbolt and Mad Dog Morgan and the rest. I fell hard for the era of hairy hard-bitten gun-toting men of the bush, who had absconded from civilisation in pursuit of freedom. Like most Australian children, I’d been immersed in the mythology of the American West long before I’d discovered Australia’s own wild colonial days – stumbling upon them was like gaining admission to a new universe in my own backyard.

Not so many miles from where I lay on my stomach on the living room carpet, reverently turning another page, actual honest-to-god bushrangers had roamed – fearsome bandits who galloped across the colonies with guns blazing. In forests and on plains I could see with my own eyes, rugged outlaws had bailed up stagecoaches, just like the reproduction of Tom Roberts’s Bailed Up that hung on our dining room wall.

But in Australia’s Ned-centric view of the bushranging world, not everyone receives the recognition they deserve. What about the little-known story of Harry Power, Ned’s mentor? Power claimed his life of crime began when he was falsely accused of stealing a horse by a pair of German troopers. He turned to highway robbery late in life, after escaping from Pentridge Prison. As the story goes a teenage Ned took care of the horses while Power was pulling his robberies.

What about Martin Cash, who was transported from Ireland after shooting at a man who hit on his girlfriend? Cash claimed that he shot the man in the buttocks and ended up in Sydney, but became a bushranger after being transferred to Van Diemen’s Land. Sentenced to death, Cash was spared at the last minute thanks to public sympathy that had been aroused by his loveable demeanour, and instead of hanging he was sent to Norfolk Island – some people at the time thought this preferable. One of the few bushrangers to die elderly and in bed, he had time before the end to dictate his autobiography, which shot to the top of the bestseller lists.

Then there’s Jessie Hickman, the ring-mistress of Martini’s Buckjumping Show, who killed her husband in self-defence and founded a gang of cattle thieves in the Wollemi Forest in the 1920s – long after bushrangers were supposed to have disappeared. In her youth she was a two-time Australian Rough-riding Champion: a perfect grounding for a bushranger. Jessie was said to have escaped from a locked toilet on a moving train, and stolen cattle from a police holding yard – from what is known about her she seems to have been as much a magician as a bushranger.

Yes, there are countless bushrangers with stories worth telling, filled with derring-do and ripping adventures just like Ned Kelly’s. But their stories are rarely told, and Ned Kelly’s frequently is, because when you start looking at bushrangers, there is simply no escaping Ned. His legacy is like that giant outside the Glenrowan Post Office: impossible to miss.

That’s frustrating as hell, because the history of bushranging is a rich and compelling one that deserves better than to be reduced to the story of a single tin-wearing highwayman, no matter how good at letter writing he was. If all you know of bushrangers is Ned Kelly, you might think that bushranging was simply a matter of heavily armoured Irish Republicans making brave stands at pubs.

That is mythology for you: the true story is first stripped down, trimmed of extraneous and complicated details, morally simplified and streamlined into a digestible narrative. Then, when the truth has become forgotten in favour of the myth, the myth becomes the best available means of reintroducing the truth. The helmet is frustrating to those who want to celebrate the whole cornucopia of bushranging. But if it’s via the helmet that people are led to the cornucopia, God bless Ned and his medieval cosplay.

The bushrangers who blazed a trail for Ned Kelly deserve a mythology of their own. International movie stars should be returning to their Australian homeland to film a big-budget take on the life of Ben Hall. Booker Prize-winning novels should be moulded from the story of Captain Moonlite. Mary Ann Bugg and Frederick Ward should become household names, bywords for legendary romance. Without going nuts and calling for Mick Jagger to play Frank Gardiner, it’s time for a certain correction of the scales that currently have Ned on one side sinking to the ground while everyone else is bunched up on the other, swaying up high in the air.

It’s time to electrify a new generation with tales of the bold brutes who thrilled that young geek all those years ago, when he discovered a new world of adventure looming out of the past, and set himself to exploring it.

This is an edited extract from Mad Dogs and Thunderbolts by Ben Pobjie (Affirm Press), out June 25.

The Stoccos versus the Kelly gang, as told by the media 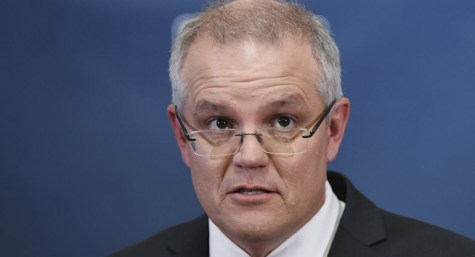 Just look carefully at the photo above. So in order to be ridgy-didge, dinky-di Aussie, do burka wearers only have to fashion their head coverings out of tin? In the modern age would plastic do?

Probably worth investigating. My initial guess is that the media of the time printed copious quantities of facts and fake news about Kelly, giving later historians at least a foothold on the real story. And poor old Fred Ward was maybe tucked away on page five.

I was puzzled as a child as to why the bushrangers were so easily caught in this vast land – why did they hang around for the “big, ugly, fat-necked, wombat-headed, big-bellied, magpie-legged, narrow-hipped, splay-footed sons of Irish bailiffs or English landlords”.
They could have lived free & undisturbed, in a vast land where, once they’d obliterated the original occupants, they would have never have been found.
BTW, how many fathers did Ben have – was he a child of one of these new SSM marriages?
Or was the “lavishly illustrated book of my fathers” some family genealogy tome?

I feel like the bushrangers have received their fair share of time in the historical spotlight – the others might be less famous than Kelly but there has still been a fair bit of ink spilled about all the aforementioned bushrangers & bushranging generally (as indicated by the lavishly illustrated tome referenced in this article). There are so many other stories we could tell, feels a bit misplaced to insist we need more bushranging in Australian historical memory!

As for Ned I agree the hat has helped, but it’s not just a matter of how we have remembered the Kelly gang – it was a HUGE story at the time, he really was a major colonial celebrity, much more so than any other bushranger (for a range of reasons I won’t go into). So his iconic status now isn’t just a matter of warped memory, it was an exceptional bushranging story.

The Melbourne Age’s John Silvester penned a piece fairly recently on Ned and what a horrible bastard he was and again adopted the long held VicPol view that’s trotted out every now and again about Ned and his supposed villainy. Silvester went to some lengths as he does most years in The Age to lament the public adoration of Ned and his killing of Victorian troopers which is fair enough I suppose. I responded to his article basically saying “fair enough” but suggesting one of his future articles should be about the hundreds of indigenous men, women and children murdered by Victorian police in the same century in massacres around the state including in the area where Ned and his gang roamed. These massacres and killings are well documented. Ned’s activities paled into comparison with those of Victorian police in that time. Needless to say I got no response to my suggestion.