There is a melancholy settling across the world, as the consequences of decades of climate inaction reverberate. What can be done to place the impending cataclysm back at the centre of everyday life?

Mid-afternoon, or in the evening, the thinking starts for the next day’s story. You look through a few jotted paragraphs, saved URLs, single-word notes, check the news websites as they turn. Something big, oracular? You’ve done a couple of those on the trot. Opinionated on a cultural issue? Labor Party skullduggery? Something about something that taught you the meaning of something? Grab a news hook to write about something urgent?

Yet all the time at the back of your head there is the simple admonition: you should be writing about, acting on, the crisis. There is now nothing else; or at least there is not not anything that does not have any connection to it.

There’s no current news hook for this piece, though one could have been found easily enough: a rise in deforestation; melting of Himalayan glaciers; permafrost thawing. All aired in the last week or month.

But that’s the problem isn’t it? Or one of them. Such stories just become part of the news carousel, coming round every few days, interspersed with stories on particular events — specific crimes, minor scandals, genuine issues — which are, by their very nature, less encompassing. This gives an entirely distorted image of the relationship between the stories. From day to day, the lead slot on a news site can be occupied by news of a process that promises vast human disaster, even catastrophe, followed by something that will be utterly forgotten in six months.

Paradoxically, the effect is the reverse of what is intended: reporting on the crisis becomes a sort of ghastly anti-entertainment, its genuinely arresting character undermined by its sporadic appearance. It’s as if a local village paper featured a story that a dam above the village were about to burst in three days — and then ran a story on tax cuts on day minus two, and the royal family on day minus one.

But having said that, the question of what to do about it is not so easily answered. World War II is the event most of us reach back to, not unreasonably, as an analogy for the totality of the struggle we face. Yet throughout the war, it was never off the front page. It may not always have been the lead story, but it usually was — and it was never not in the top three. But those were stories about a war that was being fought, whole nations committed to the struggle and unified by it. With the global biosphere crisis, such coverage would be of a war not being fought, breathless updates of the enemy marching across the plain towards us, unhindered. The result would be deeply depressing.

But hell, the result is deeply depressing already. There is a melancholy settling across the world, as the consequences of decades of inaction — and a seeming inability to halt or even slow the most obviously stupid and destructive policies, from land-clearing to over-fishing to emissions — reverberate. In Australia, this is from top to bottom, from actually having an emissions policy to the simple act of protecting a piece of “charismatic fauna” like the koala.

The oldest generation — in their ’80s and ’90s, born in the ’30s and ’20s, grown during the war and before Elvis — appear to be split evenly between those who are passionate about doing something about it, for their great grandchildren, and those who are absolutely happy in a state of total denialism. Dominant themes play through each generation: boomers resort to a lacerating guilt (“we screwed this up, so we must vacate power and watch Netflix and go to restaurants”) gen X irony (“planet’s dying but I still want my MTV”).

Among millennials (set your watch: the first millennials turn 38 this year) and (born about 1997 on), there seems to me to be a very real sense that massive disaster/catastrophe will strike in their lifetime. Though I can recall a pretty gloomy period for gen X around the mid-’80s — Reagan’s “winnable nuclear war” and AIDS hit about the same time — there was a sense that it would either end with a bang or sail through. This is more like a remorseless, relentless disease, occurring slowly but in real time, against which backdrop one is supposed to live a life.

The question of how one mobilises against such an all-encompassing situation is a question for a follow-up piece. The logic of comparing the situation to World War II would be that of a war footing whatever that might mean, and however the institutions of protest might be adapted to it. Part of that would be finding a different way to report on the crisis that takes it out of the daily news carousel, and puts it back at the centre of our lives. The problem is, that as terrifying and potentially annihilating as that war was (the analogy is not unproblematic), we wanted to win that one. This time, we are still battling for the basic unity that would make collective action possible. And soon it will be the late afternoon, and the next edition will have to be thought of. 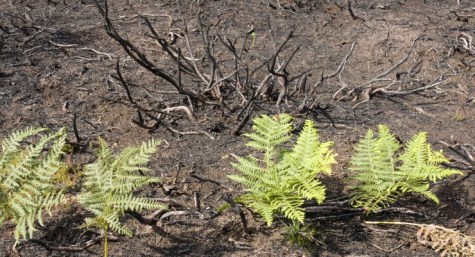 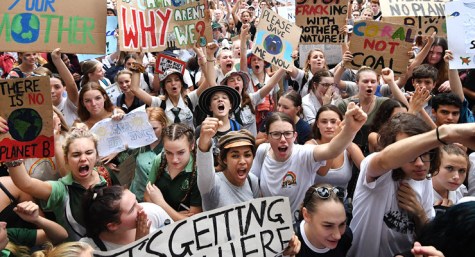 Where is the Mao, the Lenin for climate change?

The analogy is only approximate. The world has had a warning for at least 60 years:

Edward Teller, the ‘father’ of the hydrogen bomb, was warning about fossil fuel induced global warming in 1959.

I remember in school biology watching bacteria on a Petri dish grow quickly then die suddenly, poisoned by their own waste. I’ve wondered ever since if we’re any smarter.

the fossil fuel execs who covered this up over the decades – like big tobacco – should get the guillotine.

That would be too quick and painless.

A brief and insightful analysis.

…and Rachel Carson’s Silent Spring was published in 1962 .

Thank you Guy. I hear you and I agree. This is the most important thing. Please keep writing about it.

yeah, yeah – but it’s much more fun to fiddle

what’s the fate of 6 billion souls between friends

Climate change should not be a news issue. Any change is marginal and brings benefits and costs in equal measure. Also, of course, there is nothing Australia can do about it.

Thanks Chris. I’m really interested in how you and so many arrive at that point. You’ve come to a position of grave importance with a force field of anti-knowledge.

The really interesting question is what drives you and your friends. Your statements are not true, but you cling to them against all evidence.

Why? What’s in it for you? Some strange sense of vengeance against all dem elites?

The situation gets worse while record numbers of babies are born and people who claim to love their children do nothing. I really don’t know how they sleep at night.