Scott Morrison’s appeal to those with a lower level of education more than compensated for his lack of appeal to highly educated Australians.

At the May 18 election, the size of the lower house was expanded from 150 to 151 seats. The Coalition parties won 77 seats (up one since the 2016 election), Labor 68 (down one) and the crossbench six (up one). The Coalition government holds a three-seat majority.

Owing to redistributions and the loss of Wentworth to independent Kerryn Phelps at an October 2018 byelection, the Coalition notionally had 73 seats before the election, a one-seat advantage over Labor. Using this measure, the Coalition gained a net four seats in the election.

The Coalition gained the Queensland seats of Herbert and Longman, the Tasmanian seats of Braddon and Bass, and the New South Wales seat of Lindsay. Labor’s only offsetting gain was the NSW seat of Gilmore. Corangamite and Dunkley are not counted as Labor gains as they were redistributed into notional Labor seats.

The Coalition easily defeated independent challengers in Cowper and Farrer.

While Bandt was re-elected, the Greens went backwards in their other inner-Melbourne target seats of Wills and Cooper. Only in Kooyong did the Greens manage to beat Labor into second.

It was expected the Coalition would do better once the 15 “non-classic” seats were included; these are seats where the final two candidates were not Coalition and Labor. However, 11 of these seats swung to Labor, including a 9.0% swing in Warringah and a 7.9% swing in Wentworth. Eight non-classics were inner-city electorates that tended to swing to Labor. Four of the six states recorded swings to the Coalition in the range from 0.9% to 1.6%. Victoria was the only state that swung to Labor, by 1.3%. Queensland had a 4.3% swing to the Coalition, far larger than any other state. Labor did well to win a majority of NSW seats despite losing the two-party vote convincingly.

Not only did Steggall thump Abbott in Warringah, the electorate’s 9.0% swing to Labor on a two-party basis was the largest swing to Labor in the country. Abbott’s two-party vote percentage of 52.1% was by far the lowest for a conservative candidate against Labor since Warringah’s creation in 1922; the next lowest was 59.5% in 2007.

In Victoria, which swung to Labor, 24.3% of the population had at least a bachelor’s degree in 2016, the highest of any state in the nation.

Some of the swings are explained by contrary swings in 2016, when the Coalition under Malcolm Turnbull performed relatively worse in lower-educated areas and better in higher-educated areas. However, Queensland’s 58.4% two-party vote for the Coalition was 1.4% better than at the 2013 election, even though the national result is 2.0% worse. The large swings to the Coalition in regional Queensland are probably partly due to the Adani coal mine issue.

Since becoming prime minister, Scott Morrison’s Newspoll ratings have been roughly neutral, with about as many people saying they are satisfied with him as those dissatisfied. After Morrison became leader, I suggested on my personal website that the Coalition would struggle with educated voters, and this occurred in the election. However, Morrison’s appeal to those with a lower level of education more than compensated …

Read the rest of this piece over at The Conversation 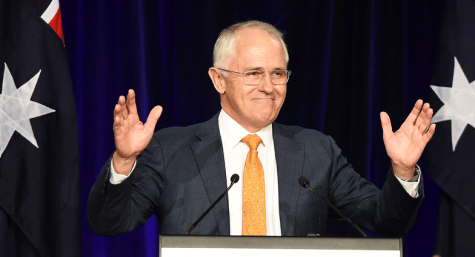 As per HG Wells “Civilization is in a race between education and catastrophe.” Looks like catastrophe is now well ahead, but I pray there will be a miracle that proves me wrong.

A win (from appealing to egocentric gut-feelings) over erudition – come here future.

Ahh- the bliss of the ignorant and uneducated, don’t have to worry about inner city elite problems such as climate change, mental health problems, woman and gay issues etc etc. Just keep driving the twin cab ute and lets go and shoot a few Roo’s!

Conclusion: The inner city luvvies, many in cushy unsackable Government jobs can afford to worry about climate change, diversity and sundry other indulgences; while those who do most of the world’s work worry about how to pay for all this BS.

I wish people would stop using a university degree as a proxy for being “educated”.

We’re telling people that being a tradie is an OK career path, but it looks like you’ll be tagged as “uneducated” for the rest of your life.

With so many bullshit university degrees nowadays, it’s a stretch to infer anyone who went to university as being educated.

Disclaimer: I have degrees in Maths and Statistics (but so what).

I understand that however; what’s your propensity to rally behind the misogynistic, racially vilifying and commies coming over the hill type rhetoric we get from the likes of Christensen, Dutton, Palmer and Hanson? Yep, zero, with a p<0.01 .

So I’m guessing raising levels of education won’t be a long term priority of the Coalition if it is a factor that keeps them in government.