Labor has indicated it is willing to negotiate on the Coalition's income tax plan, and Peter Dutton calls for "sensible discussion" about plans to create new espionage powers. It's the news you need to know, with Rachel Withers.

LABOR COMES TO THE TABLE ON TAXES

Labor has indicated it is willing to negotiate on the latter stages of the Coalition’s $158 billion income tax plan, The Age reports, after the government last week refused to split the bill ($). Shadow treasurer Jim Chalmers has formally written to treasurer Josh Frydenberg, asking for costings for each year of the 10-year plan, with Labor willing to accept the first two stages and debate the third.

The third stage, estimated to cost up to $95 billion over five years, would mainly benefit high income earners, creating a flat tax rate of 30 cents in the dollar for earnings between $45,000 and $200,000. Recent analysis by the Australia Institute has found that $33 billion of that would go to those earning above $180,000, and would benefit men twice as much as women.

Home Affairs minister Peter Dutton says that plans to create new espionage powers are still being considered, calling for a “sensible discussion” on the matter, while labelling the 2018 report by Annika Smethurst which led to her home to be raided “complete nonsense”.

Appearing on the first Insiders since the departure of Barrie Cassidy, Dutton told fill-in host Annabel Crabb that “only just over 30” people had been transferred to Australia under the medivac bill, but that he was unsure if this included refugees charged with serious offences (ASCR CEO Kon Karapanagiotidis took to Twitter to clarify: the number is “ZERO,” and Dutton knows this). Dutton also claimed that the bill creates “quite a broad power” to overrule the minister and that Labor may help repeal the bill, forcing shadow home affairs minister Kristina Keneally to correct him on several fronts.

The government is planning to renew its $20m-a-month contract with controversial Manus security company Paladin, despite its procurement process being under serious investigation, The New Daily reports. Papua New Guinea, meanwhile, wants the Paladin contract cancelled and a transparent tender process instated, with PNG immigration minister Petrus Thomas telling The Australian that the work can and should be given to a locally owned company ($).

The US has now rejected more than 300 of the refugees it was expected to take under a resettlement deal, hampering the Coalition’s goal of closing the detention centres.

The $12 million the ACTU spent, they might as well have gone down the racetrack and gone to the Crown casino and got a better return. It’s pretty bad.

The embattled CFMMEU boss hits out at Labor’s election performance, telling The New Daily that his recent threats to withdraw funding is the real reason he is getting the boot.

Government to investigate why country students are lagging behind

Uncapping uni places boosted opportunities, but not for Indigenous students

Crackdown on abuse of antibiotics ($)

Labor moves to take ‘dodgy donations’ out of council elections

Gobbo got $2m in taxpayer funding for informer case 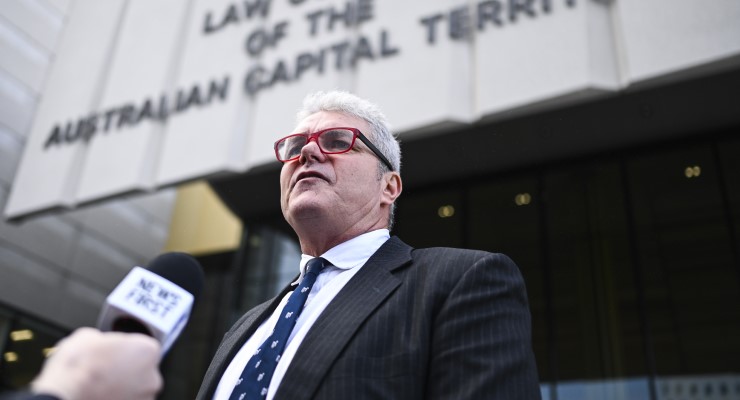 “Intelligence officers are some of the most devoted and patriotic public officials in Australia. A man like Witness K served his country in dangerous places across the world, putting Australia’s interests ahead of his own time and again. Many of his colleagues do exactly the same. And yet, if they dare to call attention to misconduct, corruption or debacles created by their superiors, they are treated as criminals and threatened with longer jail terms than most violent crimes receive. All to spare senior officials and politicians embarrassment and facilitate wrongdoing.”

Staff and students unite against the Ramsay Centre

“Additionally, Ramsay has received chilling support from the Australian alt-right, including The Unshackled, a media platform known for interviewing a smorgasbord of the local far-right (Cottrell, Erikson, Anning) and The Dingoes, a far-right group linked to the neo-Nazi infiltration of the Young Nationals last year. This is largely unsurprising given the alt-right’s own binary construction of “the West and the rest” and Western supremacy being foundational to the movement. Moreover, the right — from mainstream conservatives to the far right — share a scepticism of universities; running a privately funded Western civilisation course through universities would represent, in part, a hostile takeover of the public education system.”

The danger of the ‘irresponsible larrikin’

“Since the be-hatted Katter squawked his way into notoriety in 2012, he’s frequently shielded his nationalistic grandstanding with the aesthetic signifiers of true-blue patriotism (e.g. the dumb hat). Much like Howard did with Hanson in the ’90s, Katter has leveraged the extremism of the rival fringe parties to nullify the toxicity of his own. In a more sensible moment in Australian history [file not found], Katter may have received proper scrutiny. Now, with Katter, it isn’t so much a matter of what he is but what he isn’t. The discourse around him and the KAP tends to be ‘ah, these blokes are harmless’ and ‘Hey! At least they’re not goose-stepping in knight’s armour in the lower house to NSBM!’”

Australia has a China problem and we can’t leave it to faceless spooks – Tony Walker (The Brisbane Times): “Australia has a China problem. It’s not in Beijing. It’s not on the streets of Hong Kong. It’s in Canberra. China policy is in flux, under stress and confused. Australia’s meek response to the pro-democracy mass demonstrations in Hong Kong contrasts with attitudes in its own security establishment that are redolent of a Cold War era.”

Bob Hawke’s funeral left us wondering how Australia lost its momentum ($) – Piers Akerman (The Daily Telegraph): “Setting aside the emotional outpouring engendered by Bob Hawke’s impressive memorial service, a moment’s reflection upon the former Labor PM’s life and times left many Australians wondering how the nation lost the momentum Mr Hawke encouraged. Not his famed ability to swallow a yard of beer nor his notorious womanising, but his ability to see the need for reform and his determination to fight for what he saw as justice without any ifs or buts.”

So I can’t change a flat tyre … let me out of this lethal man trap – Brandon Jack (The Age/SMH):  “I’m a man and I watched Sister Act 2 instead of State of Origin 1. I’m a man and I know nothing about cars so, earlier this year, I had to call a friend to change my flat tyre. I’m a man and I drink cider not beer. (This doesn’t sound like much, but geez I get some eyebrow raises for it.) I’m a man and I read and write poetry. I’m a man and I hate being the centre of a joke. I might laugh it off but things people say sit in my mind and do get to me. I’m a man and I cried when reading the card my girlfriend gave me for my birthday. I’ve also cried after losing football games, at the end of A Star Is Born, and sometimes I’ll just cry for no reason at all – I just want to.”

Jim Chalmers says two-thirds of the debt in the budget was borrowed before the start of the pandemic. Is he correct?

Labor says it’s time for the government to own a bank. Hang on, didn’t it sell one?