So, whose flag story is it?

The Aboriginal flag isn’t the only thing allegedly stolen from Indigenous people this week.

It’s been a busy few days for stories about the Aboriginal flag — a familiar and beloved icon.

Several media outlets reported on Tuesday that Aboriginal businesses are fighting for the right to use the Indigenous flag on their products, after being served “cease and desist” letters from a Queensland clothing company that owns the copyright.

But the Aboriginal flag isn’t the only thing that’s allegedly been stolen. Mainstream media journalists have been accused of taking the story of the case without crediting the initial investigation from Indigenous paper Koori Mail.

On Wednesday June 5, Koori Mail ran an investigation written by reporter Darren Coyne. It revealed that even though the Aboriginal flag was recognised as a flag of national significance by the Australian government in 1995, Queensland company WAM Clothing owns the flag’s copyright.

Coyne’s investigation also showed that the founder of WAM Clothing was the managing director of Birubi Art Pty Ltd. Birubi was found guilty last year of misrepresenting its art products as hand painted by Australian Aboriginal artists, when they were actually made in Indonesia.

Almost a full week later, on June 11, The Australian ran what they claimed was an “exclusive” story about an Aboriginal clothing company, Spark Health. Remy Varga reported that Spark Health was threatened by US-based retailer Gap over use of the word “gap” including the phrase “closing the gap”. Spark Health was also one of the companies to receive a copyright infringement notice from WAM clothing over its inclusion of the Aboriginal flag on its designs.

While The Australian was the first to report on the Gap element of the story, it failed to give any credit to Koori Mail in discussing WAM’s actions.

A similar story in ABC News also failed to attribute the investigation. SBS and The Age where among the few major outlets to credit Coyne for his work.

A statement from the ABC said “the ABC’s reporting of this story did not originate with or take any content from Koori Mail”. 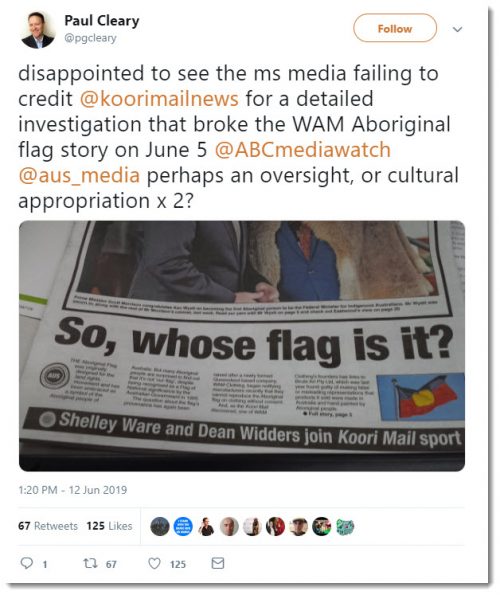 Long-time journalist Paul Cleary was the first to point out the lack of attribution on Twitter, saying it was “perhaps an oversight, or cultural appropriation”. He has previously contributed to The Australian. His concerns were echoed by others on Twitter.

Coyne, who himself is not Aboriginal or Torres Strait Islander, told Crikey it was ironic that The Australian stole a story about Indigenous ownership theft from an Indigenous newspaper.

“I don’t even read The Australian, and I didn’t want to pay 50 cents to even go online and have a look at it. But if they feel the need to steal the story of a small Indigenous paper with all the resources at their disposal, good luck to them. They don’t want to be seen as relying on a small paper like us to get their news leads,” he said.

Coyne acknowledged that The Australian had an angle that he didn’t cover about the copyrighted word “gap”, but said that they didn’t credit the time that went into researching each paragraph of his original investigation.

“I spent a lot of time researching the history of the flag and read the whole court case around the issue of copyright. I spoke to a number of businesses being affected.”

As for Varga, the author of The Australian’s article, Coyne said that “if that’s the way she works — well, we are always looking for cadets — maybe she can jump on board and we can teach her the right way”.

Varga declined to comment on the matter. Crikey couldn’t reach Melbourne editor of The Australian, David King, at time of publishing.

For Indigenous voters, this election is just more of the same

Great opportunity, it seems, for the country to purchase the copyright from WAM and add the flag to its significant public treasures. Now, what’s the story with the Torres Strait island flag? Is a tidy up also required there?

As ANZAC is protected from tawdry commericalism?

The story had a bit of credibility and sympathy worthiness right up until the awful catch all cliche “cultural appropriation”.

What’s with the recent spate of journalists not bothering to cite articles written by Aboriginal and Torres Strait Islander journalists? Is it that hard to cite your sources?

The original Koori Mail article did not, as you incorrectly claim in this article, say that Queensland company WAM Clothing owns the flag’s copyright. It made the explicit point that Harold Thomas is the copyright holder, and that he had granted a licence to WAM. And that is the issue, as it is understood that WAM refuses to release the text of that licence, even though WAM in the Koori Mail story is quoted as saying the company was “committed to supporting Indigenous communities, with an intention to share a portion of its profits to supporting grass roots programs and organisations”.

Hundreds of Aboriginal community organisations use the flag in their activities–which include raising funds to further their activities. Unless WAM proves otherwise, these organisations’ use of the flag printed on clothing may be lost or effectively “taxed” through royalty payments. Presumably, the non-Aboriginal controlled WAM decides which “portion of its profits” it will deign deserving of supporting.

Given Thomas’ previous generous commitments to allowing free use of the image to Aboriginal community groups, on the face of it this new (unseen) licence, controlled by non-Aboriginal interests, may be seen as an unconscionable contract with those community groups that might benefit from their flag.